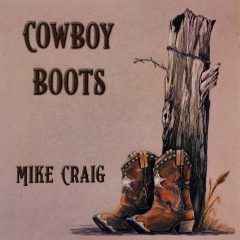 Mike Craig has played bass and sung in San Diego’s seminal cowboy/train acoustic band Trails and Rails for nearly a decade on records like 2015’s Gathering Strays. On that album, Craig wrote seven of the songs, a sign of things to come: he has released his solo debut, Cowboy Boots, featuring 14 Craig originals, all sung by him. Recorded by Jim Soldi at his Outhouse Studios in Ramona, the sound is pristinely captured, retaining the rustic and old-timey vibe of the songs, while focusing mostly on Craig’s born-for-it voice. In various spots, his vox, guitar, and bass fiddle are supplemented by Soldi’s backing vocals, lead guitar, mandolin, accordion, and rhythm instruments, along with help from Trails and Rails’ Walt Richards on backing vocals, guitar, mandolin, and frailing banjo. T&R’s Paula Strong also adds some vocal help, Lenny Bole plays dobro and Scruggs-style banjo, and David Morgan plays steel guitar.

The title says it all—this is cowboy music, put forth by people who can play this genre in their sleep. It is a throwback to the songs played by working men and women who lived and worked under the open sky herding cattle between tough towns, with an appreciation for free spirits, with traditional tales that came down through generations, and lots of time to get really good on wooden instruments. Craig warms up the listener with “Saddle Sweetheart” on the opener, a light-hearted reminder of this music from another time, when lilting, innocent love songs were sung by Gene Autry and Tex Ritter—and never mind the reality that the last singing cowboy movie dates back 65 years. The warmth of the deep harmonies on “Sierra Sunset” might have fit perfectly in one of those Rex Allen movies, a highlight that builds a wonderful story of an encounter with a lover in the high country, packaged in a lovely mandolin package. On “Train Beyond the Veil” Craig’s experience with Trails and Rails helps give heft to a spoken-word poem about a railroad avalanche tragedy in Washington state.

The waltz-beat on “Wonder” is another great moment where the good-time feel of the music grabs the listener, as Craig relates the magic seen in prairie night skies a century ago, triggering a cowboy’s imagination—then mirrors the image with a businessman in our times seeing the same prairie from a jet. The rest of the disc is almost an embarrassment of riches: the title tune about the leather prize of his childhood, “Lupita” about a border romance with a hint of “El Paso.” Another storyboard is “Nine Point Five,” as gunslinger Craig is practicing his draw, “On a scale of one to ten, I was nine point five.” The clever lyrics tell the familiar story of the quiet stranger who comes to town—who is a nine point eight. Another memorable story is “Cactus Candy,” about a frontier woman who is legendary among cowboys, “When you can’t do it, Cactus Candy can.”

Mike Craig’s Cowboy Boots is a lot of fun, and a lot of good music in the bargain.

NATHAN AND JESSIE: You’re the Star