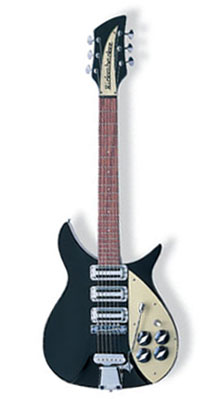 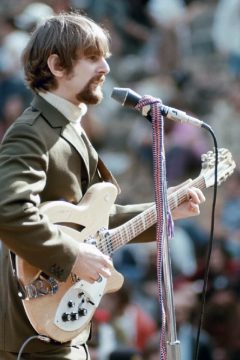 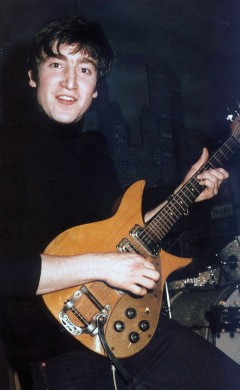 John Lennon and his Rickenbacker

And on the seventh day, God rested…for a while. Then He created the guitar, and saw that it was good. And the ends of the earth were soon covered with dreadnoughts, arch-tops, classicals, and every manner of guitar. Then God smote many of them with a mighty bolt of lightning and they became electric, and they flourished and multiplied. Soon, He looked down and saw Martins and Gretsches, and Gibsons and Fenders across the land. And when He saw the Rickenbacker 360-12, He jammed on it for a few minutes, decided His work was finished, and called it a day.

While the metaphor isn’t meant to offend either the devout or those who are convinced the Lord favored another brand, it serves to illustrate the high place in the pantheon of vintage musical instruments filled by the early-1960s Rickenbackers, or “Ricks” as some musicians call them. These American-made electric guitars had a massive impact on the British invasion sound and folk-rock music and continue to shape music today.

Adolph Rickenbacker (a cousin of the WWI flying ace Eddie) got the Electro String company going in 1931, teaming with steel guitar pioneer George Beauchamp; their sole goal was to perfect and produce electric guitars. During the ’30s they specialized in lap steel guitars, called Rickenbackers, to capitalize on the famous family name, and their best early models were the Frying Pan Model A-25 and Model BD (these are priceless today and are considered perhaps the best lap steels ever made). Rickenbacker arch top Spanish electric guitars were among the earliest available in the ’30s and ’40s, and they produced the first solid-body electric guitar in 1935, but the company’s reputation was still based on Hawaiian, lap steel, and pedal steel guitars. A few years later, with the advent of rock music sending regular electric guitar sales soaring, Electro String had new ownership and the main focus shifted to hollow-body and solid-body electrics and basses.

The 1950s saw the mass production of the now classic Fender and Gibson guitars. Gretsch already had some beautiful hollow-bodied electric guitars favored by Chet Atkins and other country pickers. The Ricks didn’t have the sexy styling of Gibson’s Les Paul model, the wow factor of the Fender’s sleek Stratocaster with its futuristic lines, or the blue-collar cred of that company’s utilitarian game-changer, the Telecaster. Rickenbackers were fairly expensive, and they weren’t artistic triumphs. What they did have was a perfect storm of form and function, adding the company’s own magical electronics (developed from its years as king of the steel guitar makers) to make a sound unavailable on any of the other axes. This clear, ringing tone just couldn’t be pulled out of the twangy Telecaster, which could pick up the ticking second hand on the player’s watch, but not duplicate the ring on treble notes of a Rick. While the Les Paul’s hum-bucking pickups were quieter than the Fender, they yielded a fatter, less sharp tone and couldn’t match a Rickenbacker either. Twelve-string electric guitars were rare, and the resonation obtained by doubling the tones on each string for the Rick 12 string models made for an even more unique sound.

After 1958 the important Rickenbacker guitars were double-cutaway guitars with two pickups (a third was an option). They featured “neck through body” construction, which eliminated a junction between the body and neck of the instrument, and the body and neck were carved from solid maple. The 325 model was a solid body with slick lines that came with an optional vibrato tailpiece at the bridge (now referred to often as a “whammy bar”). The 330 and 360 “Capri” models were semi-hollow bodied, with a sound chamber in the upper part of the guitar body and a “trapeze” tailpieces with an iconic chrome “R”. Features that set them apart from other makes included two truss rods in the guitar neck to prevent it from warping or twisting (most other guitars have one), and “Toaster Top” single-coil pickups. The guitars featured highly lacquered fretboards not really designed for speed shredding, and were available in a wide variety of colors; one of the most popular was a “Fireglo” sunburst finish. More recent Rick guitars and basses come with two output jacks, one for stereo output, separating the pickup sound through two channels.

The Rickenbacker 360-12 was the most revolutionary design, with a headstock that featured tuning pegs for all 12 strings in an ingenious set up with six in standard position and the other six facing the back of the neck, so that a guitarist could tune it much more easily. This model also reversed the previously traditional arrangement of placing the treble string of each two-string set above the bass string. These features, along with its sound, made it the most successful electric 12-string ever — it remains so — and the gold standard for instruments of the type. In the early ’60s, these guitars cost (in today’s money) the equivalent of $2,750 for a 325 and $3,800 for a 360-12. They were worth it.
When the Beatles gave us their Mersey beat, John Lennon was playing a 1958 Rickenbacker model 325 (he later added a 1964 model). The Rick has been referred to as the Beatles’ “secret weapon”; George Harrison’s 1963 12-string 360 model is the source of the compressed, ringing chime that is the signature sound on “A Hard Days Night,” “Eight Days a Week,” “Ticket to Ride,” and numerous album tracks, including his own “If I Needed Someone.” Paul McCartney played a Rickenbacker 4001 bass on their 1965 American tour and much of their middle period music, like “Rain” and the “Magical Mystery Tour” songs and videos. If Rickenbacker had made drums, Ringo probably would have played them. The guitars’ special sound was not lost on other British bands; the ones that had the biggest impact were probably the Searchers and the Who. “My Generation” was recorded with Pete Townshend playing a Rick, as well as “Substitute” and several other early Who tracks. Bassist John Entwistle also played a Rick bass, and a number of Townshend’s axes were shattered to bits at the end of the incendiary band’s early shows (a thought that almost draws tears). The jangling chimes on several Hollies tunes bear the unmistakable sound, as well as “As Tears Go By” by the Rolling Stones.

The Brits were still setting the pace when Dylan went electric in 1965, and folk-rock music became a commercial sensation. And again, right there, in the middle of it all was the Rickenbacker sound. One of the most influential American bands of the decade, the Byrds, played Dylan songs and modeled their instruments directly on the Beatles, building the sound on their first several albums around Roger McGuinn’s Rickenbacker 360 12-string. “Mr Tambourine Man,” “Turn! Turn! Turn!” and other songs were big hits, and were widely imitated. Other pop bands soon followed suit; the Turtles recorded another Dylan folk song with the Rick sound and scored a hit with “It Ain’t Me Babe.” Simon and Garfunkel put out “The Sound of Silence” in 1964 on a folk album that flopped; in mid-1965 a chiming, Rick-sound guitar track and echo effect were tacked on (by someone else) and it went to number one. No surprise. A similar approach was done on “I Am a Rock,” built on a 12-string riff, and it became a number three hit.

Other American bands took note of the British and American phenomena, and even early psychedelic music bands took advantage. Pretty soon, artists like Paul Kantner of the Jefferson Airplane and Steppenwolf’s John Kay were strapping on Rickenbackers. The Rick sound intro to the Byrds’ “I’ll Feel a Whole Lot Better” appears virtually note for note not only at the beginning of the Searchers’ Sonny Bono-penned “Needles and Pins,” but on two seminal garage-psychedelic versions of “Hey Joe” by the Leaves and Love (no way to check if those two were played with Ricks, but they sure sound like it). Like just about every band in 1966, the Byrds covered the iconic tune as well; their “Hey Joe” lacked the intro. They were keen to show the promise of the Rick 360-12 during their psychedelic phase on several tunes, including “Eight Miles High” with its free-form 12-string lead guitar excursions by McGuinn, and its flip side “Why,” the single version of which has superb lead solo breaks resembling an Indian raga, considered a classic by many guitarists, played on a Rickenbacker.

While the British invasion and folk-rock have largely faded into history, Rickenbacker guitars haven’t. Power-pop bands like the Smithereens and others that emulate the Byrds and the Who have found plenty of use for them since the ’60s. R.E.M. guitarist Peter Buck has used Ricks extensively on their albums, as have many alternative bands and musicians, including Johnny Marr of the Smiths and Modest Mouse, and Thom Yorke of Radiohead. Tom Petty and Heartbreakers feature both Petty and lead guitarist Mike Campbell playing various Rickenbackers on many of their recordings and in their live shows. Rickenbacker has marketed a Roger McGuinn model and he still tours regularly playing a Rick 12-string; the actual axe he recorded the Byrds hits with, stolen long ago, is advertised online for $750,000. McCartney is one of many musicians who play Rick basses in concerts, as does Chris Squire from the progressive rock band Yes.

While it isn’t likely that a Rickenbacker guitar will appear in a hard rock, metal, or R&B setting, country, indie, and folk-rock oriented bands still use them extensively — any kind of music that needs a clear, ringing chime. It’s no accident that when the Byrds first covered Bob Dylan’s “Chimes of Freedom,” they did it playing a Rickenbacker 360-12, the way God would have wanted it.

A Conversation with Ingrid Croce and Jimmy Rock