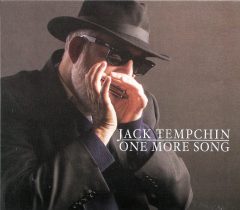 Well known to the SoCal roots scene for decades, Jack Tempchin is known more for songs he has written that other artists have spun into hit covers than for his own albums. Since the ‘70s, he has had an ear for the pulse of modern pop and country/folk-rock to an extent that he has travelled the world, played with many of the top artists of his generation, and had many of them interpret his laid-back and catchy ballads. These include the Eagles (and individual members of that group), George Jones, Johnny Rivers, Emmylou Harris, Glen Campbell, and many others.

His new album, One More Song, batches together a dozen of his tunes to honor his coffeehouse roots here in San Diego. Tempchin wrote the songs over the course of his career, and only three have been recorded previously. They all share the unhurried, ultra-mellow, easy-chair feel of his most famous tracks, like “Peaceful Easy Feeling.” The album reinforces this laid-back vibe with arrangements that are stripped down enough that on eight of the tracks everything is sung and played by just Tempchin and producer Joel Piper.

“Slow Dancing” is a reworking of “Swayin’ to the Music (Slow Dancing),” which Rivers took to the top ten in 1977. This version is slowed way, way down to a folk pace with finger-picked guitars and harmonies. It has the type of infectious hook that can’t be rendered uninvolving, but this arrangement drags. For “Singing in the Streets” it is just Tempchin and his guitar, playing a livelier melody that tells the story of his hungry days as a busker in Europe and SoCal. Its rawness echoes some of Springsteen’s early acoustic efforts.

More elaborate backing musicians are heard on “Around Midnight,” which scores eclectic points as a throwback to jazz sources–and a song Tom Waits would feel comfortable stretching out on. With smoky piano tinkling in between the beats and a spoken bridge, it is a clear highlight. Tempchin adopts a homespun country voice for several tracks, and the autobiographical “So Long My Friend” touches on chapters in his saga, and lessons learned, in Â¾ time, “Some days bring a smile/ Some days bring a tear/ Everybody’s got a message/ For me if I’ll hear.” By the eighth track, “Streets of Midnight,” the laid-back and mellow songs, while done by a real pro, pile up and seem to need a spark of excitement.

That spark never really comes, but there is a sharp country ballad that wouldn’t be out of place in the Jones catalog, “I Got Her Right Where She Wants Me.” The title tune closes matters and stands out, with its lyric, ”I was in a sleazy bar in San Diego/ When the clock said time to go.” It’s a slow, melancholy goodbye to old times in bars no longer standing, with friends now departed, that many locals will identify with. Indeed, One More Song seems like Jack Tempchin’s musical trip of sorts down memory lane, and listeners should enjoy the ride.