August 2022
Vol. 21, No. 11
Dar Williams Talks About her New Album by Terry RolandNovember, 2021
The Lady Doctors Will See You Now by Laura PrebleNovember, 2021
Tiki Oasis Celebrates 20 Years of Exotica Mayhem and Fun  by Andy RasmussenNovember, 2021
Happy Birthday, Jeannie! Jeannie Cheatham Celebrates her 95th Birthday this Month by Jim TrageserNovember, 2021
Zach Caplinger: A Gifted Musician in his Own Right by Dwight WordenNovember, 2021
The Return of IPO San Diego: After a Five-Year Local Hiatus, David Bash’s Unique Music Festival Makes a Much-Anticipated Return by Scott SamuelsNovember, 2021
This Saw Is Not a Tool by Derek ShawNovember, 2021
Our Redneck Poet, Merle Haggard by Mark PulliamNovember, 2021
Linda Hoover: I Mean to Shine by Jon KanisNovember, 2021
Tom Griesgraber: Now a Member of the California Guitar Trio by Paul HomiczNovember, 2021
Advertisements 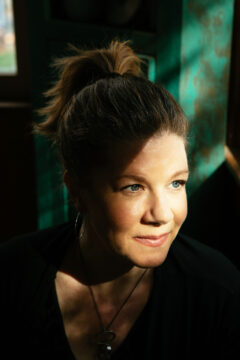 Dar Williams is coming to the Belly Up.

The doorway through which we walk into the poetic-imagination-in-song of Dar Williams on her new album, I’ll Meet You Here, is a confessional conversation with time personified, the opening track, “Time, Be My Friend.” According to Williams the song was conceived doing the ordinary job of sanding a table. Being a singer, she began to harmonize with the sander.
The phrase ‘time be my friend’ came up. “Picking up from the songwriter retreats I’ve done, I started thinking about how I push time to see what’s going to happen next. Time has given us some things very real like the seasons where we cycle through and we see ordinary things that are like gifts…. snow, tomato plants, and my friendships are a real gift. We wouldn’t be who we are if we hadn’t evolved over time.”
Indeed, the album is framed with this insightful song and closes with a reboot of her early milestone “You’re Aging Well,” a celebration of our own swim-upstream-uniqueness through time. The song became an important touchstone for Williams in 1997 when Joan Baez recorded it in a duet with Williams on her album, Gone from Danger. She was invited to tour with the legendary folk singer. Today, at this time in her career, after 30 years of recording and touring, the words resonate with a sense of joy and a touch of melancholy.
Between the opening and closing tracks are eight songs that allow the listener to journey with Dar Williams through lyrical dream-like impressions, stories, and observations of beauty, despair, joy, and a genuine love for life as it is—the good, the bad, and everything else. Williams expresses it succinctly on her website biography, “At some point, you have to meet life where it meets you… I think what the songs on this album all have in common is the willingness to meet life as it arrives.”
In 2017, the singer-songwriter, activist, teacher, and author, released a book that was as profound as it was prescient for the times. What I Found in a Thousand Towns: A Traveling Musician’s Guide to Rebuilding America’s Communities—One Coffee Shop, Dog Run, and Open-Mike Night at a Time tapped into the positive and quiet cooperative communities throughout the nation who were looking past national divisiveness and petty tribal alliances toward cooperation, based on proximity in order to support and help their communities for the better. It was a hopeful sign.
In the time since the release of the book nothing has settled down on the national scene. But, for Dar Williams, the hope lies in the person-to=person understanding and shifts in perspective toward compassion and empathy as we listen to each other. And she sees it happening as she travels through America. 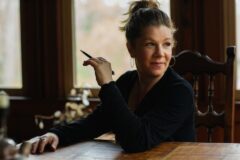 Her first album in six years, I’ll Meet You There, takes us deeper into this solace, solitude, and dream-like poetic visions that point to spiritual growth and acceptance of each other and ourselves. At the album’s center is its guiding wheel, the song “Little Town.” It is from the perspective of one person who opposes the influx of immigrants to rural America. The narrator complains, “this is not a new world, it’s just a little town.” She complains, “It’s not the color of your skin, you’re going much too fast.” Even her friend, the mayor, is now including one of these new people in the plan for their 4th of July celebration. Then, as she describes the passage of each Independence Day, the narrator shifts and accepts the new people and the changes in her community. But there is a wistful sadness to her acceptance.
How long has it been, oh it’s been a long time now
We talk about this town, you’re the mayor of it now
They’re all moving here, everyone comes here
We like to say we don’t get out that much
‘Cause the whole world comes to us
We can’t blame them now, we say, we are just a little great
And you know that I’m not proud
Those things I dared to say out louBut you wave it all away, my friend
The final verse of the song points to the very young, embodied in the mayor’s children, as our way of transition from the narrow nationalistic bias to a more enlightened global awareness:
But my kids, they went off in all directions
And I know it’s thanks to you they have returned
They have all this understanding, all this understanding
They have been the world around
And they came back to our little town
Of “Little Town” Williams, in a recent interview, says: “The media narrative sees people not being able to shift. But I see people every year who do change. The current narrative being reported is of a national paralysis. But people can widen their perspective. I see it all the time. I see people being more agile…the news sees people doubling down. In the song the mayor allows people to make the shift and points in the right directions and so are his kids. There’s a lot of more room for change.”
The album has been carefully crafted in terms of theme, song, and a continuity of production with musical interplay between vocals, keyboards, and stringed instruments, especially a cello. At the musical core is the elegant accompaniment of Bryn Roberts’ piano and Dave Eggar’s cello. Both musicians are currently on tour with Williams. The production serves to enhance Williams unique lyrical gift.
This is apparent on songs like the cinematic “Berkley,” which calls up Allen Ginsberg’s “Howl” and Lawrence Ferlinghetti’s legendary bookstore, City Lights, where the Beat Movement had its roots as she sings:
By the Bay waters
Berkeley’s daughters
Called me to be an Aquarian child
I was the crazed model
For somebody’s novel
Bought from the bookstore where Howl was on trial
The chorus closely references Ginsberg’s famous lines from “Howl.”
I saw the best minds of my generation destroyed by madness, starving hysterical naked. And there we unraveled and dutifully travelled
Out of our minds there
We were out of our minds there
Going out of our minds to find something better
Walking through this new album, this cycle-of-song journey with Dar Williams, is like moving from a dark winter night to early spring where the flowers are waiting to bloom and leaves are appearing on the trees. Each song carries with it a sense of the continued hope that has persevered in the writer’s life….and ours. According to Williams, one of the benefits of the pandemic lockdown is her return to meditation. She describes herself as an over-the-counter Buddhist. “Practice is core in my life at this point,” she said. “I see the songs teaching and reminding me of things I’ve encountered. This album, these songs were not just about the lockdown, but a prologue to how I can approach life differently.”
Dar Williams will be performing at the Music Box, 1337 India St., on Thursday, November 18. Buy your tickets now!

A Life In Music: A Conversation with Andy Cahan