July 2022
Vol. 21, No. 10
Bohemia After Dark: Claudia Russell and the Intimacy of Radio by Laura PrebleMay, 2022
The Return of IPO San Diego: After a Five-Year Local Hiatus, David Bash’s Unique Music Festival Makes a Much-Anticipated Return by Scott SamuelsMay, 2022
This Saw Is Not a Tool by Derek ShawMay, 2022
Our Redneck Poet, Merle Haggard by Mark PulliamMay, 2022
Linda Hoover: I Mean to Shine by Jon KanisMay, 2022
Tom Griesgraber: Now a Member of the California Guitar Trio by Paul HomiczMay, 2022
The San Diego International Fringe Festival is Back! by Laura PrebleMay, 2022
Mary Chapin Carpenter: We Remember Moments Not Days by Terry Paul RolandMay, 2022
Judy Henske: A Remembrance by Barry AlfonsoMay, 2022
KIDS THESE DAYS: Christone “Kingfish” Ingram, Eurovision, and the Aftermath of the Y2K Baby Boom by Raul SandelinMay, 2022
Advertisements 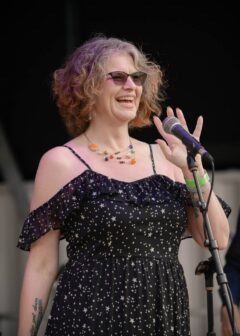 Claudia Russell cuddles a skittish sand-colored Chihuahua in her poncho as we eat breakfast on an outdoor patio at a local bistro. The local goddess of all things jazz, her long hair swept by a slight breeze, pauses mid-bite to tell me this: “curator: that’s the best compliment anyone could ever give me.”
This in response to me telling her that someone had described her that way, as the curator of a vast repository of jazz and ephemera, the cool-cat music that doesn’t quite fit into anyone else’s pigeonhole. After multiple decades working in radio, much of it in San Diego, Russell says she’s in the happiest of places now, hosting her new show Bohemia After Dark on KSDS Jazz 88.3. (The show is featured weeknights from 7–10 p.m.)
“Ken Poston, general manager of KSDS, had the idea for the show and talked to me about it and I loved it immediately,” she says, sipping a Chai latte. “It was appealing for a couple of reasons: I’d been on daytimes throughout my career, but I enjoy being on at night; there’s a different feel to it, playing jazz music for people in the evening.” 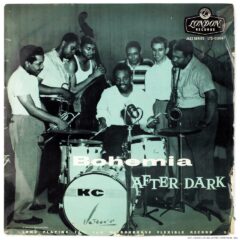 Bohemia After Dark record, from which the name of the radio show is derived.

Bohemia After Dark is unlike any other show that’s been featured on KSDS. It’s a rich stew of straight-ahead jazz, bebop, spoken word poetry over jazz accompaniment, and just whatever seems to fit the aural landscape that Russell is creating at any given time. The moniker originated as the album title of jazz drummer Kenny Clarke’s 1955 live recording at Café Bohemia. This place, smack dab in the middle of Greenwich Village, was a one of the city’s hottest clubs in the mid ’50s, and a hangout for a who’s who of hip artists of the era: Kerouac, Sonny Rollins, Max Roach, Thelonious Monk. Charlie Parker, who lived across the street from the place, offered to play a gig at what had been just a restaurant, and that’s how the Café Bohemia started as a jazz club. He died before he played the gig, but the hype was enough to launch the venue. The tune “Bohemia After Dark,” written by Oscar Pettiford, is named for the club; Cannonball Adderley played the tune right there in the club, making his national debut.
To program this aural kaleidoscope, Russell uses her talents and experience as well as her deep knowledge of the obscure and unusual, to create a mix that’s different every night. “While [Poston] had the title idea, it was right up my alley,” Russell says. “I always like to do things that are a little eclectic: more epic, longer pieces, long jams. I like to end the show with one long, live piece. I love having the ability to play pieces like that.”
While the show still primarily features jazz tunes of all stripes, Russell notes that she shares things that are connected to jazz, too, and may not fit the straight-ahead definition. “I’d been focused on a straight-ahead sound, but I’m branching out into spoken word artists, and also it’s a lot of fun to include the beat era, things from the ’50s and ’60s, things that are eternally hip. But I’m looking forward to expanding my own knowledge base. I’m playing things you never hear on the radio, all connected to jazz, a little eclectic, all kinds of flavors involved, from hip hop, Latin, rock ‘n’ roll.” 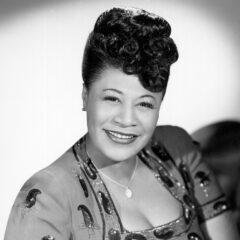 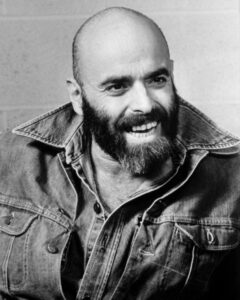 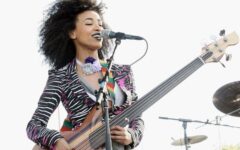 As an example, you can browse the archived playlists for the show and see the range of material that Russell uses to paint her sonic soundscape. You’ll see such contemporary jazz heavy hitters as Wayne Shorter, Esperanza Spalding, and The Bad Plus as well as Avant Garde musicians Sun Ra and Hailey Niswanger’s band Mae Sun sharing the airwaves with blues legends Blossom Dearie, John Mayall, and Howlin’ Wolf. You’ll hear some Tom Waits, some Rickie Lee Jones, some Joni Mitchell, Sinatra, some old-school big band singers like Jo Stafford and June Christie, even Shel Silverstein (yeah, the guy who wrote The Giving Tree!) “I am concentrating on finding more contemporary things too—but I want to get that groove established, get people on board.”
That’s not to say that the old faves aren’t mixed in there too. There is plenty of straight-ahead and bebop for the fans of Ellington, Ella, Billie, and Coltrane, Miles, Dizzy, and Chet Baker. Some nights you’ll hear a whole set from one artist, or a block of songs from one particular band. Other nights, you might get several versions of the same song from different artists who have very different takes on the material. The beauty of it, Russell says, is that human element: the element of intuition, the synaptic connections between genres, songs, artists, years, something a computer-generated algorithm just cannot replicate.
In an age where Spotify and Pandora seem to be the go-to music sources for many people, shows like Bohemia After Dark are human-programmed, and that is an intentional choice. This personal connection to listeners is one reason Claudia Russell has been so successful in radio for so many years. Her jazz purr is recognizable, and when she curates a show, she strives to make it sound like she’s talking to you, a friend, over a cocktail or tea.
Although she understands the appeal and ease of things like Spotify, she defends the human touch. “No algorithm can respond to something in the moment,” she says. “A computer can’t put things together in the same way as a person. Programming has a lot of intuition in it. What makes Jazz 88 work is that we’re organic. We’re human beings who’ve been in radio a long time, and we understand…it’s you and me, kid.”
“I may have thousands of people listening, but you are only listening to me and the music I’m sharing with you. I don’t imagine a large audience. I imagine one person listening to Jazz 88.” She compares it to the days when people bought new records or tapes and got together to share music with each other, when creating mix tapes or burning CDs for friends was the way to pass around new music. But in this case, Claudia is your cool friend and she has access to dozens and dozens of the coolest stuff you never heard. 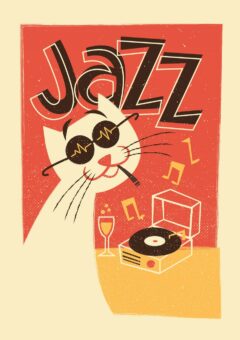 Her intuition and her vast knowledge of music of all types means that we, the listeners, get to benefit from serendipity. On any given show, Russell usually has a loose plan, but she leaves herself open to whatever happens in the moment and can change her plan within the length of a track. “A few weeks ago, one of my colleagues, Larry Murry, handed me this Dmitri Metheny CD that’s been around a long time; it’s jazz noir, with a really cool spoken word piece in it, and I’d never heard it. I played it on the show. Then I got an email from someone that night loving it. You have to be open to serendipity.”
“A lot of what I’m doing is spontaneous and there are a couple of us that program like that,” she says of her Jazz 88 colleagues. “I’m in the moment, very much ‘this song reminds me of this song’…it’s very improvisational.” She compares this way of programming to a visual “found artist” like Louise Nevelson or Marcel Duchamp who created art with objects they found in life. “I take amazing pieces and create a larger piece from that,” Russell notes. “That’s what keeps it alive. For me, personally, I go in with a skeletal framework, and I build everything around that. There are times when I know I want to use these three songs back-to-back in a specific set. Other times, then, I’ll give myself a launching point sometimes for each set (20 minutes or so) and I use those breaks in between to transition to change the flavor.”
Another unique aspect of Bohemia After Dark is that Russell programs in local jazz artists too. When their birthdays roll around, local jazz greats can expect a set of tunes featured to honor their next year ‘round the sun, or they might be tossed in with the daily sound salad on any given day. This month alone, locals Lori Bell, Holly Hoffman, Chris Klich, Gregory Page, Mike Wofford, and Sue Palmer all made appearances on the playlist.
“I feel a little bit like I’m that circular piece in a box of Tinker Toys,” Russell says. “I’m the center and all these pieces extend from me, like the wooden rods like spokes that come off the wheel are all the different types of music. I’m the wheel connecting audiences to musicians, giving you things you’ve forgotten you’ve loved.”
And audiences from all over the world have responded. “People send me messages and it’s been interesting to me since the new show started, the number of emails and phone calls I’ve been getting,” she notes. “I haven’t heard from an audience like that in a long time. I have a very faithful listener somewhere in Michigan, someone from Australia.” 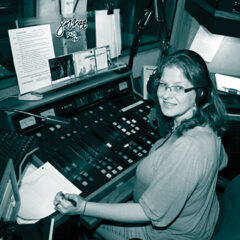 Claudia Russell in the Jazz 88.3 studio. Photo by Dennnis Andersen.

“It’s nice to hear from people. At this point in our society, if someone takes two minutes to write and compliment you, that is a really big thing. Seems like generally people are so quick to find a critique, to find a criticism or a complaint; if someone takes time to tell you thank you for playing something, it means a lot. When I get a message like ‘I was having a tough day, this made it better’ or someone calls and says, ‘what I’m dealing with just got a little easier because I tuned in to the show,’ those have meant the most to me. That goes back to what a personal medium radio is.”
For the future, the Jazz Kitty hopes to bring people into the studio for live interviews or even jam sessions. Because of Covid, visitors to the City College (the broadcast home of KSDS) campus have been restricted, but she’s hoping that changes soon. “I’m currently educating myself on contemporary poets but I’m looking at continuing my education, and once we feel it’s safe and guests are allowed in, I want to interview musicians, but it would be wonderful to have spoken word features on a regular basis, or maybe some in with their cajon (a percussion instrument) and opening the doors and inviting the community in.”
“I have a short list of groups in town, events in town I want to give some airtime to, and that is probably the biggest thing that is on my mind,” she says. “Next on the agenda is breathing more community life into the program.”
The fact is, if you tune into Bohemia After Dark, it’s a lot like a box of chocolates. You never know what you’re going to get, but you can bet it will be delicious, decadent, and it will leave you craving more.

Youth Arts Academy Shines Like Superstars at the Music Box

Farewell to the Pannikin and Coffee Culture as We Knew It