February 2023
Vol. 22, No. 5
You Play Pretty Good for a Girl! The Rise of the Female Bass Player by Paul HormickJuly 2015
Jeff Beck: A Tribute by Ted BurkeJuly 2015
Marcus Petronius Bashore: The Best Seat in the House by T.E. MattoxJuly 2015
Pacific Wave: A Surfin’ Safari July 2015
The Winter Dance Party 1959: The Night the Music Lived by Terry RolandJuly 2015
Back with a Bang! Java Joe's Reunion at San Diego Folk Heritage by J.T. MoringJuly 2015
Book Review: The Philosophy of Modern Song by Bob Dylan by Ted BurkeJuly 2015
Rick Nash: Bass Man in Demand by Wayne RikerJuly 2015
If Music Be the Food of Love, Play On: Dually Noted Pairs Fine Food and Fine Music by Paul HomiczJuly 2015
Mod Revivalists the Trebels to Reunite for 40th Anniversary Show by Jim TrageserJuly 2015
Advertisements 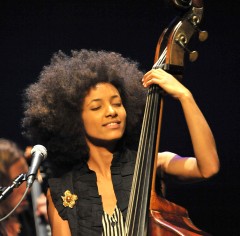 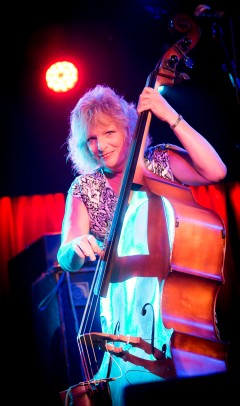 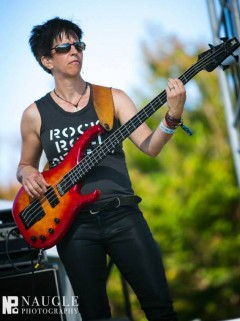 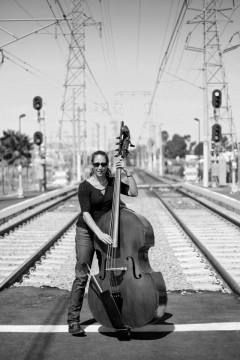 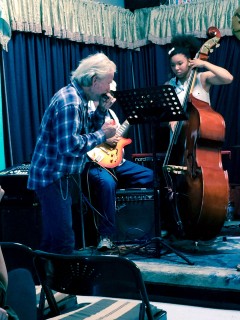 Women make up the soprano and alto sections of the chorus, while men sing tenor, baritone, and bass. Testosterone in the bloodstream can make for some low, low notes. So the assumption might very well be that the lower notes always belong to the men, that they are the musicians to play the tuba, sousaphone, and the bass.

But just because men have low voices, does not mean that men are always the ones to play the bass. And just because men are big and muscular does not mean that they alone can lug around the large instruments or pluck those big, big strings. That stereotype was broken, albeit behind the scenes, more than 50 years ago when Carol Kaye was the bassist for the Wrecking Crew and recorded on hundreds of hit songs, as well as television and movie soundtracks.

Currently Esperanza Spalding has become one of the most prominent bassists, male or female, in the jazz scene today. And Kristen Korb, who studied the bass and resided in San Diego for several years, tours the world as a vocalist and jazz bassist.

Though men comprise the majority of the bassists in San Diego, there are several talented female bassists here as well. Recently I chatted with three of them who shared with me their love of music, their love of the bass, and the occasional prejudices of being female and supporting the bottom end of the band or ensemble.

Jodie Hill has been part of the music scene here in San Diego for a number of years. She regularly performs with Whitney Shay, one of the busiest vocalists in town. She plays bass for both the Jazz Katz Project and the Gypsy Swing Katz, the former a 14-piece big band and the latter a Django Reinhardt-type Gypsy jazz band. Hill is part of the10-piece horn band Sonic Epidemic and an Americana band called Enter the Blue Sky.

Hill’s choice of the bass was pretty simple. “I saw the Beatles on the Ed Sullivan Show, fell in love with Paul, and it was the bass from thereon after,” says the Columbus, Ohio native.

Besides the influence of the Beatles, Hill grew up in a musical home. Her father was a drummer and her mother played the piano. Hill’s father was also a big jazz fan and audiophile. “Dad was that typical unemotional sort. So a lot of the time I spent bonding with him were times of just kicking back and listening to music,” she says.

Hill worked cleaning mobile homes and saved up enough money to buy an electric bass and amplifier. “I had a Hangstrom bass and a Supro amplifier,” she says. “The amp was so big and heavy that my dad would have to help me getting it to gigs!” A typical musical enthusiast, she hung out at the local music store, where she found a used upright bass that she was able to buy for $500. Painted completely black, Hill removed the paint to find a very good quality German made bass. The bass remained her main instrument for decades until she replaced the bass with a high quality bass, which was custom made for her

After a couple years on the road with a rock band or two, Hill attended Berklee College of Music in Boston. She launched a career making jingles in Indianapolis and then headed off to New York City, where she recorded for K-Tel Records (remember the records that weren’t by the famous bands but sounded just like the famous bands?) and found a great deal of work in weddings, playing more than 125 nuptials a year. “Sometimes I would play five weddings in a weekend,” she says. “I got so busy I had to hire a guy to lug my gear around.”

Hill sees the music scene in San Diego as being in some respects better than that of New York. “There are a lot of places to play here. The big places in New York are only interested in you if you’re famous,” she says. As to encountering sexism, Hill says that things are much better than when she was playing in the seventies and eighties. “But there were times I’m sure I didn’t get the gig because I was a gal.”

San Diego native Kelly Bowen has been a bassist for 29 years, and for her the choice of the bass was pretty much a given. “I like the sound. I like how the bass ties everything together. I enjoy the subtleties that are part of the sound and playing the bass. When I was a kid, I had been playing classical piano. A friend came over with a guitar one day and he was playing rock ‘n’ roll, and I thought, ‘I like this!’ I started listening to the music and figured out that I liked the bass. At a Rush concert when I was 16, I saw Geddy Lee and that was it. That’s when I thought, ‘I want to do that.’”

Besides numerous pick-up gigs and sub jobs, Bowen has performed overseas, once opening for Desorden Publico, a Latin American ska band for a sold-out concert in Venezuela. She has performed with jazz vocalist Flora Purim, who is well known for her work with Chick Corea.

The San Diego native attended Berklee School of Music for a couple years, describing the experience as intense. She says, “You are so immersed in music, constantly, in class as well as outside of class when you’re studying or gigging.”

Bowen feels that she is not currently the recipient of prejudices about females and the bass. “But back when I first got started, I must have gotten it a million times,” she says. “Then again, I think it was partly because I was not self-confident back then.” One of the most egregious case of musical male chauvinism was when Bowen was shopping for a bass. The male clerk at the music store insisted on playing a bass for her instead of having Bowen check out the instrument for herself.

It has been more the audience, rather than fellow musicians, who seemed to be mystified that Bowen was both a woman and a bassist. “People would come up to me after a show. They would shake my hand and say something like, ‘Damn, you’re a girl. And you can really play!’”

Susan Wulff, the associate principle bass with the San Diego Symphony Orchestra, feels that sexism has not gotten in the way of her pursuing her career as a bassist. She admits that when she was younger she felt some unwelcome pushback when she was part of the pit orchestra in an opera. “But that was probably from some older players feeling threatened by this younger player,” she says.

Wulff started playing electric bass when she and her brother and two sisters formed a rock cover band when she was 12 years old. “My brother played guitar. My sister and I played piano. When my mom suggested the bass to me I figured, ‘Okay fine. Let’s try this.’”

Since the bass was unavailable in her junior high school band, she played the trombone. “I’ve always been attracted to the instruments at the lower end. It’s where everything is — the groove, the harmony, and the time,” she says.

The prize for winning a music competition in her hometown of Sacramento was free music lessons on the upright bass. Only three lessons later, with the encouragement of her bass teacher, the 16-year-old Susan found herself auditioning for a position in the bass section of the Sacramento State University’s Orchestra. “I had never even listened to classical music. I knew nothing about Mozart or Brahms and they were handing me a piece of classical music to play.”

An up and coming bassist is 16-year-old Angelica Yume Pruitt. The Mission Bay High School student had started out playing violin but switched to bass in junior high school. “I started playing the bass because it’s the opposite of the violin. I thought that by playing the bass, I’d get better at the violin, but I never got back to the violin,” she says.

With Esperanza Spalding and Ray Brown as musical role models, Pruitt enjoys the challenge that playing the bass offers. “Not a lot of people play upright, and it can be a real workout,” she says, describing the physicality of pressing the large strings down to the fingerboard and getting her hand up and down the long neck.

Pruitt says, “I like how deep the tone of the bass can be. For a while I had wanted to play the cello, but the bass can get as high as a cello. So the bass gives me more variety. It can go high, but lower than most instruments.”

Even in the 21st century girls can still be breaking down the doors of tradition and sexism. Pruitt became the first girl, as a freshman, to make it into Mission Bay High School’s old-time jazz band.

Anticipating a life with music, Pruitt plans on majoring in music in college. She has also planted her musical feet firmly in both classical and jazz. She is a member of the San Diego Youth Symphony and goes to as many jazz jams as she can in a week. “There’s a jazz jam for beginners and intermediate players at Java Joe’s, and I go to Old Venice in Point Loma. I also go to Proud Mary’s and House of Blues. My mom is a real soldier getting me around.”

Hill believes that Pruitt and other girls and young women who want to become bassists should become the best all around players that they can be. They should learn to play both the electric and upright bass and learn to play in all styles. “And you should certainly learn to read music. You’re not going to just be playing rock and roll.” Bowen agrees that girls should not let stereotypes restrict their options.

Wulff is already seeing the result of changing attitudes. She was recently teaching a master class at a “bass bash” in San Francisco. “With this class of elementary and high school students I would guess that about 40 percent of the bass students were girls. There was one little girl she had to sit on a stool to reach the bass, but she was playing it!”

The Sun Shines All the Time Here: Barbara Nesbitt Returns for Reunion Show