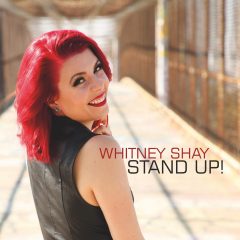 Young Ms. Shay is a phenomenon who is clearly on an upward trajectory. The four-time San Diego Music Award winner (she nabbed Artist of the Year and Best Blues Album in 2019) recently became that most-rare musician: one with an actual recording contract—having inked a deal with respected German independent blues music label Ruf records last year.

On the heels of 2018’s A Woman Rules The World (Little Village Foundation) comes Shay’s debut for the new label Stand Up!—documented at Wire Recording Studio in Austin, Texas. The album was produced and arranged by Mark “Kaz” Kazanoff, who also plays in the band’s quite lethal “Texas Horns” section. He’s one of the reasons that this album consistently explodes right into the listener’s face.

Of the 12 songs on Stand Up!, 10 were penned by Shay and her writing partner Adam J. Eros, along side two non-original gems that unify the sense of purpose throughout. And what is that purpose? Apparently, it’s a “throwback” to a grittier era of American roots music, where the music of Otis Redding and Etta James flourished in small studios in the south, à la Muscle Shoals, Alabama, or the Stax studios in Memphis, Tennessee.

Aside from the geography, one of the elements that makes everything rock is the sterling backup band, which features the livewire guitar slinger Laura Chavez, keyboardist Red Young, and the rest of those Texas Horns: John Mills on baritone saxophones and Al Gomez on trumpet.

Shay’s got an authentic growl that she employs with aplomb on the title track, which also features a tasty, jazzy solo from Chavez. Guest guitarist Derek O’Brien lays down a wicked slide solo on “Equal Ground” to complement the vocalist’s husky delivery.

I was floored by Shay’s first ballad on the disc, “I Thought We Were Through.” Organ and horns frame her gorgeous narrative and Kazanoff solos beautifully. On “Tell The Truth,” the hornman lifts the bandstand with an almost Junior Walker-esque episode, followed by a sweet Red Young essay.
Worth its weight in gold is the second ballad, “I Never Meant to Love Him,” a scorcher in the tradition of Etta James (think “I’d Rather Go Blind” for context.) That one gave me goosebumps and should serve as a calling card for Ms. Shay throughout these next phases of what will undoubtedly be a five-star career.

Stand Up! If you love the blues—this is required listening.