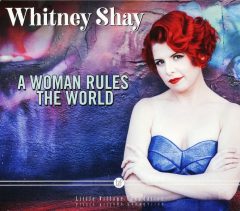 Whitney Shay has been tearing up the stages of San Diego for quite a few years now, the petite and elegant songstress applying her impressive pipes to a variety of musical styles in a multitude of collaborations. Show tunes, torch songs, ballads, classic rock ‘n’ roll, and soul, and blues are only some the styles the charismatic Shay selects from; in all of them, her voice wails, growls, soars, whispers, and croons as the material requires. Shay keeps it moving, driving, continually shifting the pieces on the chessboard and consistently works with the best musicians available. Her new record, A Woman Rules the World, is no exception, being essentially a blues and R&B project, with a band of A-List players, including Christoffer Anderson (guitar), Jim Pugh (organ/piano), Kedar Roy (bass), Alex Pettersen (drums), and Gordon Beadle (saxophones). The outfit, which handles its duties with a seeming organic blend, swing, and soulfulness, brings a contagious verve to this record, which, as the title suggests, is a bluesy, gospel-tinged declaration of a woman’s right to exclaim her blues. Shay co-wrote four of the album’s ten songs (with Adam J. Eros) and begins this heated session with the unmistakable assertion “Ain’t No Weak Woman.” A straight-up strut of self-definition, the band bristles and boils over with a groove of assertive funk as Shay delivers the news that you underestimate women at your own peril.

The title song, written by one D. LaSalle, amounts to a feminist version of James Brown’s 1966 classic, the fatally patronizing “It’s a Man’s World.” While Brown tried to explain away male chauvinism at his song’s midpoint with a haphazard tribute to women for their ability to bear children, Shay’s reading of the lyric, slowly and dramatically paced, pushes the condescension to the side and lays out the facts of being a woman in the world of men. It’s not a lecture, but a testimonial. The album isn’t just inspired polemic, though, but also funky, joyful, very sexy indeed, sexy as in the song “Get It When I Want It,” a funk blues extravaganza with a trace of New Orleans heat that highlights Whitney wittily making it clear that what she needs from a lover has to be good, great, greater, greatest, consistent, and on time. The emotions Shay puts across through the lyrics run the full range of how one feels in an imperfect relationship and in one of her original songs, “Empty Hand,” a soulful Percy Sledge/Sam Cook-like ballad, she addresses a paramour who’s continually let his end of the bargain fall to the floor. “I’m not done with you baby,” she wails, seeming to, just for today, give it one more try.

A Woman Rules the World is full of surprises, with ten hot selections grounded in the traditions of blues, R&B, and gospel. Whitney Shay has a voice that channels these styles, while still making it her own. The sublime band, and the guest artists, have made a record that is fun and feisty, ideal for raising the roof.

A Woman Rules the World CD release takes place at the Belly Up on September 16. The Sleepwalkers open.