January 2023
Vol. 22, No. 4
What, When, Where, and How Much? The Ballad of Mighty Joe Longa by Chuck SchieleNovember 2008
Back with a Bang! Java Joe's Reunion at San Diego Folk Heritage by J.T. MoringNovember 2008
Book Review: The Philosophy of Modern Song by Bob Dylan by Ted BurkeNovember 2008
Rick Nash: Bass Man in Demand by Wayne RikerNovember 2008
If Music Be the Food of Love, Play On: Dually Noted Pairs Fine Food and Fine Music by Paul HomiczNovember 2008
Mod Revivalists the Trebels to Reunite for 40th Anniversary Show by Jim TrageserNovember 2008
Harold in the Land of Jazz by Bart MendozaNovember 2008
Sephardic Dance and Music by Yale StromNovember 2008
Loretta Lynn: A Special Tribute to the Queen of Honky Tonk by Terry Paul RolandNovember 2008
Ben Grace Gilmore: It's All About Building Community by Sandé LollisNovember 2008
Advertisements 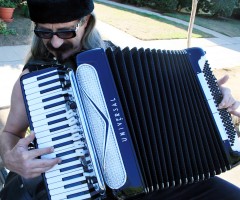 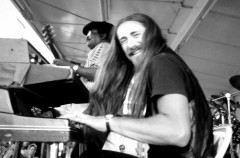 The first time I saw Joe Longa — aka Mighty Joe (a moniker that is understood when you witness his music. I use the word “witness” intentionally, because with Mighty Joe, total witnessing requires both eyes and both ears).

The first time I saw Mighty Joe, he was on his knees. Kicking ass. It was one of those “Woah!” moments where you forget what you were just thinking about and stop in your tracks, staring. He was up there as a Mental in Joey Harris’ band just havin’ a ball, playing the livin’ rip out of a Hammond B3 as the dudes rolled through rocker after rocker. (I suggest you all see this band by the way… there is something missing in today’s music that remains in a band like Joey’s. I don’t have the space to discuss this here. Just go and see them if you feel what I’m talking about.)

Since that time we’ve gotten to know each other more and more, usually hanging in an alley near a backstage door when we’re on the same billing. Somewhere along the line, Mighty Joe and I figured out that we’re both from upstate New York, so we’re always saying to each other, “Hey, remember that band Duke Jupiter?” and stuff like that… We would both kill to go to a real East Coast clam bake, which the West Coast is incapable of. Ironically, we live four blocks from each other in the same neighborhood in Ocean Beach. Both of us being “OBecians,” it made sense to go get some fish tacos at the Southbeach, our favorite neighborhood beach bar. He walked on over to my house, and from there we hoofed it to lunch.

“Man, I’m starving,” he said, offering a big smile as he crosses the street.

He hands me a tape “from the old days” and we start talking.

And Joe started to tell me stories, beginning there — gigs, tours, the folks he’s played with. Before ya know it, we were settled in with tacos, beer, fish and chips, and a pile of jalapeÃ±o shrimp poppers.

CS: I don’t know where you began your music? Did you go to school or something?

MJ: I grew up in Endicott, New York. Both my grandfathers played harmonica. One was Polish and the other was Czech. My Czech pop gave me a chromatic harp when I was a kid and showed me a couple of weird folk songs. I played drums in a marching fife and drum corps early on. I did trumpet from third to sixth grade in school. My mom always had a radio or a record playing and was always singing. They got me a VOX Continental organ in seventh grade from my cousin, Dave. He had a great band called Basket of Flowers that actually recorded a single around ’66 and played all around the tri-state area. One day his bass player missed practice so he showed me the bass parts to “Louie Louie” and “Farmer John” and I got to play with his group.

I was hooked! I never took any lessons, but when I heard Jimmy Smith and Otis Spann records in high school it was all over. I learned by listening.

Ronnie Dio (Corning, NY) and his group the Elves used to play at our junior high dances. I also knew Mark DeCerbo (Four Eyes) from the boy’s choir at school. I also did a few gigs with Gary Wilson. In college I was a DJ on the radio and played in a country western band.

CS: How’d you get to San Diego?

MJ: In ’75, me and my buddies moved to San Diego. DeCerbo had already migrated here. We started a band called Copenhagen and played Webb’s (now Winston’s) and the Elbow Room (now 7-10 Club) along with every dive bar, military base, and keg party possible. I also met Tomcat [Courtney] that year. In ’77 we recorded a 45 and then I went on tour with Doug Kershaw and the Ragin’ Cajun Fiddle Player all over the U.S. and Canada. I also recorded a 45 with Gary Wilson and the Blind Dates in ’78 at Accusound Studio, with John Hildebrand as engineer. In ’78, with Bottino and Haney, we would also back Tomcat. I played several punk shows with Gary and the Blind Dates where everyone hated us. We went to NYC in ’79 and headlined at CBGB’s for two nights of insanity.

MJ: Then the band called it.

In 1980 I did a stint with King Biscuit Blues Band, the Branded band featuring Vic Gross. I was also playing with Tomcat every Thursday at the Texas Teehouse in OB. The Blind Dates morphed into the Swinging Dates, a trio that played all summer at the Surfer Hotel in Pacific Beach right on the boardwalk. By ’82 we were called the Untouchables.

In ’85 Buddy Blue called me and told me he was starting a blue-eyed soul group and needed an organ player. That started the Jacks with Chris Sullivan on bass (Penetrators and Farmers) Jack Pinney on drums (Iron Butterfly, Jerry Raney and the Shames).

In ’87 we recorded Jacks Are Wild on Rounder records. I also recorded with Mojo Nixon that year. In ’89 I recorded with Skid Roper and played at Mojo Nixon’s wedding with Country Dick as the preacher in the middle of a go-kart track in Chula Vista.

CS: …So with all this giggage, was there ever a time where some chick came in dressed as an alien, danced on the tables, and knocked your beer into your amp?

MJ: Oh God, is she still around? Yeah, weird stuff happens at gigs. I was in the Copenhagen band, and we were playing a wedding reception at the Bahia. During the reception the bride’s ex-boyfriend showed up drunk with a big wet spot on the front of his pants. He went up to the groom and started yelling profanities. From there, the bride’s father jumps him, tackles him onto the floor, started rolling around, and then some of the wedding party joined the rumble. One girl’s gown was completely ripped off. They managed to knock over the wedding cake and roll onto it. They also knocked over one of the buffet tables with all the food on it. Hotel security intervened, called the cops, and we left as soon as we could. Everybody really liked the band.

CS: Love it. What gear do you play?

CS: You said you really didn’t take lessons. How does the music come to you? Where do you begin?

MJ: The music is always there. You have to keep out of its way and let it emerge. The more you think while playing, the less real music you will get. You have to clear your mind and suspend your ego — and allow the energy to encompass you.

MJ: Say you come to a raging river. You can try to go straight across, fighting the current, or dive in racing down stream with the current, easily reaching the other side. Just get out before you go over the waterfalls. And practice at least two hours every day.

CS: Ah, there it is: it begins with a killer work ethic. You’ve seen the world of music undergo a formidable revision in how things get done. You’re still in the game. What do you think about the changes you’ve seen along the way, and how you survive the grueling side of music biz.

MJ: I still like vinyl versus digital sound. Don’t lose it, man

CS: Whaddya have to say about the San Diego music scene?

CS: [laughs] Okay, let’s try this one: most rewarding moment in music?

MJ: It was 1988. I was playing with Buddy Blue and the Jacks. It was the end of July and we had a SOLD OUT show at Rio’s.

CS: Ah, Rio’s. Buddy booked my band there once. He was impressed that I got 23 people in the door on a Tuesday, around midnight. I asked him, “Really?”

MJ: We didn’t go on ’til midnight so I was home until about 11pm. My beautiful wife Jeanne was pregnant at the time. Just as I got up to go to the gig, we thought she was going into labor. I called the doctor and he said, “Don’t sweat it.” But I totally freaked out and Jeanne told me to just go do the gig like I always did. Reluctantly, I drove to the club. The place was rockin’ to the roof, totally sold out. I made my way to the dressing room/kitchen and saw Buddy. He said, “Hey man, you look trashed! What the hell is wrong with you? You look like you’ve seen a ghost.” I explained to him the situation and he immediately produced a bottle of Jack Daniels. We each took a couple big slugs and he ordered me to leave the bar and go back home. As I was leaving, he announced over the PA, “I have some good news and bad news. The bad news is we’re not going to play tonight; the good news is Mighty Joe’s wife is having a baby. And all drinks are half price for the rest of the night.” The crowd went wild. I rushed home and to the hospital. Our daughter, Lita, was born.

She now shreds on lead guitar, watch for her in the future.

CS: Why do you play?

MJ: To maintain my sanity and spread good feelings and fun to everyone.

CS: What do you listen to?

CS: What inspires you?

MJ: Honest people. And a good performance of any kind of music

CS: I heard that Ted Nugent hunts big game in his off-time; and Michael Jackson rides the ferris wheel in his back yard with five-year-old boys. What do you like to do when you when you’re not playing music?

CS: What’s in the future music of Mighty Joe?

MJ: If you can prop me up, I’ll play. I have four questions: where, when, how long, and how much?

What, When, Where, and How Much? The Ballad of Mighty Joe Longa