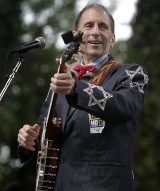 Bluegrass is not just about music. It is also about community, coming together to jam and share food and music with friends and family, and about interacting with fellow musicians. It’s about a passion and a sharing and, for many, about a way of life. If you want to see this culture in action visit a bluegrass festival.

Hundreds of thousands, if not millions, of people attend bluegrass festivals in the U.S. every year, ranging from the giant MerleFest Festival (named in honor of Doc Watson’s son Merle) with its multiple stages, to our local Summergrass Festival with its 4,000-6,000 attendees over a period of three days. Festivals are held in Europe, Canada, Australia, Japan, and elsewhere. People come to share, to pick, to listen, and to engage both with music and with friends in an authentic and personal way often hard to find in this modern world.

Festival attendees pick in the parking lots, camp, listen to the performances, attend workshops, and carry on this communal bluegrass tradition at these most American of events. Every once in a while a special individual comes along who profoundly affects what bluegrass festivals are all about. Sadly, we lost one of those rare individuals to leukemia recently: Warren Hellman.

Warren Hellman loved bluegrass and old time music more than anything (except maybe ride-and-tie horse competitions at which he was an expert) and was a very competent banjo player, having formed his own popular group The Wronglers. Warren Hellman was also a billionaire who was willing to put his money where his heart was — into old time and bluegrass music.

In true bluegrass spirit Warren decided he would start a free festival in San Francisco to present the kind of music he loved, for free, to anyone who wanted to attend. And, he was determined to treat and pay the performers in a top-notch way and to provide an outstanding experience for the attendees. So, he partnered up with Laurie Lewis and others to help with band selection and held his first free festival in 2001, featuring only bluegrass artists. In 2004 the scope of the music was widened and the “hardly” was added to the festival name, which from then on became known as the Hardly Strictly Bluegrass festival, held in Golden Gate Park in San Francisco every October.

Warren Hellman was, indeed, special. Diagnosed with leukemia, he delayed his treatments so that his band the Wronglers could appear at his festival and so that he could tour with one of his idols: Jimmie Dale Gilmore. He would joke from the stage that he had changed his name to “Luke Emia.” And, he reported only months before his death that one of his greatest moments was when an unknown fan came up to him at the South by Southwest event in Texas and said “aren’t you that banjo player guy?” rather than saying what he was used to hearing: “Aren’t you that billionaire guy?” To Warren there was no greater honor than to be recognized as “that banjo player guy.” Warren was also the guy who famously said: “Money is like manure. If you spread it around good things will grow. If you pile it up it just starts to stink.”

If you have ever been to Hardly Strictly Bluegrass, you know what a gem this man created. If you haven’t been yet, no panic. In typical Warren Hellman fashion he endowed the festival with funds to carry on for another 15 years after his death.
The festival committee has also announced that there will be a public celebration of Warren’s life at the newly renamed Hellman Hollow (previously known as Speedway Meadow, site of the Banjo Stage in Golden Gate Park, San Francisco) on Sunday, February 19. Of course, this will be a free event open to the public. “’The road goes on forever and the party never ends!’ save the date;Â  details will be coming soon” says the announcement.

Warren Hellman: rest in peace and thank you!