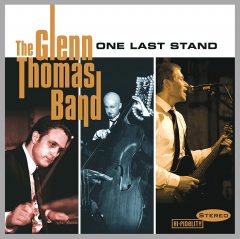 With its action-inspired populuxe watercolor portraits of the band members and the prominent labeling of HIGH-FIDELITY and STEREO that were de rigueur for the album covers of the early sixties, the CD cover of the Glenn Thomas Band’s One Last Stand signals that the recording finds its inspiration in the popular music of 50 years ago.

But before you start thinking that this band is going to sound like some backup unit for Steve and Edie or that they are going to offer up jazzed up covers from The Music Man, check out the back cover, the one that has the washed out colors of the seventies, showing Thomas in his faded denim and serious shades as he sits at the console of a Hammond organ. (And is there a Leslie cabinet off to the side?)

This image more aptly clues you into what the trio has in store for you on this disk. The sound of this unit harkens back to some of the hot music that swirled around the world some 40 years ago. Though it’s impossible to pin down the Glenn Thomas Band to an urban soul vibe, a southern rock groove, or other such pop staples of the seventies, this trio has as much soul as anything I’ve heard in recent years.

Phil Mitchell is on drums, and Sam Johnson plays bass. Thomas plays all the keyboards and guitar. Thomas also sings. Though there is some great playing on this disk, it is Thomas’ singing that stands as the strong point of this recording. His voice has a lot of heft and he sings in a direct and emotionally detached manner. As the songs go along Thomas’ voice penetrates, grabs your ears, and gets under your skin.

One of the reasons I enjoyed listening to this CD so much is the inventiveness and freshness of Thomas’ lyrics. Troubles in the here and now or troubles anticipated are the materials that Thomas works with in his lyrics. With “I know you’ve been married before, sixteen times and maybe more,” he opens the hypnotic love song “Sixteen Times.” The listener knows that this testament to Thomas’ love will end. And quite possibly end badly.

My favorite is “The Robbery Song.” Thomas contrasts the tender love he experienced earlier in the day to his current predicament, which is that of a bank robber in the aftermath of a heist that has gone horribly awry. Thomas’ direct and resigned delivery only seems to underscore the violence, chaos, death, and confusion of crime gone wrong. And I love the turn of the phrase “The getaway didn’t go my way.”

One Last Stand clocks in at 31:34, one minute and 34 seconds past the point that I start taking off points for being too short. I’d feel really bad to do that too, because each of the ten songs on this disk is a real gem. Thomas and his bandmates really deliver on One Last Stand.

FRED & THE KID: The Caged Bird