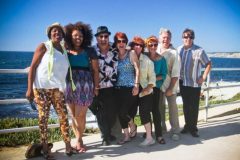 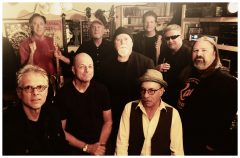 The Shenanigans. Photo by Cathryn Beeks.

Judy Berman Silbert’s voice is filled with enthusiasm. “This is going to be a wonderful cross pollination of art genres,” she says. The San Diego native is excited about the concert and first-ever fundraiser for ArtReach, the organization Silbert founded to bring art and art education into San Diego schools.

To be held on the 26th of this month, the musical event promises to be a real crowd pleaser, with Sue Palmer and her Motel Swing Orchestra and one of the best cover bands in southern California, the Shenanigans, performing. “We are honored to have the support of these musicians,” says Silbert. The concert will be held at the Music Box in Little Italy and will include a raffle for two pieces of art.

Silbert has spent her life as a public health professional, but art has always been an important component of her life. “My whole family was always involved in art,” she says. Her sister, Sandi Cottrell, is one of the owners of Art Walk, the local festival that for a few days turns city streets into one huge art gallery. In 2007, with school budget cuts tossing arts education out of the classroom window, Silbert was determined to ensure that grade schooners were taught about art and taught about making art. “Everyone agrees that children benefit from making art,” she says.

Free to schools, ArtReach provides ten days of art education per school year from a professional artist. After two years of the program, schools are required to provide some funding to keep the program going. Silbert started ArtReach with the local school in her north county neighborhood and, after ten years, ArtReach now reaches students in 11 schools. The new year sees the arts collaborative still growing, with new efforts on the organization’s internet presence and marketing.

Silbert attended Crawford High, the school that produced Hollis Gentry, Nathan East, and several other talented national and local musicians. “Everyone I knew played music,” Silbert says. Among her classmates was Jim Gunderson who had worked with Silbert on two previous fund raising efforts. When Gunderson suggested another fundraiser, this time benefitting ArtReach, the two old school chums turned to Jim’s brother John, who is a member of the Shenanigans.

The Shenanigans is a collection of veteran musicians (John Gunderson, Jim McInnes/Mark DeCerbo, Dave Good, Jack Pinney, Mark Bentley, and Tom Meksto) who have known each other and played with each other in different band configurations for a very long time. Their feel-good, upbeat music incorporates rock ‘n’ roll, blues, and R&B to get those toes tapping! Collectively, the Shenanigans know countless old off-the-wall rockers, and they work hard to make them cook in their own way. Consider a typical Shenanigans’ set list that includes such venerable material as “Uranium Rock,”Â  “Vasco,”Â  “One Bad Stud,” and “Kissin’ and a-Huggin’.” They write their own material as well.

If you’ve lived in San Diego for any length of time and aren’t familiar with Sue Palmer, you have been living under a very large rock. Know as the “Queen of Boogie Woogie,” Palmer is front and center with the Motel Swing Orchestra, her ensemble that has spent years delighting audiences and dancers with high-energy swing and soul. She has collaborated with San Diego’s Bayou Brothers as well as national stars such as Marcia Ball and Sonny Leyland. Under a mile-high beehive hairdo, Palmer spent years teaming up with the late Candye Kane, one of the best blues performers that San Diego had to offer. Palmer echoes Silbert’s enthusiasm as she says, “I’m looking forward to playing in a beautiful venue for a beautiful cause, with my entire Motel Swing Orchestra!”

The event will be held at the Music Box, which has been gaining popularity as one of San Diego’s finest concert venues. Boasting lounge areas, two outdoor patios, and one of the best sound systems in Southern California, the Music Box showcases international music stars, such as Robbie Krieger of the Doors and ukulele wonder Jake Shimabukuro as well as some of the best musical acts from San Diego and southern California.

The evening will include the raffling of two pieces of art, one of which is by Stephanie Clair. The New York native, who now makes her home here in San Diego, produces art that is interesting, whimsical, and by all means colorful. Kristen Cusato, Communications Manager for Sanford Burnham Prebys Medical Discovery Institute and former KUSI news anchor will emcee the event.

Those attending the event can choose from $25 general admission or $60 VIP reserved seating. VIP seating for a table of six is $300. All reserved seating includes one free drink per person and a bag filled with swag.

Silbert remains committed to bringing art into schools, particularly schools in underserved neighborhoods. “We share the belief that the arts of all kinds need to be an integral part of every child’s education, and should not be dependent on zip code or socioeconomics,” Silbert says. “And it’s wonderful when we, artists and musicians, can collaborate on such a wonderful effort.”