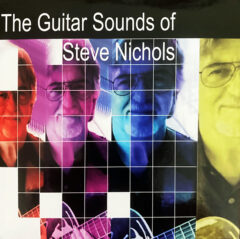 Steve Nichols is a commanding musician. The guitarist has performed with just about everybody. Among the top stars with whom he has shared the stage are jazz legend Barney Kessel, blues giant B.B. King, even the southern country-rock band Charlie Daniels. His local resume is equally impressive. Among others, Nichols has performed with Gypsy Groove, Bramble, the Surf Kings, and San Diego’s most fun band, The Bayou Brothers. No matter the genre, country, blues, rock, jazz, Cajun or zydeco, Nichols is the guy to call if you want great guitar work.
With this latest release, The Guitar Sounds of Steve Nichols, the 45-year music veteran keeps things in the jazz column with the standard “Our Day Will Come,” which opens the disk, Wes Montgomery’s cool and breezy “Road Song,” the Gypsy jazz numbers “Manior de mes Reves” and “Made For Wesley,” and Carlos Santana’s “Europa.” (As it is played on rock radio stations, lots of folks classify “Europa” as rock, but I’ll classify it as jazz, because the B part of the tune is based on “Autumn Leaves,” and you can’t get more jazz basic than that.)
For the rest of the recording Nichols gives us what I’m assuming are compositions of his own creation. With the occasional augmentation of electronica sounds and synthesizer instrumentation, I was reminded of some of the jazz-oriented pieces created by the krautrock guys from the big krautrock heyday in the seventies, the music that Helmut Hatler and Kraan would have put out. Not necessarily a trip down memory lane, but it did have me feeling nostalgic for that era.
Nichols brings in some of the best talent San Diego has to offer for this project. John Rekevics provides outstanding contributions on saxophone and flute. Other musicians on this recording are bassists Cecil McBee Jr. and Doug Booth, drummer Patrick Burke, and guitarist Guy Gonzales. I’d like to make special mention of one of San Diego’s rising stars, David Morales Boroff, who demonstrates with his contribution on the Django Reinhardt classic “Django’s Castle” why he is establishing himself as San Diego’s go-to guy for violin.
Nichols recorded this disk at his home studio. As anyone who has watched the videos from today’s rising stars, guitarist Josh Turner and singer Allison Young, you know that home recording no longer means poor mic placement or other substandard recording practices. Mastering was performed by Jim Soldi at Out House Studios.
Almost an hour in length, there is some fine music on this CD, Nichols should be proud of this musical offering, and it should please his many fans.

KEN LEHNIG: I Can Hear You Now!