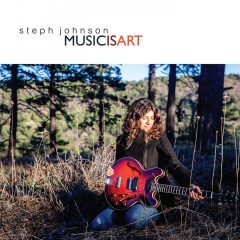 In 1971 the young Gil Scott-Heron released his second record album, Pieces of a Man. With this effort the poet pulled together elements of funk, soul, and jazz, then married this musical admixture to lyrics that were cogent, emotional, and insightful. The recording was largely overlooked by critics and much of the larger public. Other performers, however, were listening. What emerged from Scott-Heron’s influence over the next several years was an unnamed genre of lyrically rich, cool urban soul that flowered on supportive record labels and the newly reformatted urban FM stations.

With her latest CD, Music Is Art, local singer/songwriter Steph Johnson taps into this cool urban vibe with great success. First off, Johnson has a seductive, timbrous alto. She grooves with the band, but there is an added liveliness. It is almost as if her vocal dances on top of the backing instrumentation. We music reviewers are always tempted to pigeonhole performers, particularly singers. We think ourselves clever when we write such things as “sounds like Adele with a little Mel Torme thrown in.” But it is impossible to categorize Steph Johnson, and if there is anything that sells this recording it is her unique singing talent.

Even before I put this disk in the player, the cover photo of Johnson contentedly holding her guitar amid a pine forest signaled that this recording was going to be upbeat, a feel good experience. Indeed, the titles of Johnson’s first two tunes admonish us to “Be Light” and “Feel Better.” The theme of freedom and personal liberation emerges and reemerges throughout these tunes. Of the ten songs, Johnson wrote seven and collaborated with others for the remainder.

The San Diego Magazine songwriting winner and San Diego Music Award “Best Jazz Artist” nominee assembled some solid talent for this project. The rhythm section comprises Fernando Gomez on drums and bassist Rob Thorsen. From beginning to end Gomez is totally solid. With the soul licks of the electric guitar and the sounds of a B-3 organ, folks might expect an electric bass on these tunes, but Thorsen plays an upright, giving a softer sound to the bottom end. Music academic, producer, and multi-instrumentalist Kamau Kenyatta adds keyboards and some totally knock-out soprano saxophone. On a few tunes we are treated to the trumpet of San Diego-based performer and educator Curtis Taylor. The disk is rounded out by Ondrej Pivec on organ and Gregory “G Moe” Moore on guitar. All the recording was performed at Rarefied Recording, which is right here in North Park, and engineered and mastered by Chris Hobson, whose credits include the latest Lily Tomlin vehicle Grandma.

In the past ten years Johnson has amassed a considerable and deserved following and performs at some of San Diego’s top music venues, once again deservedly so. The addition of Music Is Art to her roster of compact disks is certain to please her many fans and gain her even more admirers.

SOMETIMES JULIE: Bright Side of the Line