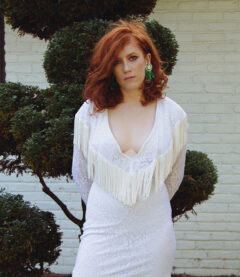 It was mid-morning, a Sunday in Ocean Beach. Sunlight shimmered through the large windows of O.B. People’s Organic Food Market. I think I was somewhere along the aisle with the fair trade coffee when I heard a voice, clear, and a bit soulful. I can’t remember the song, but it was a jazz song, an old standard, and the female singer was giving it her best: a little bit Billie Holiday, a little bit Nancy Wilson, a touch of Anita O’Day.
The voice continued as I passed by cruelty-free cosmetics. I think I remember hearing a take on an up-tempo blues while I lingered among the gluten-free offerings. The singer was great, and the band was really good, too. A nice jazz ballad was the accompaniment as I shopped through the rutabagas, kohlrabi, and kale of the locally grown organic produce.
As I crested the stairwell to the upper deck and deli of People’s, there was the singer, Stacy Antonel. I think I remember she was barefoot, wearing semi-faded blue jeans and a scooped blouse. Large glasses framed her face and kept her short, curly, red locks at bay, as they kept trying to fall across her large blue eyes.
I was finally catching up on what much of San Diego already knew. Stacy Antonel is a marvelous performer, a San Diego vocal powerhouse who had been singing jazz and popular tunes throughout San Diego for years. As Ginger Cowgirl, the moniker she has chosen for her country and Americana persona, she has performed at some of San Diego’s best country music venues.

One morning last month, Antonel shared a Zoom chat with me, I in San Diego, while she was in the midst of moving from one address in Nashville to another. My Zoom screen was filled with her large blue eyes and the signature redheaded locks. Antonel wore a comfy looking teal turtleneck sweater.
Antonel has recently recorded and will soon be releasing a new album, Always the Outsider, which she describes as fitting into the genre of Americana. “It does have a pedal steel guitar on it, but that’s pretty much the only thing about the album that makes it country,” she says. “There’s a lot more going on with it than what might be a typical country record.”

Stacy in the recording studio.

Indeed, the recording certainly has its roots in the honky-tonks of the 1950s and 1960s, with the sounds that harken back to Merle Haggard, Loretta Lynn, and Johnny Cash, but there are other influences, too, from Fairport Convention and Poco to Appalachian folk music.
Much of the material has, as the title suggests, an outsider-looking-in perspective. Antonel says, “For much of my life I’ve felt on the outside, trying to figure things out, like, ‘Why does she like him?’ ‘Why does that person hang out with that other person?’ Not to go too far back into childhood, but I was never a popular person. I was bookwormy, so I think that my approach to life was always just observing and trying to figure out what the rules were.”
The singing on the recording has an easy feel to it. Antonel sounds at home with the songs and the approach to the music. She has had voice training in the past five years, but other than performing in school musicals while she was growing up, she did not receive formal voice training. “I was always a singer, and I taught myself to sing,” she says. “My dad would hide my cassette tape to Annie, because I would walk around with it singing everywhere. I would also sit in my room when I was growing up and sing the same Jewel song over and over. Jazz is my favorite vocal style. And I love all those classic singers like Otis Redding, Solomon Burke, Sam Cooke, and Willie Nelson. Willie Nelson uses a lot of chromatic scales and I love that stuff. Oh, and I love Tori Amos, too.” 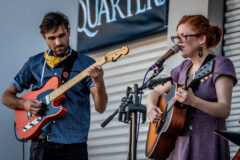 Lyrically, there are familiar themes of love and love lost etc. on the album, but there are also gems such as “Heartbroken Tomorrow, Catatonic Today.” And the whole sound and lyrics of  “Absent Captain” had me scratching my head, with a whole bunch of it reminding me of the hippie times in the sixties.
Antonel says that her songs can come from a great number of inspirations, and that she is always writing down song ideas whenever she hears a turn of a phrase that strikes her in a certain way. Any of her original songs could start in a number of ways. “I don’t think I’ve ever started with just lyrics, and very rarely do I just start with melody,” she says. “I never really set out to write about any specific subject matter, I just sit with the guitar or at the piano and just sort of stream of consciousness sing until something seems worth keeping melodically or lyrically.

“After I have some sort of basic structure, I turn on the editor/analytical side of my brain and work on the lyrics. I also do a lot of self-imposed song challenges, where I’ll write a song every day for a week or write a song in 20 minutes, no matter how terrible it is. That’s where several of the album tracks originated.”
The new album is a bit of a break for what Antonel has been doing for the last several years, much of which has been performing as Ginger Cowgirl, an act heavily influenced by classic country. “I’m not Ginger Cowgirl now. It took a long time for me to reflect on this, and it took a long time for me to come to this conclusion, but I don’t feel that that name reflects the kind of music I’m making now,” she says. “I don’t want to be Ginger Cowgirl forever. I just want to be me and whatever it’s going to be, it’s going to be weird. I think Americana is broad enough to contain whatever I’ll be doing for the next ten years. I don’t foresee going totally avant-garde or pop.” 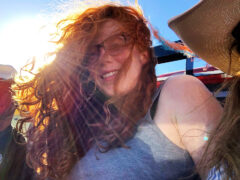 Antonel grew up in Ocean Beach and attended Point Loma High School. She studied classical piano from the time she was seven until she was 18. “But I never thought of music as a career path. That’s why I went to school for something else,” she says. That something else was anthropology. Antonel earned a degree in the human science at UC Berkeley. She then did, as she says, the “the normal graduate-get-a-job-settle-down-and-plan-for-your-retirement thing.”
On a whim, Antonel and a friend decided to go to Buenos Aires, Argentina for six months. In a fortunate turn for her, Argentinians love American country music. Although she was only barely familiar with June Carter Cash, she answered a Craigslist ad looking for someone who could sing like the member of country music royalty. 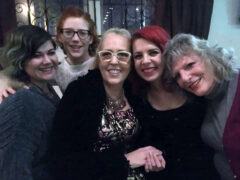 Antonel landed the job and wound up making television jingles that aired throughout Latin America. She later joined an electro-cumbia band called Camanchaca. What had originally been a six-month getaway turned into a year before she returned to the U.S., with making music being the new emphasis of her life.
Back in San Diego, Antonel sang mostly jazz and was the first contestant to win on the local Fox TV’s 3 minutes to Stardom, a sort of America’s Got Talent for America’s Finest City. With her $10,000 prize, she paid off some debts and wasted no time giving notice at her day job at the Reuben H. Fleet Science Center.
After a visit to a thrift store and the purchase of several classic country records, Antonel fell under the sway of Patsy Cline, Edie Arnold, and the pantheon of country greats. She put together Ginger Cowgirl in 2014 and hit the country music scene in San Diego. The band was geared toward keeping dancers dancing as well as showcasing Antonel’s original material in some shorter shows. Antonel has said that the things that set apart Ginger Cowgirl are the unique song selection and the vocal style that she has developed. “Country singers will say to me, ‘Oh, you’re a jazz singer.’  And jazz singers will say, ‘Oh, you’re a country singer.’ So that is my niche.”
She moved to Nashville in October of 2017 to pursue a career as a songwriter and recording artist. She recorded her debut EP at the historic RCA Studio C in what used to be Chet Atkins’ office. 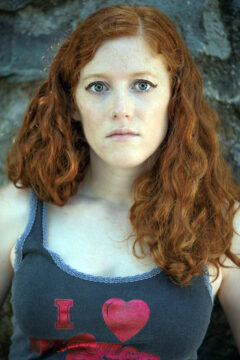 As far as the pandemic is concerned, where other artists and musicians have struggled or gone back to living in their parents’ basement, Antonel has made the time work for her. Financially, as the gigs dried up, she was able to take advantage of the changes that allowed freelance and self-employed workers to collect unemployment. She says, “In the time of the pandemic I had a relationship that spawned half the songs on this new record.”
For the near future, Antonel is having her CD release party here in San Diego sometime in June and is planning a tour that includes performances in Utah, Colorado, the Carolinas, and other states. She says that if she had her way, she would constantly tour. “But I have to take into consideration my guitar player’s schedule, and take into consideration that most people don’t want to endlessly tour for very little or no money,” she says. “I regret that I’m not a good enough guitar player to accompany myself. If I were, I wouldn’t even have a house. I’d put all my stuff in storage. I would be on the road 365, going everywhere.”
Stacy’s shows this month:
Feb. 2: Tio Lio’s, 7pm
Feb. 3: Nate’s Garden Grill, 6pm
Feb. 4: Spiro’s Greek Café, 5:30pm
Feb. 5: Grand Ole BBQ, 1pm, and Twin Oaks Valley Winery, 6pm

Honoring Female Contributions While Striving for a More Human-Centered World

CHRIS VITAS: The Man with the Golden Bow