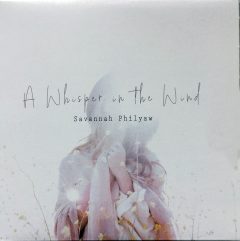 A Whisper in the Wind is the full-length debut by Savannah Philyaw, an ambitious ten-track collection of original pop songs. Philyaw wrote or cowrote all of the tracks, while enlisting some help on some compositions from talented local musicians; the studio crew includes producer/multiple instrumentalist Joel Piper, Jeff Berkley, Tolan Shaw, Rick Nash, Josh Hermseier, Jody Mulgrew, and Corrie Bunnel.

These are relationship songs, and while they might be called light weight, even the few breakup ballads lack any real bitterness; instead, the key throughout is catchiness—in abundance. The sound is a lushly produced palette that makes the most of Philyaw’s songs, mounting them in layered, floating sound montages that surround her often double-tracked voice with backing harmony vocals, tasteful acoustic guitar and pedal steel flourishes, violin here and there and big buildups that don’t sound overdone. The effect works, as the album has notched an SDMA nomination for Best Pop Album.

The set opens strong with “Go Alone,” which has a brisk beat with Philyaw telling the listener about being ready to enter a new phase, on her own to “wander with my shadow” and “trust the compass in my bones.” The song flows like honey on a bed of banjo and acoustic guitars, and sharp backing vocals anchor the choruses. “Running to You” pushes most of the same buttons, with added punch by a kick-drum pulse, as Philyaw and a backing chorus weave their vocals around one another. It is the highlight here, on an album with no real weak tracks.

The first of two duets with Shaw is “Call It Compromise,” a pop delight that runs through the traditional battle of the sexes commentary: “Love is not a movie as we look behind the scenes/ The highlight reel is nothing like the moments in between.” They both get that love is a sacrifice, and discover that the result is worth the effort. Another memorable winner is “Temporary,” and perhaps the most interesting track is “Scotland.” Philyaw sings this one about adventures on a trip to Edinburgh, encountering a love interest, with her yearning to go back and relight the fire.

“Somehow You Were There for Me” is another duet, and an upbeat, hopeful love song that follows the vibe of the rest of the record—this is an optimistic, positive set of music, and here the lovers acknowledge the other’s steadfast devotion and presence in times of need. The answer to this idyllic scene, “Too Damn Long,” is the breakup song of the program, as she relates the changes that will need to be made now that her lover has departed, and the wait for a return has been fruitless. “I guess it’s time to patch these holes upon the walls, and give way the hope my heart’s been holding.”

Savannah Philyaw’s A Whisper in the Wind is a very enjoyable pop collection, sure to gain her a bigger audience and a promising sign of things to come in the future.