January 2023
Vol. 22, No. 4
Ron Bocian: Euphoric About Brass by Frank KocherJune 2018
Back with a Bang! Java Joe's Reunion at San Diego Folk Heritage by J.T. MoringJune 2018
Book Review: The Philosophy of Modern Song by Bob Dylan by Ted BurkeJune 2018
Rick Nash: Bass Man in Demand by Wayne RikerJune 2018
If Music Be the Food of Love, Play On: Dually Noted Pairs Fine Food and Fine Music by Paul HomiczJune 2018
Mod Revivalists the Trebels to Reunite for 40th Anniversary Show by Jim TrageserJune 2018
Harold in the Land of Jazz by Bart MendozaJune 2018
Sephardic Dance and Music by Yale StromJune 2018
Loretta Lynn: A Special Tribute to the Queen of Honky Tonk by Terry Paul RolandJune 2018
Ben Grace Gilmore: It's All About Building Community by Sandé LollisJune 2018
Advertisements 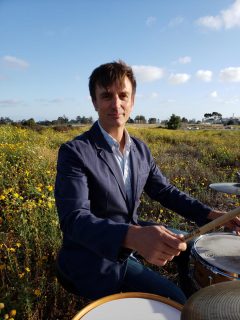 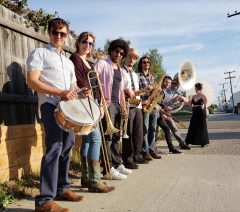 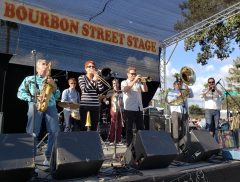 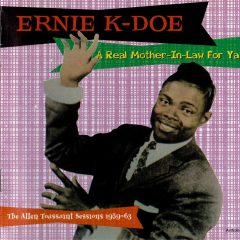 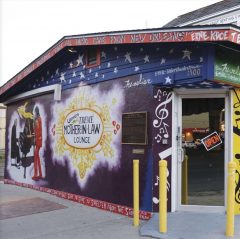 His tale is one of three cities, and several groups, but with one overriding theme: brass bands. In this age of guitars and keyboards and pedals that mimic orchestras, Ron Bocian is a drummer who knew he was destined to keep time early on learning polka beats in his Croatian neighborhood in Chicago at age five or six.

“Drumming was easy for me. I’ve long been addicted to the groove and the supportive nature of drumming.” Chicago in the late 1980s was a cauldron of blues, and soon enough, Bocian was haunting the clubs following his favorite performers.

“Junior Wells, Son Seals, Buddy Guy, Melvin Taylor, and Billy Branch were performers I would see time and time again. Jazz drumming was always interesting to me, from Kahil El’Zabar, to Paul Wertico, even Barrett Deems were performing nearly anytime you would like to hear them.”

Living above a bar where Buddy Miles hosted a weekly blues jam, he sat in and absorbed what he heard, while playing with art rock bands in a classic Polish Croatian ghetto in Chicago. Then came the icy winter of 1991.

“We experienced one of the coldest snot-freezing winters ever in Chicago. This was largely the catalyst for me to set sail to the warmer climate of New Orleans. I had spent my childhood listening to so much traditional jazz from my mom’s vinyl collection gifted from her WXRT DJ boyfriend in the early 60s. I still have these discs with the Promo stamp from WXRT.”

Resourceful Bocian landed in New Orleans just before Mardi Gras, lied his way into a waiter job on Bourbon Street, and began studying all the drummers on that block.

“The caliber of musicianship was ridiculous! There is really no conservatory that can instill the sense of groove and chops you would develop playing five to seven sets every night, six days a week…then church service on Sunday. I got some great opportunities to gig with classic R&B bands on Bourbon Street. They paid $7 per set–with tips, food, drink, and the amount of pure joy. It was a fine exchange for a young man at the time.”

After this apprenticeship, Bocian settled in with a band of New Orleans natives he calls his “conservatory,” Egg Yolk Jubilee, where the music was their own flavor of traditional jazz mixed with progressive rock.

“Alex lived just a few blocks from my house. I got the opportunity to hang with him, because he was a champion for a lot of the garage rock bands–that kind of grungy, bluesy sound; he would help groom the sound and produce. Alex really was always a champion for the underdog. I played with him five times, but he’d never tell you what songs we were going to perform. A lot of it was NOLA R&B, if you were part of that, you’d know what to play.

“He liked things just simple: ‘Diet Coke with lemon.’ I still listen to his music, Big Star, I will listen to those albums the rest of my life.”

His gigs with NOLA flamboyant fixture K-Doe were also memorable. “It was like playing with a living legend. He could electrify an audience, own a room, like instantly.

After nearly 17 years in the Crescent City and post-Katrina 2007 found Bocian in Leucadia. “For me, landing here is sort of like how I approached landing in New Orleans. I wanted to embrace the culture and sound, and the way music is produced. I landed in Elfin Forest originally, and I played in a surf band, kind of like in New Orleans I played in a traditional jazz band, that was the direction you feel you should check out. It started with Felipe (Benevides) and the Red Fox Tails. That band definitely was a launching pad for a lot.”

The Red Fox Tails started in 2010 with Benavides and Jay Reilly learning acoustic bass for the band. We are still going strong, playing four to six times a month and releasing an EP this month. The group writes its own material, guitar and reed featured instrumentals pulling from Latin, African, and New Orleans music.

When he got home, he went straight to Jazz 88’s website and emailed Drew Miller, whose program “2nd Line Parade” is still on the air. Armed with a stack of obscure NOLA CDs, Bocian got together with Miller, and told him he’d love to start a brass band out here. Miller liked the idea and connected Bocian with fellow NOLA refugee David Bandrowski, who hired him for a gig with his Zapf Dingbats.

“While we weren’t friends in New Orleans, we lived there at the same time and our paths crossed all the time. ‘Yeah, he lived across the street from me in New Orleans,’ Miller exclaimed “Did you know he lives here?’ ‘No way!’”

Miller knew lots of horn players and volunteered to play bass drum, and the three thus founded the Euphoria Brass Band. Bandrowski’s involvement ended when he returned to the Big Easy. With Euphoria, Bocian and Miller function as co-leaders, and have been fetching gigs and doing the strategic planning through seven years and four album releases. Their success has been documented by five consecutive San Diego Music Award nominations during the first five years since their inception.

“It’s full of old school San Diego players–Steve Ebner, April West, Wayne Rice, and JP Balmat. JP is the music director, he writes the originals and arranges the standards. I actually brought the Euphoria Brass Band to New Orleans this year and they joined the Krewe du Vieux parade, one of the biggest Mardi Gras parades. I finally brought the whole group, 30 people total. It was really great.” Balmat also plays reeds in the Red Fox Tails and is the Mission Bay High School band director.

Locally, the Euphoria band plays a heavy slate of gigs, including a Baja circuit and in the Bay area; they can also be heard locally at weddings, engagement parties, and New Orleans-style jazz funerals. “Sometimes I wonder how many more times do I want to play ‘When the Saints Go Marching In,’” or another song, and you’ve got to balance it with how you see the audience’s joy. It’s a reward that sometimes is more valuable than money or your ‘cheese allergy,’ you know what I mean?”

Bocian has been playing in a more intimate setting with the Chee Koo Trio, with bassist Doug Walker and pianist Sky Ladd. The music is also New Orleans-inspired, playing first Tuesdays for the past year and a half at Seven Grand in North Park.

“I always wanted to play in a piano trio, I actually took some piano lessons from Sky Ladd. A gig came up, and I said, ‘Hey man, would you like to play this piano trio gig?’ This place that has an acoustic piano, at Seven Grand, so we just started a piano trio off of that.” The group also adds local vocalist David Mosby, who sits in on vocals.

Late last year Bocian kicked off a new brass outfit, the eight-piece Crew D’Etat Brass Band.
“I’m really excited about my latest brass band. This one began as a marching band, the Rad(ical) Marching Band. We wanted to bring some positive celebratory music to the Equality Women’s March in early 2017. We were practicing on Mission Bay and just really enjoying the music. Sousaphonist and good friend Aaron Gragg and I were meeting on the bay and tucking into some drum and tuba grooves and it felt just right.

The new group has been very busy, playing festivals, clubs like the Rabbit Hole and Bar Pink and upscale gigs like the Pendry Hotel downtown and Harvard & Stone in LA, where they have recently backed roots artist Stephen El Rey.

“It’s brass jazz street funk and more R&B; we do Stevie Wonder tunes. It’s more of a stage band, we have several vocalists. I play a drum set, while I play primarily snare drum with the other brass bands.” Bocian is enthused about the work ethic and attitude of the young players, most of whom are about 24.

“I am so impressed with them, they have a whole new approach to music-everything is on Google drive, they really do their homework.”

Four local, working bands keep Bocian busy, but not enough to anchor him to just this town and these groups. He headed for New Orleans on April 30 to play drums in James Marler’s the Electric Arch. He had been the original drummer with the Tulane literature professor’s award-winning Rotary Downs band but was over committed.

“James Marler is a legendary Indie rock songwriter friend, he comes out here to surf with me all the time. He really made a mark with the Rotary Downs. They’re a 20-year-old band; some of the people in the band are busy with kids and whatnot, so he just started a new band, the Electric Arch, this year. I said, ‘I’m drumming for you in this one.’ He’s one of the best songwriters I know.” Bocian has been playing with the Arch a lot since the first of the year, and during Mardi Gras; plans are to play Jazz Fest gigs and continue this fall. The music is what Bocian calls “for lack of a better word, rock and roll” but with a New Orleans rag.

Bocian is the picture of a busy working musician; he moves comfortably among four local groups and other assignments in the Big Easy, the groups in which he appears have released seven albums (from Red Fox Tales and Euphoria Brass Band) since 2011. And most of the music is outside what can be called the mainstream.

“From what I know, and April West, who’s been playing in this area for 40 years, Euphoria was most likely the original brass band in this area. I love it, there is nothing like the tone from a brass instrument. The sousaphone especially-that low frequency, you can feel it.”

“As long as there are people appreciating and getting some joy out of what I’m doing, that’s all I really care about. Working with people, it’s just so satisfying.”