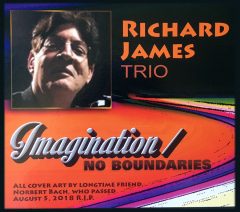 Imagination/No Boundaries is the new CD by the Richard James Trio, a collection of 11 jazz tunes by local keyboardist/bassist/vocalist James, with Russell Bizzett on drums and percussion, and Grant Clarkson on bass. James composed, arranged, and recorded all of the material and the set represents a broad palette of sound shadings, but the clear focus is on James’ considerable improvisational skills on piano. Also, another plus, the extensive artwork helps the listener understand the origin and development of each of the pieces.

“Round Table Bliz (KT8.3 Blues)” kicks things off, and the players dive right in as the swing beat propels the principals into a series of exchanges as their impressive technical virtuosity is evident from the first few beats. The recording is live in the studio and is like being in a club without the stray noise. As elsewhere, the group takes their time and follows the muse where it leads; the songs here average five and half minutes.

“Olivia’s Song” stands out as James plays bass, exploring melodies as the lead instrument over electric keyboard accompaniment. It is different and interesting. “NYC Hustle” employs recorded sounds of New York City traffic, trains, crowds, and other sounds in both channels, overlaid with a percussion track, electric keyboard touches, a bassline rumble, and dancing statements by James on piano that dart here and there. James pays his due to his classical roots with “Chopin Mazurka Op. 17 #4,” starting by himself, then having the others join in a third of the way through to show just how well this piece from the 1830s works as a jazz framework, especially when Clarkson takes flight on a bass solo.

“Oscar’s Revenge,” which is dedicated to Oscar Peterson, has a brisk pulse and bears Peterson’s signature flying-fingers flash, followed by a few bars of solo chops by each of the players in a satisfying bebop highlight. The only vocal is “Holy Name,” a journey completely out of the box that is essentially a devotional pop ballad. No arguing with the message of God being truth, in all His forms (Krishna, Yah-weh, Jesus, Allah), and James does a good job singing on a tune that sounds like something from another album.

Some of the compositions and best playing are buried deep in the program. “Circles” has a funk bass/drum hook that gives it a burst of energy, launching James into some inventive explorations as counterpoints. Perhaps the sleeper of the entire disc is the tenth track, “Blue Turquoise,” which has the most memorable hook. This one nails the listener with arpeggios as it follows its irresistible groove, first with James then Clarkson making statements. The final track is “Stretch,” featuring the best drums on the disc, with Bizzett laying down a busy latticework to be decorated by James with tasty hints of Bossa Nova.

Imagination/No Boundaries is aptly named, a delight by the Richard James Trio for lovers of jazz and keyboard playing,