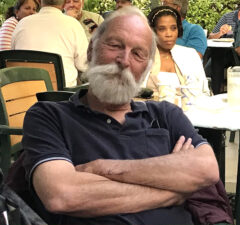 It is late October as I write this column… there are so many things on my mind it is difficult to focus. A couple of days ago, I played in front of an audience for the first time in two years. The occasion was a Celebration of Life Show for Michael Hart. Michael was the publisher of the Julian News and a strong supporter of music in San Diego, especially in the Julian area. I first met Michael when I was playing with Folding Mr. Lincoln. We were booked into the Wynola Pizza & Bistro, a venue that I hadn’t heard of. I would eventually play there about a dozen times spread across gigs with Folding Mr. Lincoln and the Mark Jackson Band. Every time I played there, Michael and his wife Michelle would be there to listen to the music, usually sitting near enough to the stage to maintain a steady between-song banter with the band. I came to appreciate the intimacy with the audience that venue provided and their genuine interest in the music, but also that they truly cared about the musicians as people. Conversations on breaks were often far-ranging, not limited to discussions of the music of the evening. When we were playing, Michael was often just sitting with his arms folded across his chest, eyes closed, quite lost in the music, and sometimes quietly singing along.
The Celebration of Life Show was a rousing success. The spirit of cooperation among the artists who played was extraordinary. Whenever someone needed to change their performance time or make some other adjustment, everyone was agreeable and took it in stride. There was a lot of green room jamming and last second collaboration that made the evening, and the performances, even richer for both the audience and the artists. While I was going over one of my songs with Dave Howard for my set, the folks from Trails and Rails joined in. It sounded so awesome I asked if I could swap my time slot with the group ahead of me so that Trails and Rails would still be on stage when I was going on and they could sit in with me. No problem. My thanks to Haywire for switching and to Trails and Rails for making me and Dave sound awesome! 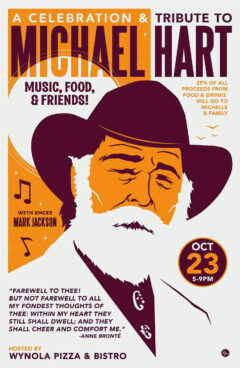 I also want to recognize Harry Horner and the staff at Wynola Pizza & Bistro for all their help in providing such an excellent environment for all the artists and for the performance venue. I can’t thank them enough for the green room, which provided us with a place to relax, to warm up, to jam with other artists, to talk and reminisce, all with the knowledge that it was a safe and secure place for us and our instruments. We even had our own restroom! That is a class act!
There are so many challenges to putting on and performing at these types of shows. It has often been described as “herding cats.” There are an almost infinite number of variables, any of which can sabotage even the most well-planned show. Our original concept for the sound system almost immediately proved to be unworkable for the room. Fortunately, we were able to pivot to a more versatile configuration. Every artist has a comfort zone where they perform at their best. It is almost a certainty that this sort of show isn’t going to be remotely close to that comfortable place and a little—or a lot—of adjustment will be required. I am so proud of everyone for adapting and still giving their best performances. Everyone seemed to build on the energy of the preceding act and set the stage for those that would follow. A gentle competition of sorts insured that the audience would experience an excellent show. As the evening progressed and the audience became louder, it was clear that using live mics for the guitars wasn’t enough. Of all acoustic instruments, guitars are the most notorious for being hard to amplify in a live environment. (I could do an entire column about this topic, but I’ll save that for another time…) In response, Given Harrison, who generously provided the sound system, provided a direct input (DI) for the guitarists to use. Very cool.
While the various artists who played this show define themselves using different terms for their genre—folk, bluegrass, country, old time, blues, or just Americana—it was abundantly clear that there was a common thread that ran through everything and everyone. All the unplanned collaboration was proof of that. There were cover songs interspersed with original music and nothing sounded out of place. Everyone knew everyone else—or at least knew of them—and many old friendships were renewed. I met musicians that I hadn’t seen in 30 years, yet we fell into conversations and music as though no time had passed at all. I wasn’t alone in that either. That was the norm rather than the exception and I’ll bet that we’ll be seeing some of those chance meetings turn into joint performances in the future.
Random thoughts: When you agree to play for an event such as this, be flexible. Everyone is in the same situation as you so be patient. Cooperation will get you further than complaining. Offer to help if you can. Keep track of your time and your equipment, don’t expect that someone else is doing that for you. Have your music prepared and well-rehearsed, you will be lucky to get a sound check and by the time you go on, the sound will have changed anyway. Knowing your part is essential when you can’t hear yourself or others the way you are used to. Keep things simple. Intricate music and vocals usually don’t translate well. Don’t exceed your allotted time. Choose shorter songs that get to the point—you’ll give a better performance. Don’t “try out” new material. Stick to what you are good at and songs that you are known for. Remember why you are there, it’s probably not about you.
Finally, I feel very blessed that I was able to play for this event. Michael Hart truly enjoyed local music and musicians, and he had a way of making you feel like he was there specifically to hear you play. That was a sentiment I heard many times from many artists during the evening’s performances. And… my personal thanks to Mark C. Jackson, Dave Howard, and my daughter Chesalie for everything they do. You rock my world! —Charlie
Need to know? Just ask… Charlie (ask.charlie@hotmail.com)