January 2023
Vol. 22, No. 4
Raul Sandelin’s Rock Doc Movie Journey by Frank KocherJanuary 2017
Back with a Bang! Java Joe's Reunion at San Diego Folk Heritage by J.T. MoringJanuary 2017
Book Review: The Philosophy of Modern Song by Bob Dylan by Ted BurkeJanuary 2017
Rick Nash: Bass Man in Demand by Wayne RikerJanuary 2017
If Music Be the Food of Love, Play On: Dually Noted Pairs Fine Food and Fine Music by Paul HomiczJanuary 2017
Mod Revivalists the Trebels to Reunite for 40th Anniversary Show by Jim TrageserJanuary 2017
Harold in the Land of Jazz by Bart MendozaJanuary 2017
Sephardic Dance and Music by Yale StromJanuary 2017
Loretta Lynn: A Special Tribute to the Queen of Honky Tonk by Terry Paul RolandJanuary 2017
Ben Grace Gilmore: It's All About Building Community by Sandé LollisJanuary 2017
Advertisements 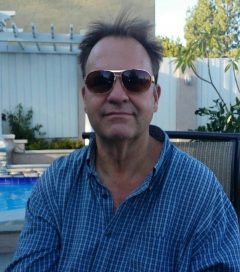 In 1950, there were 5,600 people in El Cajon, which means “the box” in Spanish. By 1970, there were 52,273 and one of them was this author. Another was Raul Sandelin. The journalist, educator, and documentary film director and producer feels a special connection to both the city in the valley, rock music–and the way the two are uniquely connected.

“You used the term ‘working class suburb’ to describe El Cajon,” said Sandelin. “That’s the type of town that gave rise to rock ‘n’ roll across the country. Asbury Park; Aberdeen, Washington; Tempe, Arizona; the suburbs of Detroit. There’s a reason why the Rock ‘n’ Roll Hall of Fame is in Cleveland.”

Sandelin knows what he is talking about. Attending El Cajon’s Grossmont High in the late ’70s, he was fascinated by the tales of local iconic music figures from the valley during the fruitful period starting with the previous decade. Afterward, he did freelance writing (including frequent contributions to the San Diego Troubadour) and continued his education at UCSD. However, it was after he began teaching writing and cultural theory at Grossmont College that he decided to direct a full-length documentary, A Box Full of Rocks, The El Cajon Years of Lester Bangs (2013). The film focused on the childhood and early writing career of the gonzo music writer and El Cajon native Lester Bangs.

“Someone–not me–coined the term Sunshine Noir to explain the irony of Southern California. On one hand, you have the sun, the tourism, Disneyland, and Hollywood. On the other, you have these hard-scrabble communities, the workers who make the hotels and tourist destinations run on time. You also have the underbelly of fun, sun, and tourism: the illicit side of pleasure.”

Sandelin could see that the valley’s musical hotbed for gritty roots music likely grew from the seeds sewn by touring country acts at the Bostonia Ballroom after World War II. One of the largest dance halls in the West, it hosted most of the top country stars during the 1950s, as well as local country musical stars of the era, including Smokey Rogers and “Cactus” Soldi, owner of Valley Music on Main Street in El Cajon and the fiddle player in Rogers’ Western Caravan band. The generation that followed these cats played rockabilly and rock, hung out at Valley Music, and bought their instruments and strings from Soldi.

By the mid-’60s, the British Invasion and blues had ushered in a new musical storm, and El Cajon had some new heroes… and a new hot spot.

“There were at least three record stores in El Cajon in the ’60s. The rock bands playing at the Hi Ho Club were playing music by Love, the Yardbirds, the Kinks, and the early bands that were signaling the coming 1960s cultural revolution.” It was the perfect environment for Bangs, a music junkie, record collector, and writing wunderkind.

“You had the traditional music of the area, the folk music and country-western that inhabited the Bostonia Ballroom, which migrated West with the dust bowl Okies, a group that included Lester’s family. Then, you had the post-war teenage Baby Boomers. This generation’s tastes were totally modern.” Sandelin saw a “big clash of cultures” and irony resulting from the collision of traditional music and the upcoming generation.

“Nothing quite makes sense in Southern California, which is both weird and wonderful. I think this explains why so many “odd” artists came out of El Cajon and greater San Diego: Iron Butterfly, Tom Waits, the early Eagles, Lester Bangs; later the Beat Farmers, Cameron Crowe, and Diamanda Galas. These are all hybrids, first of their kind.”

A Box Full of Rocks centers on the misfit Bangs, who sought out like minds among the followers of the beat movement, with a thirst for music that evolved from bebop jazz to the blues and rock that became the theme music of social change. Recalled by friends and musicians from the time, the iconic writer’s years at El Cajon High display the confusing energy of the year 1967, brought to the screen in excerpts from Bangs’ writings. Other touches, including music by some of the musicians interviewed–including Raney and Butler–make the film a riveting experience. Sandelin’s own band, the Flying Sandolinis, provides music, as on his other films’ soundtracks.

“This may sound crazy, but documentary filmmaking for me goes back to Bruce Brown’s On Any Sunday, the doc about motorcycle racing. It’s funny! The kinetics and choreography that go into something like a motorcycle race are similar to the way that a rock band fills up a stage. There is a certain horizontal and vertical predictability that is continuously crosscut with diagonal surprises.”

Sandelin is a student of the art and craft of film, citing as influences such major film directors as Martin Scorsese and Richard Lester, as well as David Fincher and Spike Jonze. One of his favorite documentaries is Dogtown and Z-Boys, by Stacy Peralta. He worked for years before getting behind the camera himself, but he had plenty of creative experience.

“I got into filmmaking after doing a lot of different art forms: I was a musician, a Beat poet, a music critic, an ad man in a gray flannel suit. I’d shot TV commercials, wrote a lot of radio back in the ’90s. So, I didn’t go to film school, but I had a pretty good idea how to put a film together.”

He discovered that directing documentaries involves much more than meets the eye, an expensive and time-consuming process that requires the talent and efforts of many. Finished indie films cost between $1,000 and $3,000 per minute and can take over two years to complete. But he had a vision.

“I’ve really found inspiration from two very obvious sources: Cameron Crowe and Penelope Spheeris. Cameron, of course, is a San Diegan, like Lester Bangs, and a few of us. I’d like to think that we’re all part of the same tradition. In addition, Cameron is simply a great storyteller who captures our generation-the ’70s Boomers spectacularly. Penelope did what I’m trying to do, but did it 30 years ago. Her three-part Decline of Western Civilization set the mark for what I wanted to capture as a director: larger than life personalities let loose upon the public. That’s why we make films, to give movie-goers a brief glimpse of humans at their most emotional, vulnerable, boisterous, and heroic.”

For his next project, Sandelin continued Bangs’ story and expanded it. Narrated by Gabriel Wisdom, Ticket to Write: The Golden Years of Rock Journalism (2016) explores all of the early rock music magazines: Crawdaddy, Mojo Navigator, Rolling Stone, Creem, Hit Parader and interviews a Who’s Who of early rock music journalists and critics. On screen, recalling crazy stories and famous rumors, are Ben Fong-Torres, Richard Meltzer, and 25 other music journalists who were there at the beginning. It is great stuff, full of humor and interesting details. And it took the time and effort of many.

“Art, in most cases, is an individual process, or if a group is involved, like a rock band. tribal at most. The presentation can take place “as soon as the paint dries.” With filmmaking, all of those expectations are thrown out the window. What is measured in days, weeks, maybe months by the painter, poets, singer-songwriter is measured in years by the filmmaker.

“Throttle the Sun asks the questions: Why do we revere rock stars the way we do? Why do we embody them with super-hero, godlike qualities? Why is calling someone a ‘rock star,’ even outside its music context, the highest form of flattery?” Though rock stars largely bit the dust with the advent of grunge and rap in the ’90s, Sandelin points out the non-musical implication of the term.

“Now, we call people who excel in their given field ‘rock stars.’”

His film is an informative and often amusing look at many artists who are and were primarily associated with the metal and prog rock scene in Los Angeles, and have survived to tell about it. For every tale of decadence and debauchery, there are matching ones of boredom and endless hours spent on tour buses.

“The ’70s saw the rise of stadium and arena rock. And the rock star was a figure who learned to perform in front of thousands of people. The ’80s saw the rise of MTV, and now the rock star performed for millions! However, the MTV video was not a live performance. There was new emphasis on capturing godlike perfection. Hollywood sound stages, stylists, publicists, movie cameras.” And sex and drugs.

“The excess of the rock star–the crashed cars, misogyny, trashed hotel rooms, food fights, antics, and stunts–lost favor as the American Dream waned and Gen Xers–and now millennials–sought a simpler aesthetic. Now, there was an immediate connection with artist and audience. The godlike status of the Rock Star lost its luster from the early ’90s onward.”

The musicians he interviews in Throttle the Sun almost all say that they don’t consider themselves rock stars, but in the prime of Arena Rock they were-and now they are just a bit older. Included are Alan Parsons, Don Barnes of 38 Special, Vivian Campbell of Def Leppard, Vinny Appice, and many other musicians, including bands like Black Sabbath, Dio, and the Romantics. Super groupie Pamela Des Barres and music journalists offer their take on the rock star phenomenon.

The movie, produced by Edward Turner of Road Ahead Productions and distributed by TV4 Entertainment, is set for release in February. On the horizon, Sandelin and his team plan a project with Des Barres.

“We also have projects about Frank Capra, pioneer scientist Candace Pert, and the APP-fueled sexual revolution now being enjoyed by millennials! And when I say ‘we,’ I want to acknowledge our cinematographer/editor Tony Butler, musical editor Jack Butler, film designer Len Torres, web designer David Turner, new biz guy Rob Houghton, and executive producer Ed Turner.” He’s busy promoting a tandem packaging of his first two films, and efforts are underway to get PBS outlets to air Ticket to Write (it is now on Amazon Prime and Amazon UK.)

Raul Sandelin’s first movie is dedicated “To all the Rock ‘n’ Roll kids of El Cajon.” He can clearly include himself among them.

Promo clips from Throttle the Sun.

Ticket to Write on Amazon Prime.