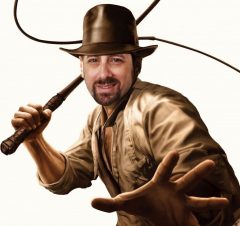 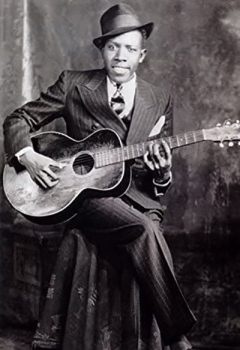 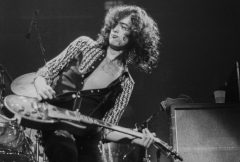 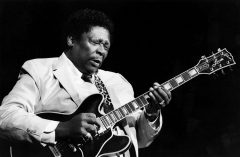 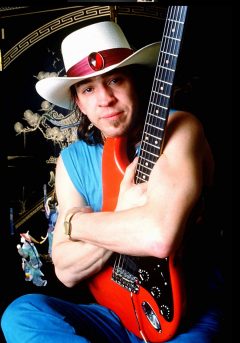 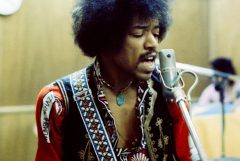 Of course, there were opera arias and concertos before then, but the 70-year period from roughly 1920 to 1990 was the golden age of the solo. From blues and jazz to pop and rock, spotlighting instrumental melodies both written and improvised was de rigueur. It took a while for the tradition to develop on the guitar, but through pioneers like Robert Johnson, Django Reinhardt, and Les Paul it began to proliferate like a Santa Ana wildfire. Wes Montgomery did his thing in the jazz world while B.B. King, Chuck Berry, and Chet Atkins made contributions in blues, pop, and country.The British blues explosion of the 1960s shoved the guitar––and the guitar solo––into the limelight; you couldn’t turn a corner without hearing a blue-eyed, Delta-obsessed group with an axe-slinging acolyte kicking out Buddy Guy and John Lee Hooker licks at unprecedentedly prodigious volumes. Players like Jimmy Page, Jeff Beck, Eric Clapton, Jimi Hendrix, Tony Iommi, Ritchie Blackmore, Jerry Garcia, Steve Howe, Tom Scholz, Mark Knopfler, and later newcomers like Eddie Van Halen and all his ’80s hair-metal imitators, Alex Lifeson, Stevie Ray Vaughan, Jeff Healey, Eric Johnson, Yngwie Malmsteen, Steve Vai, Joe Satriani, and so many more, elevated the guitar solo to a widely accepted and appreciated art form.

Then, very abruptly in the late ’80s, early ’90s, the guitar solo fell utterly out of favor. Just like punk had managed a decade before only more acutely pervasive, soloing became passé, the abhorrent manifestation of a self-absorbed, out-of-touch, vainglorious generation of dinosaur geezers masturbating in public. Kurt Cobain single handedly forced a whole cadre of hair-metal gunslingers and their makeup cases into early retirement with the release of 1991’s Nevermind, ushering in an era where guitar solos are met by wary, even leery ears. Public displays of six-string virtuosity have been stigmatized for successive generations and have yet to recover.

It’s a shame, because a well-placed, well-written or improvised solo on the guitar (or ANY instrument for that matter) can take a track to new heights. Any song worth its salt is like a theme park with several attractions/points of interest, a solo being one of many fantastic possibilities. It can give the listener a break from the singer and introduce a different voice for 30 seconds, head off the beaten path and into uncharted territory. It can offer the lead guitarist opportunities to innovate and express their own creative vision.

A great guitar solo is like a gymnastics routine. The player mounts the metaphorical apparatus with reserved flare and settles into an exposition groove, attempting to be memorable but not overbearing. They increase the tension as they proceed, unveiling their clutch maneuvers in progressive escalation, making sure to set up the spectacular dismount that passes the baton back to the singer without making it too hot for said singer to hold. It’s a tricky maneuver, but when the guitarist sticks the landing, it’s sublime.

What would “Stairway to Heaven” be without Jimmy Page’s blues aria paving the way for Robert Plant’s climactic verse? Or Jimi Hendrix’s cover of Bob Dylan’s “All Along the Watchtower” (arguably the definitive version of the song) without the intra-verse––and end-of-song––noodling? Take David Gilmour’s cathartic Stratocaster wail out of “Comfortably Numb” and the track just twiddles its bummer thumbs.

Check out The Knack’s Burton Averre on “My Sharona” or The Cars’ Elliot Easton on “My Best Friend’s Girl”; both of them were black-belt ninjas at blending chops and earworms into something indispensable to the rest of the song. Can you imagine anything that Queen’s Brian May played not being on “Bohemian Rhapsody,” “Somebody to Love,” or “Killer Queen?” What would a Roth-era Van Halen song be without one of Eddie’s miracle solos that somehow manage to be both melodic and wildly innovative all at once? It’s hard to fathom “Purple Haze” or “Manic Depression” without Hendrix’s napalm wailings. Prince’s “Purple Rain” and “Let’s Go Crazy” wouldn’t have quite gotten there without that odd-looking guitar tearing it up (Prince––not to mention Hendrix––is on a short list of singers who can also shred instrumentally, thereby monopolizing all the lead time). In the cases of the Allman Brothers and the Eagles, two was better than one, with harmonizing leads on classics like “Ramblin’ Man” and “Hotel California” respectively. And listen to the camouflaged Rivers Cuomo of Weezer sneaking in all those great lead and filler licks deep in the mist of the Nirvana-dominated grunge jungle (even Kurt Cobain couldn’t resist taking a few rudimentary yet highly melodic solo turns). These are the hallowed names of but a few masters of the form.

Who knows if the guitar solo will ever come back into full vogue. Lifelong practitioners will continue to clandestinely hone the craft and be persistent in their efforts to rescue it from both deserved and undue ignominy by tastefully including solos in their compositions where applicable, and generally continuing to make it a part of their musical and pedagogical paradigm.