September 2022
Vol. 21, No. 12
Performers and Artists Contribute to the Audubon Society’s Birdsong Project by Paul HomiczSeptember, 2022
Songbirds Take Flight by Charlene PulsonettiSeptember, 2022
Finding the Balance Between Science and Music: An Interview with Dr. Hima Joshi by Catherine BarnesSeptember, 2022
Jazz 88's Joe Kocherhans Bids Farewell to a Long and Illustrious Career by Wayne RikerSeptember, 2022
Tiki Oasis Celebrates 20 Years of Exotica Mayhem and Fun  by Andy RasmussenSeptember, 2022
The Lady Doctors Will See You Now by Laura PrebleSeptember, 2022
Happy Birthday, Jeannie! Jeannie Cheatham Celebrates her 95th Birthday this Month by Jim TrageserSeptember, 2022
Zach Caplinger: A Gifted Musician in his Own Right by Dwight WordenSeptember, 2022
The Return of IPO San Diego: After a Five-Year Local Hiatus, David Bash’s Unique Music Festival Makes a Much-Anticipated Return by Scott SamuelsSeptember, 2022
This Saw Is Not a Tool by Derek ShawSeptember, 2022
Advertisements 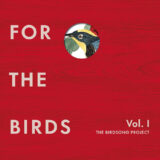 A roster of talent—more than 220 musicians, writers, actors, poets, and visual artists—has joined the National Audubon Society to create “For the Birds: The Birdsong Project.” Taking inspiration from birds and the natural world, these individuals have created a lodestone of art and music, including more than 70 poems and 174 musical compositions. All proceeds from the project go to benefit the Audubon Society.

During the early days of the Covid-19 lockdown, at his home in New York city, Grammy Award-winning music supervisor Randall Poster developed a greater appreciation for the birds and their songs outside his window. Poster contacted musicians and other artists he knew, as well as the Audubon Society, to discuss his inspiration and create this project.

A long-time collaborator with filmmaker Wes Anderson, Poster has worked on soundtracks for the movies Skyfall, The Wolf of Wall Street, and others. Work on the project was overseen by Rebecca Reagan.

“We’re going to engage generations of people in the most joyful, gracious way possible, through birdsong,” says Poster. “It’s key that we bring awareness to this cause by enlisting the biggest names in music and entertainment, and I am so grateful to be partnering with the National Audubon Society to do so. Partnership is the key to protecting and conserving the natural world we all love and share.”

Organized in 1905, the National Audubon Society has worked for the conservation of birds and their habitats and is one of the oldest organizations that does so. From its work in the passage of the Migratory Bird Treaty Act of 1918, from the creation of hundreds of wildlife refuges to the restriction of DDT, it is almost impossible to summarize everything that this organization has achieved.

As of this writing, the first volume of music and poetry from the Birdsong Project is available to stream or purchase on Spotify, Apple Music, and a number of music platforms. Additional volumes will be released monthly through September. August’s volume features artists such as Nick Cave, Beck, singer-songwriter Natalie Bergman, and poet and novelist Ray Young Bear.

If you’re one of those people who has rediscovered the joy of real records—the vinyl ones—there will be a commemorative boxed set of The Birdsong Project coming out on vinyl at the end of the year, close to Christmas time (hint hint). You can preorder it now at this link.

Folks can subscribe to the project’s YouTube channel. Updates are also available on social media and email. Live events in support of the project are being planned throughout the country. The Brooklyn Botanic Garden will have an entire For the Birds program series this summer.

Musicians and the Environment
Composers, musicians, and other creative individuals have found inspiration in the natural world for hundreds of years. The bird calls that Beethoven wove into his sixth symphony reveal the inspiration that the great composer found in nature. The power of nature can be heard in Igor Stravinsky’s Rite of Spring; Ferdé Groffe expressed majesty, awe, and even humor in his Grand Canyon Suite; and Aaron Copeland drew on folk songs for his score to the pastorale ballet Appalachian Spring.

Throughout my childhood, I remember environmental themes in the songs I heard on the radio. With his classic “Paradise,” John Prine encapsulated the sadness and estrangement I felt as I witnessed the waste and environmental destruction of coal mining in West Virginia. Our school bus crossed Simpson Creek, whose coal-polluted necrosis was portrayed by Maif Nutter in his hit “Simpson Creek Won’t Never Run Clean Again.” Of course, the environmentally themed tune that most comes to mind for me, as well as most folks, is “Big Yellow Taxi” by Joni Mitchell. Mitchell’s take is sardonic and whimsical as she tells us that “They took all the trees and put them in a tree museum.”

More recently, musicians have focused on climate change. Paul McCartney, who already established a lot of climate change street cred with his promotion of Meatless Monday, delivers a prodding indictment of those in power, and a ray of hope, with “Despite Repeated Warnings.” Donald Glover’s Childish Gambino uses a seventies souls style to express a personal experience of climate change with “Feels Like Summer.”

To be fair, musicians have received—and sometimes deserved—criticism over their abuse of the environment. Using their stages and songs to lecture on the climate crisis while they emit tons of CO2 carting around massive amounts of musical equipment and stage gear has been rightly pointed out as hypocritical. And much of what amounts to musicians taking action on climate change just boils down to a whole bunch of talk.

In a hopeful turn, in 2019 Fay Milton, a professional photographer and drummer for the Savages, launched Music Declares Emergency, a campaign and resource for professional musicians, particularly the ones who tour and put on big shows, with lots of strategies for artists and the music industry to lessen their effects on the environment. And in perhaps the boldest environmental move, Coldplay announced early in 2020 that the band would not tour unless it can be, as frontman Chris Martin says, not only sustainable but even beneficial to the planet.

Reprinted with permission from The Green Dispatch.

Finding the Balance Between Science and Music: An Interview with Dr. Hima Joshi