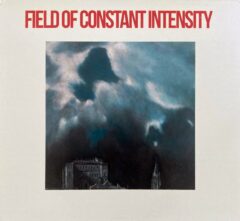 We’ve all been advised to never judge a book by its cover. For that matter, you can extend that dictum to include titles as well, (although I have to admit that I picked up The Unbearable Lightness of Being from the bookstore for that very reason).
So, I have to admit that when I received the package of CDs in the mail I was most intrigued by the CD cover to Field of Constant Intensity, so much so that I made sure it was the first disk that I shoved into the disk player.
Composed and performed by Paul Durso and Sun Circles, Field of Constant Intensity offers four tonal explorations that eschew traditional melody and harmony. Dreamily, the music slowly evolves through changes in tones and layers of tones, all of which are electronically produced or electronically processed.
The emotional content ranges from foreboding and mystery to joy and wonder. The disk culminates with the composition “Rainbow Body,” in which we finally hear the sound of a human voice, a dispassionate and not fully intelligible voice that is accompanied by a tattoo, the first rhythm that we hear as well. The effect is not necessarily reassuring, as the electronic sounds persist.
This is not meant for folks who need a catchy melody; Field of Constant Intensity might remind some of Tangerine Dream concerts from way back when. If you want to understand what grandpa is talking about when he waxes about music from the seventies, you might want to check out this disk.