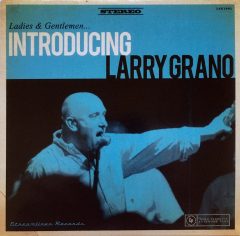 Many local roots music fans will be familiar with Larry Grano, from his decades of playing in many local pop, rock, and jazz groups. These that have included Rockola, the Eve Selis Band, Private Domain, Back to the Garden, Big Time Operator, and several others, as well as numerous studio credits on local and regional artists’ releases. He has had success for 35 years as both a drummer and singer, and his debut EP is Introducing Larry Grano.

This four-track sampler features Grano on vocals and drums, and the members of Back to the Garden on their instruments—Marc Intravaia and Jim Soldi on guitars, Sharon Whyte on keyboards, and Rick Nash on vocals. Also heard are backing vocals by Cathie Hyatt, Intravaia, and Whyte; horns by John Rekevics; and harp by T J Klay. Recorded at Soldi’s Ramona Outhouse Studios, it has a wonderfully old school, soulful vibe throughout that Grano’s voice seems born for, and manages in a few short songs to push plenty of funk, rock, and R&B buttons.

“Come on Over” kicks off the set with a great start. Written by Richard Wiley and driven by killer horn charts, Grano’s soulful vocal, boosted by great backing singing, transforms it into a moment that recalls ages past—when the best singles on the radio had the catchy punch that made hit machines out of the Rascals, Steve Winwood, and Hall and Oates. Things never slow down, as next up is “Eyesight to the Blind,” and the Sonny Boy Williamson blues standard has a stutter-step/funk drum riff, as the band lets Grano tear into it before taking turns shredding on their axes and keys impressively.

The boogie gets served by “In Control,” a tune by Marc and Paula Intravaia that is a guitar/harp/keys tour de force, and Grano knows just how to handle the lyrics, “Like my coffee spiked with whiskey and cream/ Got now eggs to fry, just a scrambled dream/ My good gal’s gone I couldn’t stand the scream/ I won’t shout out, might lose control.” It is a fiery highlight in a set of strong tracks.

The set wraps with a special cover of “Crazy Love,” which actually does justice to Van Morrison’s immortal original. The lovely arrangement includes perfect backing vocal choruses surrounding Grano’s reverent, spot-on rendition of Van’s classic, blue-eyed soul lyrics. Yeah, it sounds just like the record, a record that might just be one of the best ever recorded, and the perfect finale for a set like this.

Introducing Larry Grano is entirely enjoyable, limited only by leaving the listener wanting even more. But sometimes, it is enough just to savor the quality moments when they present themselves.