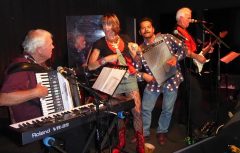 This year marks the second anniversary of OB Mardi Gras at Winston’s in Ocean Beach. This year OB Mardi Gras producers Paul Bolton and Ric Lee have assembled an eclectic mix of bands that are guaranteed crowd pleasers. Starting the show off will be a NOLA-themed second line march up Newport Ave (on the sidewalk) at 3:30pm. Paul and Ric promise their event will embody the spirit, sights, sounds, and scents of New Orleans.

With the addition of the Ass Pocket Whiskey Fellas, local OB favorites Band of Gringos, plus Cajun/Zydeco favorites the Bayou Brothers, this year’s event has all the gumbo ingredients to fire up the crowd.
Paul Bolton and Ric Lee are both San Diego natives and have a rich history in Ocean Beach. Paul grew up in Ocean Beach and owned/founded The Electric Chair in 1984 and the Ocean Beach Playhouse in 2011. Ric Lee lived in Ocean Beach during much of his youth and played drums in the Blonde Bruce Band, later founding San Diego’s favorite Cajun/Zydeco band, the Bayou Brothers band in 1995.
As far as the scents of New Orleans… complimentary red beans and rice will be served (while supplies last) and Winston’s will be serving hurricane drink specials as well. To add to the Bourbon Street vibe, go-go dancers will be throwing out Mardi Gras beads to the crowd during the evening as well. Laissez les bon temps rouler!!!

Anthony Smith: For Love of the Vibraphone