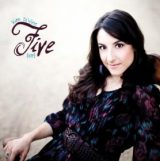 In 2009, Kim DiVine released Square One, a full-length disc by the former San Diego singer/songwriter, which showed a good musical range, from light folk-pop to full-band muscular rockers. Since then, DiVine has thrived, placing well in songwriting competitions, becoming the voice of a Jell-O advertising campaign, and putting songs on TV shows.

She is back with an EP, Five, that features the same kind of personal love songs as her last album: upbeat pop expressions of ideal romance. The five originals are sung in her interesting, high voice, mixed up front and hot, with a variety of backup arrangements that yield mixed results.

“Perfect Kind of Love” opens, an obvious single that features a repeated “love-love-love-love” backing vocals in the chorus, which listeners will either love or hate; no attempt at gravitas here, it’s almost all frosting with little cake. DiVine adds harmonies to “The Best Thing,” and scores with a slow, mellow sleeper that conveys her fear of losing a lover with whom she has completely melded her soul.

“Yours to Keep” starts quietly and, unlike some of the tracks, gradually builds momentum as layers of keys, backing vocals and strings join in. The mid-tempo rock ballad “Just the Same” is a highlight that gives DiVine’s first message about a love betrayal some power to back it up. Along with “Yours,” this tune shows that DiVine sometimes does better when singing atop some musical “bottom.”

Five has some moments of lively pop, and fans of the genre will recognize Kim DiVine’s gift for the genre.