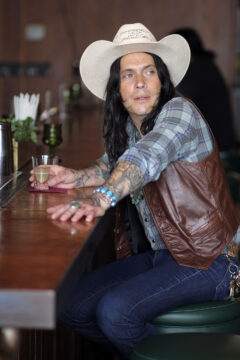 The ghost of Townes Van Zandt pursues this San Diego singer-songwriter from a childhood immersed in music and travel, to hard-core punk, power-punk, noir, alt country-rock, and Americana-roots music.

The troubadour sits in a backyard garden a few miles from the Mexican border in Southern California, safe from the storms of his storied past as he sings out to a coyote full-moon. His songs stir, reach deep into the heart of love lost, found, and lost again. There is a tear in his voice that belongs to his travels along an American highway. The road is broken with a few regrets, some wasted years, some restored by the music he has journeyed with and his centered confidence in his own songster skills. And the redemption from the demons that have pursued him is not broken. It is a continuous way of a musical Shaman who casts spells with stories and songs that come from the deepest chamber of his heart. In the end, he sits in the backyard garden as he calls up the spirit of legends like Hank Williams, Townes Van Zandt, the father and son Earles, and Kris Kristofferson. But, in the final analysis, while he stands in the musical ancestry of such great artists, his mark is his own as he casts his haunted shadow on the broken road that lay ahead of him illuminated by a light that shines through the joys and tragedies of his 44 years of life.

Welcome to the world of Justin John Rodriguez. 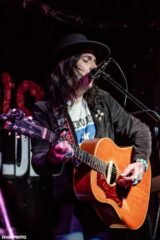 On first hearing Justin John Rodriguez there is a strong sense of originality that rubs up against the familiarity of his lyrical country-blues sound. It’s tempting to believe somewhere deep in his songwriter’s heart, he is haunted, even driven, by the ghost of Townes Van Zandt. But, that’s not it.This original and familiar sounding singer-songwriter is not haunted by any ghost, but maybe is more accurate to say, he is haunted by the same ghost that traveled with Townes, but now it pursues Justin John Rodriguez and brings him the poetic vision of unique country songs.

He may be chasing familiar shadows, but they’re the same shadows once Hank Williams once pursued to an early grave. In their Zen-Gestalt, it’s all there at the core of his sound. It’s the lonely sound in the wind of his voice that engages and invites us to join him. At once original, new, yet familiar. It’s the sound of being chased by life’s demons and the wisdom to know the cost of what he sings about. But this lonesome troubadour isn’t chasing these songs to a pre-mature demise. As his life story reveals, his pursuit in song is quite the opposite. He is writing and singing his way to illumination that leads him to life, revealed and redeemed.

Justin’s familiarity finds a thread in his personal experience of the audience connecting sonically with a songwriter whose own life and perceptions are common to their own. It’s what draws us to Dylan, Waits, Cohen, Williams, and Van Zandt. There is something in the timbre of Justin’s of his voice that feels as if he’s seen the same view of life as the best of our songwriting legends. His voice carries words that are dense with meaning, poetry, imagery of love, regret, resignation, redemption, and renewal. It is what makes the greatest of our songwriters unique the world over. The originality is hard fought and can only come through a life that, in such a short time, has been strewn a sense of tragedy, and a weary acceptance of all that has gone before. His is an original vision that looks into the deeper soul of the life well loved. So, for his audience, on first hearing songs like “Something Out of Nothing.” the words that are sung with such soul, echo across canyons, rivers, and streams of our life and times.

Justin was born and raised in Bridgeport, Connecticut to a musical family. His father is from Puerto Rico and his mother is from Philadelphia. “My mom and dad love music. My foundation was the Beatles. I remember that a lot of my musical education took place on the road. We’d travel in Puerto Rico. That’s how the cultural diversity of my family came alive. We did road trips all over America. The music we all loved was our soundtrack.”

And much of his education in music took place on the road where he bonded so closely. “In the early ’80s I remember being on a road trip. I was just a kid. We’d travel in Puerto Rico, where my father was born. The music was a soundtrack.” He had two distinct musical wells to draw from with his parents. “My dad was really into Dylan and Kristofferson. My mom loved the Beatles.” He laughed and continued, “Once, I asked my mom if she was a hippie. She laughed and said, ‘No! I was a flower child!’”

Being the original soul that he is, he couldn’t find a conventional fit in the world around him as a child. So, he became a musician and started skateboarding. Both are still today significant sign posts in his life that direct him to his own sense of home. It wouldn’t take long for the music to take hold of young Justin. He began playing in bands during childhood. “All that mattered to me was music and skateboarding,” he laughed. His greatest fun was skateboarding and listening to his Walkman during the 1980s. Once, while singing to the songs at home, his mom told him he had a nice voice. “It surprised me. I didn’t know I could sing.” 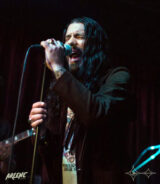 His mother’s comment was encouragement enough to get him to stand up and sing into a microphone in his early bands. “I played guitar in middle school. I was in a couple of terrible bands. We did cover songs. I didn’t know how to break into the ’90s.”

But for Justin the turning point came with the discovery of hard-core punk music and skateboarding. “I never felt connected at school. I was an odd duck. But the community I found skateboarding and in hard-core punk helped me to thrive. It was like we had the greatest secret in the world. For those who were in that world of punk music, it was for people who didn’t fit in.”

Eventually, in 1995, Justin found himself a member of a successful East Coast hard-core punk band, Sum of All Fears. Generally, the style of the genre is dark and meant to disturb and move the listeners to embrace the darker, angry edges of the world around them. Justin’s first successful band was no exception. It was an immersion into authentic, raw, and powerful hard-core music. With one album release and a solid following, lasting fame was elusive for the band.

In 1999, Justin moved to California with a critically successful power-punk band with soulful undertones called Counterfit. The passion found during his years with Sum of All Fears remained in his creative lyrical and vocal approach, tempered by a centered pop sensibility. What resulted was a closer musical movement toward the light that has always seemed to call Rodriguez out to something new and to his original voice of story and song. The band’s genesis began in Fairfield, Connecticut, as a dynamic, energetic musical exploration into what happens when music is bold in attack both in the studio and on the live stage. By 2002, they had released distinctive music. As their bass player and lead singer Justin shows his deep performance dive into the American rock song. Their stage performance is reminiscent of early Who and Sex Pistols stage antics. By 2002 they had recorded one overlooked classic album, Super Amusement Machine for Your Heart, a handful of singles and Eps, and made their mark on that year’s Warped Tour. By 2004, they disbanded. And Justin’s musical road trip continued into alt-country.

In San Diego, Justin became part owner of a bar and joined another critically successful band, Creature and the Woods. He describes them as a “dark Crosby, Stills & Nash sound.” However, musically they proved to be something more. With EPs 2015’s Widow’s Waltz, J Tree in 2019, and one full album called Rise in 2017,they impressively captured a harmonically distinctive folk-rock blend that is engaging and original. Their sound is like a marriage between King Crimson and 1965’s Byrds with a dash of Wilco thrown in for good measure.

With a growing following and a potential for international success, Creature and the Woods suffered personnel changes and eventually went on a hiatus just prior to the pandemic in 2019. Even so, Justin says, “I was proud to be a part of it. To play in a band where I’m not the front person is rare and with Creature, I did that. I believed [so much] in Roger Molina’s songs that I was willing to take the back seat. He was the main songwriter. We still have die-hard fans.”
Beneath his musical ventures and his professional life as a bar-owner, Justin began a 17-year journey into the seductive and consuming path of functional heroin addiction. However, his story here doesn’t include the usual slide to the bottom, even though it was certainly a flirtation into his own mortality.
The good news, of course, is he survived and kept his spirit alive by more self-will than miracle. It was a reawakening. As he slowly found his way out of the darkness of those years, he also began wake up his desire to create original music in a strong and focused way. This metamorphosis took shape during the isolated darkness of the pandemic years between 2019 and 2021.

“Our capacity for rationalization is mind-boggling. Scars all over my legs from using blew out all my veins. I got to the point where I knew I was going to die, but you can’t make somebody get clean. You really want it. I wanted out. I only have two friends who are still alive from those days. I’m glad I experienced it because it made me who I am. I figured out a way that worked for me. Mainly, I wanted to get clean because I was done with it all. Finally, after so much time, I got well, and I could write again. My energy for the music came back.”

Today, he is the troubadour in outlaw attire with the maps and traces of the hard life he lived, which hang onto him like worn-out jeans. But he wears them well, especially through his love for music, which is directly connected to his love for life as it is today.

On his solo recordings the years of artistic growth can be heard in the depth of lyrics and the dusty howl of his vocals, but his sensibility is the same as that of the young artist who jumped into the fire of hard-core punk and danced the edge of the stage with his bass guitar singing the power-punk inspired songs of Counterfit. His days absorbing the lessons of the alt-country-noir sound of Creature and the Woods can also be heard in his new songs as well. But now he draws his musical ancestry from the likes of Steve Earle and Townes Van Zandt.
He says it best in what may end up being a key signature song for his legacy as a solo singer-songwriter, “Something from Nothing.”

Swimming in the darkest sea there’s a light illuminating me
and I’ll follow it to distance shore, a lighthouse in the thrashing of a storm.

Black clouds clearing overhead, I find a rock, a place to rest my head
And everything’s a part of me, something out of nothing you will see

Everything must end for anything worth something to begin
Turning past the darkest hours
walking on, so feet don’t fail me now.

Gunnar Biggs: Stalwart on the Upright