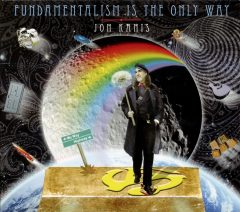 In the “modern age” rock music–since the classic rock era–has grown weary with derivative trends toward electro-pop-dance-negativism that carries no memory of the past or the history that made rock ‘n’ roll great; San Diego Troubadour’s own Jon Kanis’ recent release of new and archival material, Fundamentalism Is the Only Way, is a clear-eyed example of an artist with a vision who builds on his own rock heritage. His aim is to correct the downward trend of rock music decay. With a sense of mastery and an unbridled authority, Kanis’ new album gives a severely brilliant attitude adjustment to the sophomoric pessimism that runs along the current rock ‘n’ roll landscape.

If these songs are mind-journeys painted on the canvas of the late ‘60s psychedelic rock era of the Beatles, the Kinks, the Who, and Pink Floyd, then Kanis’ stylistic take on them is a fresh, original vision that breathes new life and energy into these vintage forms. This album is a fine example of how rock music can build on its past rather than burn it down with empty pretensions and an amnesia riddled with mediocrity. It is a post-punk album unburdened with the need to glean anything from the era of the Sex Pistols–the gentle strains of the Clash notwithstanding.

By contrast, Fundamentalism Is the Only Way adds a layer of modern originality to classic influences on rapid fire lyrics full of meaning, insight, and clever turns of phrase, like “It’s a haiku kind of awareness that leads to love/Viva Vidal, that was Zen this is Tao.” He takes his lyrical themes to the furthest extreme as we journey through political corruption, insanity, psychedelic healing, philosophy, mysticism, and, ultimately, redemption.

“Empire” seems to have been written for today’s political climate when Kanis sings: “heavy is the head that wears the crown/When your empire tumbles to the ground/You’ll know how the emperor wears no clothes.” “Devil in my Head (a trilogy in four parts)” takes the listener on a musical nightmare through the mind of someone having a mental break. “Make a Wish,” is like a natural sequel to the psychedelic hues of Lennon’s “Lucy in the Sky with Diamonds.” It is a blissful love song of devotion and healing. It provides a sense of comfort from the words and images of the suffering in “Devil in my Head,” as he sings: “No limits, no laws, mama ocean concedes/the good things always come with the rain/throw off the new order of being insane/the good things always come with the end of this reign.”

The flow and context of the songs on the album lead us from tale to tale like a soundtrack and a toast to the here and now with subtle(and not sometimes not-so-subtle) references to his influences. As he brings us home with the song “Welcome Home,” near the album’s end, the words that ring most true and authentic are: ”Don’t you ever wonder why you’re always wandering/when you know you’re always happy in your heart/ you don’t ever have to look out any further/for the love you’ve had right from the very start.”

Fundamentalism Is the Only Way is a masterfully conceived slice of rock ‘n’ roll psychedelia fused with power-pop rock that is dedicated to present-day consciousness from an artist who operates with equal inspiration in his own tailor-made renaissance dance between rock journalism, songwriting, archiving and producing, and being a studio artist. It is a signature work and a statement on the post-modern rock schlock of today. If this album is given the chance to shine into the dark world of current rock music, it will bring a very bright light as one of the best rock albums of 2016. It also may just be a primer for upcoming rockers on how to work from the past, bringing something to and alive to the light of day.