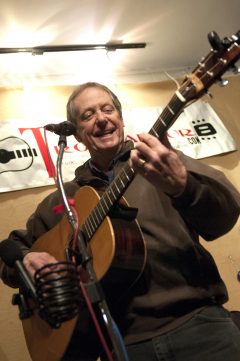 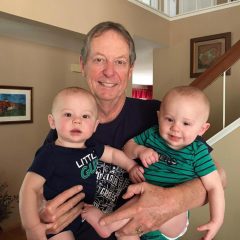 Jeff with his twin grandsons. 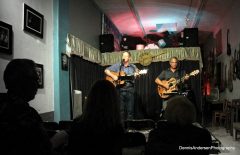 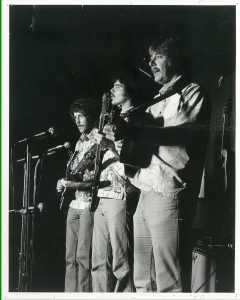 “If we think back on what we were doing 20 years ago and reflect on how recent it feels in the present moment, it gives us an idea of how quickly the next 20 years will progress,” true words spoken by a longtime friend, fellow musician and occasional guitar student. His name was Jeff Lee, a connoisseur of life, a crafty singer-songwriter, entertainer, black belt, veteran, husband, father, grandfather, and overall good guy, who was loved by many. In our most recent guitar lesson last year, we spent a couple of hours playing, a couple of hours reminiscing about the heyday of the San Diego music scene when his group Oh! Ridge and mine, Stone’s Throw, ruled the nightclubs throughout San Diego County in the 1980s, back in the day when a musician would usually work six nights a week in the same room for months as the house band, and finally we spent an hour or so talking about our mortality, the aging process and how quickly our time on earth proceeds. Little did I know I’d have to craft an article about his life so quickly after our last discussion. Lee died on July 3rd from a mountain biking accident. So, on that note, I now defer to life reflections by the many who loved him and knew him well, paying homage to his life and musical times, beginning with longtime friend, musical sidekick and Oh! Ridge partner in crime, Jerry Gontang.

Reflections from Jerry Gontang and Jeff’s wife, Carol: “If you ever attended an Oh! Ridge show, you have fond memories of the evening. Usually those memories were spawned by founder and leader Jeff Lee. The band prided itself with a collective effort of comedic timing and accurate harmonies that came about by constant practice and a grueling work schedule. 40-plus years of music and humor were kept alive through Jeff’s energy and his ability to read an audience. Parodies and funny songs, along with props and gimmickry, kept audiences entertained and laughing for decades.

Jeff had rewritten a travesty of Peter Paul and Mary’s hit “Puff the Magic Dragon” and it became the group’s most requested song. Other satirical hits included “Dick and Jane,” “Loving You,” “The Fish Song,” “Dead Dog Rover,” and the show closer “Rodeo Song,” plus many others too profanely titled to name here. Is that a smile on your face? His ability to focus and engage one table at a time allowed him and his sidekicks to make everyone in the room feel like they were a part of the show. Jeff’s degree of ribaldry became more intense as the evening progressed and this was made possible by the statement “we’re an equal opportunity offender, we f#@k with everyone,” or “this show is like a door knob, everybody gets a turn.”

The famous kamikaze airplane and drink wheel specials made a lot of bars, restaurants, owners, managers, and patrons happy people. One of his favorite quips,”The drunker you get, the better we sound,” became a motto that audiences revered. The “Toast! Toast back!” routine, borrowed from a fellow entertainer in Sun Valley, Idaho, and followed by a limerick, insured nobody was left ignored. The show usually started out with a docile dinner set and ended with the last set being triple X blue humor. Inappropriate? Maybe, if you didn’t have a sense of humor. Entertaining? Always, from beginning to end. That’s just how Jeff Lee planned it.

His part-time career as a music teacher in the elementary school system caused many double takes from parents who had seen the Oh! Ridge show. A three-battery Mag flashlight kept in his back pocket was used to single out people in the audience. There was no mistaking who he was talking to. Jokes were a good portion of the show and he was always coming up with new material. Not one to be outdone by hecklers, his Don Rickles style of banter left them outwitted and wishing they had never started. At a recent Oh! Ridge reunion that lasted four and a half hours, Jeff was the only member who remained on stage. When asked how he was able to play for so long, he immediately replied, ‘Depends?!’

Although he was the driving force behind the band, he was much more than Oh! Ridge. Jeff and his wife, Carol, were married on October 26, 1980. They have two daughters, Jessica Taylor and Allison Lee; son-in-law Michael Taylor; and grandsons Jackson and Lincoln Taylor. A proud papa and grandpa, he could be seen swiping pictures into his iPhone while giving brief excerpts of the children’s progress to friends and fans intent on hearing updates. A native San Diegan, he attended Crawford High School, Mesa College, San Diego State University, and served in the United States Navy. Attending open mics opened doors to a solo career playing private parties, corporate functions, restaurants, festivals, and coffee houses. Outside of music, Jeff also had an interest in musical theater, playing roles in his daughters school plays and local theatrical troupes. He was an active member of the Ancient and Honorable Order of E Clampus Vitus (ECV), a fraternal organization dedicated to the study and preservation of the heritage of the American West, especially the history of the Mother Lode and gold mining regions of the area. An avid mountain biker and second-degree black belt in karate, he was well versed at getting from point A to point B via dirt trails and more than competent at fighting his way out of a paper bag.”

From former Oh! Ridge band member Ricky Araiza: “Jeff was the instigator of Oh! Ridge; he was the prime mover, the big bang for this period of music for so many friends and family. We had lots of happy moments and good times thanks to our brother Jeffrey and we are all supremely in debt and equally sad for his loss. Bye brother. miss you already!”

From singer-songwriter Joe Rathburn: “I arrived in San Diego in 1979. I had been performing back in my home state of Michigan, making great money in a chain of steak houses. They were part of the Foodmaker chain which owned, among other things, Jack in the Box. The regional manager told me that I could go out to San Diego and get a gig playing at one of their affiliated restaurants, in particular, the Monterey Whaling Co. When I got here I was in for a rude awakening, as those restaurants already had acts that were playing every night, and packing them in to boot. One of those acts was Oh! Ridge. Jeff Lee and Jerry Gontang along with Steve Yarberry owned every room they played with their mixture of comedy and music, with the emphasis on comedy, of which I had very little, and still don’t to this day. But it was always the chemistry and timing between Jeff and Jer that made that act click. Jeff always had a lightning wit and a pocket full of jokes; he was the edgier, racier and more sarcastic of the two, but they both were dedicated to making their audience have a good time, no matter what.

We never really hung out as close friends but they’d always treat me like a star whenever I’d get off of my gig early and rush over to see their last set. They’d always have me get up on stage and sit in. They both were respectful of me and my act, and though I was always kinda chasin’ them, trying to get booked in the same rooms they were in, they were both always supportive and friendly.

One of the last conversations I had with Jeff, I recall poignantly how he and Carol were getting ready to start livin’ the golden years, and enjoy life more.”

From Walt Richards, multi-instumentalist teacher and performer: “Jeff Lee entertained thousands. He gave us laughter and joy through his music. He respected his fellow musicians and encouraged them to share their talents along with him. He was an inspiration and mentor to many in San Diego and an early pioneer in the professional acoustic music scene helping pave the way for many of the musicians who followed. Jeff gave his life to his music and his family. I am so lucky to have known him; I will miss him.”
From Ed Douglas: Currently a contented ceramic tile pop artist, Douglas was in the original Scottsville Squirrel Barkers lineup, a legendary 1960s local bluegrass band that featured the likes of Chris Hillman (the Byrds), Bernie Leadon (the Eagles) and Kenny Wertz (Flying Burrito Brothers). He shared his thoughts about Lee, who often sat in with the reunited Barkers from the late 1990s forward. “Jeff and I became good friends. Many of the folk and bluegrass community would gather socially and musically at Jeff’s house on Sundays, he was a great guy who loved music and life.”:

From Al Hollar: “I met Jeff in Tucson in 1978 playing with Oh! Ridge at the Putney St. Pub. He was funny, bright, unpretentious, and welcoming to a wandering harmonica player from North Carolina: he was a large part of the reason I moved on from Tucson to San Diego later that year. He gave me chances to sit in and play with Oh! Ridge, introduced me to dozens of interesting players, and showed me some of the life of an actual performing musician. While I have long since returned to North Carolina and mercifully allowed some of my poorer decisions in California to blur, I will never forget Jeff’s kindness and humor. He had no reason to like and welcome me, and yet he did.”

From singer-songwriter Charlie Imes: “Some people are just genetically designed to make people laugh and smile, and Jeff Lee was royalty among these people. From the first time I saw him and Jerry Gontang play to a packed house as Oh! Ridge, it was clear that Jeff was not only a natural performer, but he also possessed an infectious sense of happiness. That became clearer to me the longer I’d known Jeff. On too few occasions I got to share that energy on stage with him, as our paths kept us busy and crossed too rarely. But he was more than just an ever-present smile and quick wit. He was a great musician, player, singer, entertainer, and friend. There are too few of those in this world and we weren’t ready to let this one go. Even in Jeff’s tragic untimely passing, he reminds us that life is too short and to cherish the time we get to spend with our friends and loved ones. Thanks, Jeff and toast back buddy.”

From fellow troubadour Jeffrey Joe Morin: Jeffrey Joe, who posted this on his Facebook page in his daily top 10 gratuities from July 5. Sadly, Morin passed away 12 days later on July 17th. (Look for a tribute to him in the September issue.)

Shane Hall: Outside the Wire

Lindsay White Is Ready for the Main Event