January 2023
Vol. 22, No. 4
James Lee Stanley’s Search for Timelessness by Frank KocherMarch 2016
Back with a Bang! Java Joe's Reunion at San Diego Folk Heritage by J.T. MoringMarch 2016
Book Review: The Philosophy of Modern Song by Bob Dylan by Ted BurkeMarch 2016
Rick Nash: Bass Man in Demand by Wayne RikerMarch 2016
If Music Be the Food of Love, Play On: Dually Noted Pairs Fine Food and Fine Music by Paul HomiczMarch 2016
Mod Revivalists the Trebels to Reunite for 40th Anniversary Show by Jim TrageserMarch 2016
Harold in the Land of Jazz by Bart MendozaMarch 2016
Sephardic Dance and Music by Yale StromMarch 2016
Loretta Lynn: A Special Tribute to the Queen of Honky Tonk by Terry Paul RolandMarch 2016
Ben Grace Gilmore: It's All About Building Community by Sandé LollisMarch 2016
Advertisements 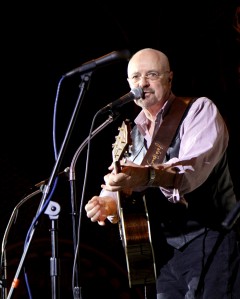 He’s billed as a “freelance human being,” a singer-songwriter in the midst of his fifth decade as a performer. He is as active in 2016 as he was in 1970. Southern California roots musician James Lee Stanley’s music has appeared on 28 albums, and the singer/guitarist has shared stage and studio with many top artists. Maybe author Tom Robbins (Even Cowgirls Get the Blues) puts it best when assessing his impact: “So where have they been hiding James Lee Stanley? We could say that James Lee Stanley is the last great undiscovered singer-songwriter in America. But true as that may be let’s say something else, let’s say that a diamond has been smuggled into the wasteland… and here is where the wasteland ends.”

Stanley, a frequent visitor to San Diego, will be appearing this month at Joe Rathburn’s Folkey Monkey concert series. Attendees will see a veteran of the road who has honed his skill for decades, mixing an arresting vocal style with clever wordsmith talents, guitar prowess, and a humorous stage persona.

“I write a lot of serious songs, and I tend to introduce them with some absurd and outrageous monologue. I like making people laugh and I like taking them on a journey when I perform live so I do comedy, and I’ve toured with a lot of famous comedians. I learned a lot about doing standup comedy from those people, and I do comedy in my shows, but the songs usually aren’t just funny songs. I follow the muse, I try to follow what the song needs–sometimes there’s a little bit of fun in there.” While doing these gigs, he often ends up heaped with praise for stealing the show with a performance that blends musical edge with a funny presentation. Reviews read like this: “The show was stolen by the opening act… James Lee Stanley,” or “…the unexpected delight of the concert was the opening performance of James Lee Stanley.” Others make mention of his connection with the audience-and multiple standing ovations.

Born in Philadelphia, Stanley got an early start, first performing at age 14. He learned guitar by slowing down record albums to 16rpm on old record players to learn the songs, even in the wrong key. He credits his parents for inspiring an attitude to learn to do things the right way.

“What got me going when I first started playing was that my grandfather was a musician. He could play the piano and he could play guitar and he could play the mandolin and he could play the trombone–he was one of those musical guys, you know? He played music and my uncles played music, so the first music I learned was the music of their era, which means I learned all of the tunes from the twenties and thirties. All of these extraordinarily well-written songs. And then, as I became aware of my own generation, I started listening to early rock ‘n’ roll, and in around 1958, folk music when the Kingston Trio first got started. By 1960 I was engaged with the folk music thing and I played Bob Dylan–he was another enormous influence, of course, and Joni Mitchell.”

He has other musical favorites and influences, but a common thread seems to be smooth harmonies and smoothly produced pop.

“I started out with the Beatles and they still have a resonance for me, I think they do for almost everyone. The Eagles, Steely Dan. I like to listen to something that inspires me to go practice, to work harder, you know what I mean? The songwriting bar that the Eagles and the Beatles and Steely Dan set is the bar that I try to set for myself and everyone else.”

Not only are the Eagles a big influence, but their Hotel California is one of his favorite albums, along with the first Crosby, Stills and Nash LP, and Court and Spark and Blue by Joni Mitchell. He also admires the three great Beatles albums beginning with Rubber Soul and the Beach Boys’ Pet Sounds. He considers these discs classics, which he strives to match when he records his own albums–“timeless, accessible, and resonant.”

Besides the greats, Stanley also has praise for lesser-known roots musicians like Chicago’s Michael Peter Smith, Boston’s Tom Prasada-Rao, and Melissa Greener from Nashville as well.

“There is a level of expertise in this country that media are simply not aware of– wonderful songwriters, wonderful musicians, wonderful recording artists. However, they aren’t supported by major media so nobody knows them. It’s under-the-radar stuff. There’s just a lot of people like that- who aren’t really known, but who are so good.”

Guitar in hand, after a stint in the Air Force, Stanley studied music until graduation from Cal State Northridge. His first recording gigs were from 1970, when he was friends with Mama Cass Elliott. After getting a contract and an eponymous debut record in 1973, his albums were critically well received and under promoted. On his own–at his request–after 1974’s Three’s the Charm, he released a few records for various labels, then decided to started his own Beachwood label in the mid ’80s. He has routinely released new music every couple of years ever since.

His music doesn’t shy from political messages, and that is by design.

“No doubt about it that in the mid-’60s, musicians were very political, they were very involved in what was going on. They had opinions, and they voiced those opinions. Then, we got into this era where the media and politicians seemed to think that musicians had no right to have a political stance, and that they had no right to take advantage of their notoriety to broadcast that stance. It’s a complete double standard.

“The fact that matters is: if you are an intelligent person and are living in a democratic republic like this one, you have a responsibility to be informed, you have a responsibility as a citizen to be involved. If you don’t, you get those clowns we have on the Supreme Court, and you get someone like Paul Ryan as the Speaker of the House–a man I wouldn’t let wash my car.”

Stanley’s songwriting goals are rooted in his early musical experiences, and their lasting impression.

“I always try to do things that are timeless, which could always be songs, because the first songs I learned were timeless songs. Thirties and forties songs that were exquisitely written and elegantly phrased. People are still doing the Great American Songbook, even though it is now 75, 80, 90 years old. Every artist at some point tries to tackle those songs. Glenn Frey did it, Linda Ronstadt did it, Rod Stewart did it, everybody at some point goes, ‘Wow, I’ve gotta try those real songs.’”

His most recent disc, 2014’s The Apocaloptimist and includes some of his most personal compositions, some snapshots of experiences along his path.

“As an artist you respond to what happens around you. The first song is called “Living the Party Life,” and it’s actually a condemnation of the new nihilism, where there’s nothing we can do so let’s just have a good time. I tried to write a satirical condemnation of that, but I also like to make a song that’s so fun to listen to that if you don’t subscribe to the lyrics, it doesn’t matter. The second song, “Gypsies in the Hallway,” I actually wrote about lobbyists, which I think is a cancer in our government. I did a song about my parents (‘Here We Have My Father’). I’m not one of those guys who sits down and writes hit songs; everything that I write has emotional and experiential resonance before I can write it.”

He doesn’t limit his music to his own compositions. With pals John Batdorf and Cliff Eberhardt, he has three albums out of rearranged acoustic covers of Rolling Stones and Doors classics that are extremely popular.
“It started a series, the label now wants me to do one every couple of years. So, the next project I’m thinking of doing is working with Dan Navarro–from Lowen and Navarro–and we’re going to do another one of the rock giants and completely rearrange the songs so that they sound like they were written by a couple of guys in Southern California with two acoustic guitars. The first one of those was from 2004, airplay and sales continue. It’s been on the radio for 11 years.”

Stanley shares his decades of experience in other ways besides performing. The producer and arranger of his own records, he has a blog site that is a veritable encyclopedia of “how to” for the independent musician.

“I created a blog called datamusicata.com, and there are about 600 articles there that I wrote about every aspect of being an artist, a composer, a performer, or a recording artist. How to buy a guitar, how to tour, how to use a microphone, how to best tune your guitar, how to be a house guest, everything that I could think of that would help people, and it’s a free blog. There’s no advertising on it, it’s just me putting up everything I could think of to help people, and I want people to be aware of it. There’s also a search engine on there, you can just type in booking yourself and nine articles will show up, or how to use a microphone, whatever you want to know.” Booking agents and George Winston have posted on the site, and Stanley welcomes input from others in the industry. He isn’t all business, though, as a trip to his impressive website will reveal that he managed for years, when in the LA area, to get into acting as a Klingon and Bejoran on multiple episodes of TV’s “Star Trek Deep Space 9” series. Yep, living the Trekkie dream, with full makeup.

“I am of the opinion that as an artist, you should spend your entire life trying to bet better at what you do, with the knowledge that you’re never going to be where you want to be. You could check that old joke–‘Every time I think I’m on top of it all, they move it.’ At the same time, in the past six months, I’ve written seven or eight, I believe, remarkable songs. Some of the best I’ve ever written. It amazes me that after 28 albums to be writing what you think is even better stuff.”