January 2023
Vol. 22, No. 4
Satire Is Not a Dirty Word: Interview with Spud Davenport by Charlie RecksieckNovember 2020
Back with a Bang! Java Joe's Reunion at San Diego Folk Heritage by J.T. MoringNovember 2020
Book Review: The Philosophy of Modern Song by Bob Dylan by Ted BurkeNovember 2020
Rick Nash: Bass Man in Demand by Wayne RikerNovember 2020
If Music Be the Food of Love, Play On: Dually Noted Pairs Fine Food and Fine Music by Paul HomiczNovember 2020
Mod Revivalists the Trebels to Reunite for 40th Anniversary Show by Jim TrageserNovember 2020
Harold in the Land of Jazz by Bart MendozaNovember 2020
Sephardic Dance and Music by Yale StromNovember 2020
Loretta Lynn: A Special Tribute to the Queen of Honky Tonk by Terry Paul RolandNovember 2020
Ben Grace Gilmore: It's All About Building Community by Sandé LollisNovember 2020
Advertisements

Author’s Note: I’ve long found that readers here in the San Diego Troubadour are really supportive not only of local music but also of the musicians themselves. The COVID-19 pandemic has affected every facet of society, including live music and the people that make that music.

I’m really curious what musicians I know are doing in this strange new world order. And what creative approaches they are taking to music instead of sitting back waiting to be discovered—with or without a pandemic. So, I’m kicking off a series of talking to music friends and asking them, “What are you going to do about it?”

This month, a natural starting point for me is talking to my good friend and frequent collaborator Spud Davenport. He and I write and perform as Leaders in the Clubhouse. But Spud has also recorded great music in San Diego as a solo artist and with the Shamey Jays plus bands in Los Angeles in his previous life.

Spud is one of a kind, a good friend, and a man who lives and breathes music. It’s a natural that he’s created a community and radio station out of satirical music. 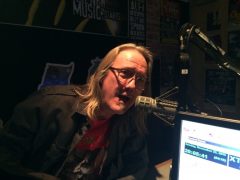 Spud Davenport on the mic.

Q: What we’re here to do is we’re going to tell everybody out there in Troubadour land and on the internet about Spud’s latest venture, Satire Rock City. Tell the folks what it is.
A: In my search to find my audience and build my brand I thought I’d try to work the whole satire angle since that’s what I do. I started a Facebook group called Satire Rock City just to get members and share satire music, you know, sarcastic, cynical, ironic tunes and things like that. It’s been going crazy. We’ve got over 1600 members right now. It’s been growing, and when I started that I had a member contact me and say, “Hey, I have a radio show in South Africa. Would you like to do a little weekly show?” I never thought about that, but I said why not? So, I do this little teeny tiny show every week. And, uh, 35 shows later, here I am. Then I decided to do my own internet radio station just to air it and other music. It’s a conglomeration of my radio program and music from my local buddies and the Kinks, from ACDC to Frank Zappa and all in between.

Q: What’s the ethos of Satire Rock City?
A: Well, I try to keep it pretty much, you know, classic rock and progressive rock and indie rock, but all with a little bit of some sort of satire or tongue in cheek, which my favorite music has always been.

Q: Having the radio shows in play on the Live365 channel makes you act kind of like a DJ for the station, even though it’s pretty automated and 24/7.
A: It’s all auto DJ. I’m pre-programmed but it’s still random. Every show has some sort of a theme. At one point I did the seven deadly sins where every show is a different deadly sin and coming up I’m working on the five senses series. Otherwise it’s just like whatever pops into my head. I have a show on first aid and I have one called “The Award Show,” which features “Trophies” by Leaders in the Clubhouse if people aren’t sick enough of you and me.

Q: I really love the station; I do encourage people to try it. And, also, because I’m kind of cheap, I don’t do the paid Pandora. You generally have to make a choice everywhere: I’m paying to listen to no ads, or I have to listen to ads. Satire Rock City is kind of best of both worlds.
A: The station is totally free. And you don’t have to listen to ads. So, we’ll see how long I can sustain this financially. But right now, it’s fun and I’m putting my all into it. 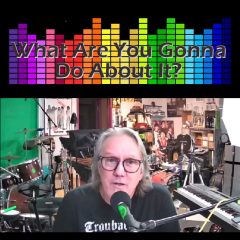 What are you gonna do about it?

Q: What do YOU mean by “satire?” Humor or cleverness? People might make the mistake of thinking it’s song parodies, or like Flight of the Conchords, but that’s not what Satire Rock is.
A: No, I’m not a fan of parody. I mean, I love Spinal Tap, but even they’re not making the cut yet on a program. There’s no Weird Al—sorry. It’s a little bit more serious than that in a way; it’s just fun stuff and it’s not like everything has to be sarcastic or cynical. I mean, there’s songs like “Maggie May.” I don’t care if I was doing a Christian rock station, I’d still have that one on there because it’s just a great record. And I’m always looking for more material. So, if there are any local artists out there that have songs that would fit in this category send them to me. I’ve got C-Dale [Christopher Dale] on a couple of tracks. The community should be much more part of it and especially get some humorous songs out there. Put your funniest foot forward. Not necessarily even funny, just kind of clever and feel-good. A good example is a Christopher Dale’s version of “Crazy Train,” Ozzy Osborne’s tune. He slows it down and you really hear every single word and it’s just awesome and it fits the format.

Q: Like our tag line when we were pitching Leaders in the Clubhouse, was it was “fun rock?” To me, things just get a little too serious. Every band’s head shots; they’re all kind of scowling and stuff like that.
A: Yeah. There’s not a whole lot of emo on my station, right.

Q: You were in bands in LA during the ’80s, which was kind of party time for rock ‘n’ roll, which is also fun. What do you kind of see as the difference between playing in LA then versus now?
A: Well, the LA scene is always going to be a bigger music scene than most places in America, any decade. It’s just the way it is. We had a band called ToyMuzic that did really well for a while. We played this place [pointing to LA’s “Troubadour” t-shirt]. …

Q: Oh, I get it. I see the shirt now.
A: Yeah, a little shout out to all things called Troubadour. We had a song in a movie. Stuff like that that you wouldn’t normally get if you were living in Iowa or something. You just meet people and you advance just by knowing people and schmoozing with them. So that’s the difference of Los Angeles versus a lot of other cities, right? There’s more schmoozing or, this quality of schmoozing is better. Like the bass player you’re going to run into and get to play on your project is probably better than one you would’ve met back home.

And you bump into people all the time. I got to have martinis with David Lee Roth in the front of the Troubadour, the front bar. The Ringmaster. He came in because I was hanging with a buddy of mine who did engineering on all those early Van Halen records and Terry and I asked him to come in and Terry says hi. So, he came over and he said “martinis all around.” You know, I don’t even like martinis, but hey, you do what Dave says.

Q: I wouldn’t have picked that as David Lee Roth’s drink of choice.
A: Yeah. But that’s just the way he was, he was a crazy guy. And I’m speaking of Van Halen; I was just peeking in this morning on the station and playing Van Halen’s version of “Where Have All the Good Times Gone.” Rest in peace, Eddie.

Q: I love it. Well, what’s next for you and for Satire Rock City, the Facebook group?
A: I am going to double up the length of the show. As of this Thanksgiving, this teeny-tiny program will be 30 minutes, giving more time to expand each weekly theme. And we continue to grow the audience, really trying to get people to realize that satire is not a dirty word. You know, somehow along the way, you know, the younger generations just think, wow, we can’t laugh about that. You know, we can’t joke, but I’m just hoping that this’ll turn around. You’ve got to laugh at stuff also.

Q: The one thing that drives people like the current president or any authoritarians the craziest is to actually laugh at them.
A: That’s the only thing that kind of reaches him. And most countries around the world, they find that’s the only way to deal with dictators. Well, I’ve been trying to finish this record that I was working on before somebody twisted my arm to do a whole record for Leaders in the Clubhouse. I’m still working on that album, I’m trying to put it together working with my buddy, Andy Machin, over at Big Rock Studios. So hopefully that’ll be out spring of next year. Maybe it’ll be called the vaccination album or something.

Q: And don’t forget Spud’s own music. It’s fun. You can listen to it at www.spuddavenport.com. From there you can visit the Spud store, just get the music directly or just listen to it and kick the tires and see if you like it.
A: Yeah, I got all my stuff and all the Leaders’ stuff on spuddavenport.store. Come check it out.

Q: Well, thanks for telling the people and thanks to the Troubadour for letting two musicians talk.
A: Thanks, Charlie. And thanks to all of you guys that actually listen to local music. It’s terrific. We can’t do it if people don’t listen.

Listen to Satire Rock City at https://live365.com/station/Satire-Rock-City-a14450 and you’ll also find the weekly radio show expanding to 30 minutes in November.

The Creative Mind of Catherine Barnes