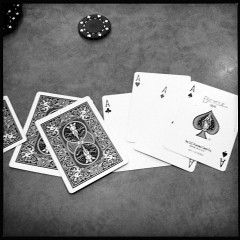 I love to play the game of poker. Of all the card games (except Uno, of course), I’ve always been particularly fascinated with and/or mystified by it. I most specifically mean the No-Limit Texas Hold ’em variety, but there are welcome variations that come into play during our weekly $20 game.

Pictured here for example, is an actual hand I was recently dealt while playing a variation of seven-card stud called “Black Mariah,” wherein the winner of the hand splits the pot (winnings) with the player who holds the high spade “in-the-hole,” meaning one of the three cards that will be dealt to the players “face down.” Even those of you with a passing familiarity with card games can most likely surmise that four aces is a very good hand to have. In fact, only two hands beat it: a straight flush or a royal straight flush (and the odds of being dealt that particular hand are 30,939 to one, fyi).

What makes poker such a great game for me, is that this particular hand wasn’t only about having great cards. It was also about how they came down and how myself and the other players played them.

Case in point: There’s eight of us playing, the dealer (two players to my left) calls the game and we all put our ante of 50 cents into the pot. Dealer deals each player two cards down each, then a third card “up” in front of each player. The strength of this card determines who will bet next. In this case, it’s me, being that I have an ace showing.

My “problem,” if you want to call it that, is that I have also been dealt two aces down. I have three aces, strongest hand possible. I have to not react in the face to this sudden influx of information. I don’t want to get too excited; someone might see my pulse racing in my jugular or sense a reddening of my ears, or maybe I’ll get too chatty or I’ll bet too hard and chase them away…

I decide to bet a dollar, based upon the obviousness that my ace is the best card showing. This gets rid of three players, but the good news is that there’s still four other players “in the hunt.”

What they’re hunting for are more cards to build a better hand (only five of the seven cards dealt each player are playable), and another face-up card is dealt to each of them. A player to my left is showing a pair of fours. He bets a dollar (I should probably point out that 50 cents would be the “regular” bet at this game, so the dollar bets are a little bit aggressive.). The next player “calls” his dollar bet, the next player folds… bet is to my ace-seven.

“I raise a dollar,” I say calmly, confident that both remaining players will call that bet in order to protect their investment in the hand so far. This bet is intended to help “build the pot,” making for a bigger win at the end of the hand. This is of course made all the more necessary by the possibility that the winner may have to surrender half of the pot to another player anyway.

Another card, face up. Mr. fours gets a three. Player two now shows three hearts, a possible flush. That would beat my three aces and I have only added a 10 to my seven.

“Three dollars,” Intones Mr. Fours. I view this bet as his way of chasing off Mr. Flush-draw before he can actually catch his fourth or fifth heart.

Mr. Flush calls quickly. His attitude tells me that he probably has a very high spade in the hole, if not the flush already.

Now, in the face of a $3 bet with two cards still to come, I have to re-evaluate my once promising hand. I decide to stay in, with three chances to pair up my seven or 10 (giving me a full house) or receive the high buried spade when the last round is dealt face down. “I call.”
One more card. Mr. Fours becomes Mr. . Mr. Flush receives yet another heart, pretty much assuring us he indeed has a flush, while Mr. Threes and Fours could in fact be Mr. Full House at this point. These are great hands to have, so these two are obviously going to stay in until the end no matter what the bet is now.

Mr. Threes and Fours bets three dollars. I view this bet as his way of chasing off Mr. Flush-draw before he can actually catch his fourth or fifth heart.

Everything had happened the way I wanted it to except for the actual cards. I gathered mine and began to fold them. Then I suddenly realized there wasn’t another ace showing anywhere, that there could still be one in the deck and that I could still catch a full-house or the high spade.

“Call $6,” I say, almost inexplicably. Mr. Threes and Fours stays in as well.

“Wooooooo…” came the murmurs, three players in for $6? With two more cards coming? What could they have?

One more card up: I get another 10, giving me a concealed full-house, aces high! Outwardly,

I don’t appear to have much. Two pair maybe, or a high spade.

Threes and Fours checks the bet. As does Mr. Flush.

Mine is the ace of Spades, giving me four aces AND the high buried spade. In other words, both halves of the pot are mine.

Threes and Fours bets $8 and Mr. Flush calls him.

At this point, both of these players are now pot-committed. They’ve invested so much into the hand by now, that it actually makes more sense to see it through to the end.

I show my ace of spades.

“Ouch, man!” says Mr. Flush, throwing down his king of dpades in disgust.

“Oh, I beat that too,” I say offhandedly, as I display all four of my Aces.

There are lessons herein: sometimes you go with your instincts…. You can’t win if you don’t play…. It’s not the cards you get, it’s what you do with them…. If you start a plan, have the patience to let it mature fully… it’s always the stuff you don’t see coming that gets you…
Please pick any of these metaphors and apply them to your next recording project.

Sven-Erik Seaholm is an award-winning independent record producer, singer, and songwriter. www.reverbnation.com/seaholmmackintosh He hopes his poker buddies enjoy reliving these magic memories as much as he did. Does. Will.