Hello Troubadourians! I am a member of a demographic that has a prestigious and sometimes derided position in the world. I’m a Boomer and we seem to be a rapidly thinning herd. In the past few months, I have played in two memorial concerts for friends from the music scene who have passed, and I have read about at least three other such concerts. I have previously written about the concert for Michael Hart. And last month, while writing about my pedalboard, I mentioned in passing about having been in rehearsal but I didn’t say that the rehearsal was for a memorial concert for David R. Morgan, a friend and bandmate who passed away in late October last year. I did mention Nancy Mestyanek who had left her mark on my pedalboard and who had passed away several years ago. She is still missed. Many times, while we were rehearsing David’s memorial show, and even afterward, I was asked what I might want for my memorial. It sort of became a joke—a macabre joke but still a joke—that I really don’t have an answer for. I certainly hope that such an event is many years in the future. Maybe by then I’ll have it figured out. 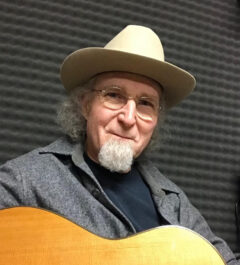 David Morgan—known to his friends as Captain Morgan—was a multi-instrumentalist, songwriter, singer, and producer but was primarily known as a stellar pedal steel player. Mark C. Jackson wrote a very moving and detailed memorial article about David in last month’s Troubadour. I recommend you read it. My interaction with the Captain was limited to four rehearsals and five gigs. Yet in that time I could tell that I was in the presence of someone special. I had no idea how that would manifest until I had to learn and arrange some of his songs for the backing band chosen to perform at the memorial show. His songs presented a vision into a unique talent. Simultaneously simple and challenging, David’s music possesses insight into human relationships, which are expressed in lyrics and melodies that lodge in your consciousness and refuse to leave. We obviously used his recordings as the guide to learning his songs, yet we knew almost instinctively that we would have to create our own interpretations of them if we had any expectations of performing them on our own. David had such a personal relationship with melody and time that even those of us in the band who were very familiar with his music and who had played with him far longer than I did, confessed to not really being able to follow him as we might do with any other musician. Such was the singular artistry of David R. Morgan. At one point I remember saying that his feel reminded me of jazz piano legend Bill Evans. That statement was met with a resounding, “Yeah!” from my bandmates.
As I write this column, it was just two days ago that all of the planning, organizing, and rehearsal came to fruition at David’s memorial concert. After six weeks of working on songs, some of which would be sung by people who we would play with once before the actual performance, we made it happen. “We” being Mark C. Jackson, Pamela Haan, Paul Cruz, David Wilkie, Drew Decker, Kenny Wilcox, Jason Postelnek, David J. Sherry, yours truly, and of course David’s son, Aaron Morgan. Everyone worked very hard on what was truly a labor of love for all of us. We were all close before but we became a family as much we were a band. Exploring the nuances of David’s songs from each individual musician’s perspective and experience was a university-level education for me. We could all feel where the songs were leading us, and the stories and memories that were shared during rehearsals made the experience even richer. Hearing everyone express their attachment to the music, either having recorded it, played it live, or both, brought depth to the performances far beyond just getting the chords and harmonies right. Having Aaron perform some of his father’s songs, as well as one of his own compositions, assured that David’s legacy would be more than just his old friends playing his songs for a memorial show. I know that our trio, Outliers, will be incorporating several of David’s songs into our repertoire as will the other musicians in the band that performed the show.
But what does all of this mean to the reader of this column who neither attended the concert nor knew David? Well, that is a very good question. I’ll try to answer it…
It is easy to assume when watching a concert, either live or on TV, that it “just happens” because that’s what musicians do. Professional musicians make it look easy; that’s their job. But it isn’t easy. It is a lot of work. Even when you are a self-contained band playing your own songs, getting all of the parts, vocals, harmonies, staging, song sequence, stage presence, even choosing the right clothes, has to be consciously planned, worked out, and rehearsed. Nothing is accidental. Even dealing with the inevitable technical problems are discussed and provisions are made for backups, and backups for the backups. Knowing what to do when something doesn’t go like it was rehearsed is, ironically, also rehearsed. Yeah, I know… that is really weird but it’s what professionals do. And that is just one band doing its own show. Imagine the work that is required for something with multiple bands each with their own requirements, or as it was in our case, as a backup band learning songs for a singer who would only be present for the first time at sound check to play the song once before the show. We rehearsed twice a week for six weeks and had to work around the schedules of nearly a dozen musicians and performers. To their supreme credit, everyone put in the work required to make the show successful. And with no pay I should add. They were in it for love but just the same, everyone put in a professional-level effort. I think that is the take-away for anyone who is a performer and is reading this column; if you are invited to participate in something like this memorial concert and you decide to accept, you are obligated to work at it like a professional and give it all you have. Respect the mission, your fellow musicians, and especially the audience who comes to see the performance. I hope that everyone who is willing has the opportunity to participate in something greater than themselves. Enjoy the work and cherish memory of having done it well.
Need to know? Just ask… Charlie (ask.charlie@hotmail.com)

Things I Don’t Do…