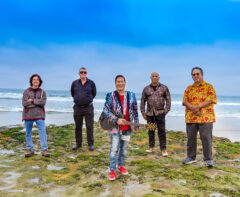 Rob Shinno, a ball of energy wrapped in a rainbow cape, stands on the stage at CityFest 2022. As members of his band, Hemisphere, launch into a cover of the Bowie tune “Rebel, Rebel,” a wave of happy-manic energy washes off the stage and into the crowd. That’s because Rob exudes a high-octane joy, a purely concentrated capital-H Happy that is contagious, propelling the band’s new album Unity to a spot on the national charts (read the review of Unity in the August issue).

The positive energy is intentional since it is central to Hemisphere’s mission. “We look to try and write uplifting music with lyrics to inspire people to be their best and to live the best life the can,” Rob says. “It’s too easy to get mopey about the future, but in fact the future is yet to be written.”

The future, which has lately echoed the dystopian nightmare scenarios of fiction like The Handmaid’s Tale and 1984, can cause a lot of stress and anxiety. Music may not be the cure, but it can certainly be a great reminder of what is good and possible in human beings. Hemisphere is an originals band, certainly, but it is also a purveyor of hope via a prog-rock style that echoes previous styles of music but has a unique sound of its own.

“We work hard to make every song a unique mash-up of two genres or styles that don’t normally go together,” Rob says. “That’s why you hear something like Bowie’s “Rebel, Rebel” in a reggae-ska style with horns replacing the class guitar riff. Steely Dan, of course, comes to mind, but we are also influenced by Bowie, Elton, Queen, Morrissey, Genesis, Manhattan Transfer, Level42, Lettuce, Pink Floyd, Supertramp, and Metheny, just to name a few.”

To celebrate the release of the second album of a trilogy, Hemisphere will perform at Humphrey’s Backstage Live on Oct 22nd, at the same venue where the album American Dreams was launched in 2021. (Album three, Power to the People, is slated to be released next year.)

“In Hemisphere style, we’ll have a very immersive lighting and performance stage set up,” Rob says. “We are calling the show ART + DANCE as we will have a set that digs into our back catalog a bit, then we will come back for a second set that is meant to get folks up and moving!”

A great cadre of local music luminaries will be on the bill. Vocalists Janet Hammer and Leonard Patton will be on hand, as will horn players Paul Seaforth and Chris Klich. “Besides our ten-piece live band, we will also have some very special guest performers with us that night,” Rob notes. Tickets are available through Ticketmaster or by using the link at Hemipsheretheband.com

A little taste of Hemisphere

Recording the trilogy of albums has been a labor-intensive endeavor, made especially difficult by the Covid shut down. But Hemisphere persevered. “So many styles get covered on the American Dreams album, it made us stop and think,” Rob says. “In fact, we were writing new songs as we recorded American Dreams, so some of the tracks like ‘Younger Days’ were already being formed at that time. I have an affinity for things that have an arc, so it made sense to have a trilogy of albums that could be connected. If you look at the artwork for the three albums you will see that they form a continuous piece of art (thanks to our artist-designer Corey Johson.)”

The overarching concept for the three albums encompasses a message of “equality, diversity, and unity for all,” Rob notes. “We have plans to create a musical based on the compositions of the three albums and already have a concept in mind.”

Rob grew up in Detroit, Michigan, a gay Asian man in a place where neither was common. “When I was 14 years old, I did covers of the song “Rebel, Rebel.” It had a certain effect on me, growing up in Detroit during the time when the song came out and being gay in that day and age (but not out). David Bowie was there in front of everyone, in broad daylight, clearly gay representing a gay ethos, but no one cared since he was doing glam rock. That made me want to perform at a young age where I could perhaps hide in a musical persona. Now fast forward decades later, as a proud LGBTQ+ artist writing for Hemisphere… well, that’s some progress.”

Rob is also a director with the San Diego Japanese American Citizens League (JACL). “I’ve been able to connect folks that have a shared experience with me, and that want to broadly support diversity and equality for all Americans.” His work in the LGBTQ+ community is also top of mind. “I think that the younger generation of the LGBTQ+ community can learn from history,” he notes. “There have been a lot of battles fought for the rights that sometimes we all take for granted, especially in our community. We also need to make sure that young or old, we work together with respect for the goals to advance equality and diversity in America. In working with the JACL, we have taken the task to network with other marginalized communities so we can all work together to advance our common goals and be heard together. There is strength in numbers!” 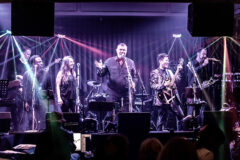 The origins of Hemisphere date back to 1994 when Rob recorded his first solo album, River of Life. He was nominated for a San Diego Music Award and needed to start performing live, but there was one problem: the entire album had been recorded by himself. Like so many good things that started in the ’90s in San Diego, the origins of the full band began at Bourbon Street on Park Blvd., the now-closed New Orleans-style dance-and-strong-drink bar. There he met Don Bowman, a sax man who would become a founding member of what is now Hemisphere.

“I was there in support of Kenny Ard (local New Orleans-born piano master) and I was jamming on my horn,” Don recalls. “Rob told me he had a project and asked if I would be interested in performing on it. I jumped in headfirst on both sax and auxiliary keyboards and also did some co-writing with Rob on original material.”

Bourbon Street Bar and Grill isn’t there anymore, but the initial meeting blossomed into something wonderful. Two other core musicians, drummer Mike McQuilken and keyboardist Max Zape, rounded out the original band.

Drummer Mike McQuilken met Rob in 1983 and they were actually roommates in La Jolla for a time. Mike experimented with creating his own electronic drum set using parts from old telephones. When they outgrew the home studio, they rented a space in College Grove Shopping Center and turned it into a recording studio. From this space, they released the album Structures (1985), World One World in 1988, and Information Age in 1990. “We recorded and mastered to analog tape and had a lot of gear in the studio. We would be working together almost every evening and weekend. I have many fond memories of us working in that studio together. It was a magical place,” Mike said.

As the drummer, Mike spent a good deal of time studying African rhythms and studied tabla with Miles Shrewsbery. In the early ’90s, he studied with Ginger Baker in Los Angeles, who showed him how to incorporate the African polyrhythms he’d learned into a traditional drum set.

Max Zape, the man on the keyboards, rounded out the original lineup when he joined around 1997. He’d been playing for Carnival Cruise Lines, but returned to San Diego to help with his mother, who was ill. Serendipitously, he found Hemisphere and started to work with them on the Destinations album. “The music of Hemisphere is whatever whim Rob Shinno envisions,” he says. “The musical vocabulary of the band is varied, from pop rock to jazz and adult alternative, as well as ambient and smooth jazz. It also helps that the music community of San Diego is supportive and some of those relationships span decades.”

“To be honest, coming back to Hemisphere after a long break to record American Dreams and Unity was like coming to a familiar place with good friends who genuinely like each other. Friendship is real, and the vocabulary we have in the recording process is quick,” he said.

The band recorded the album largely with Peter Sprague, world-renowned guitarist, whose expert ear and recording savvy is evident on the albums. According to Max, “We know when we’re on the right track when Peter Sprague gives us the knowing nod that he likes the vibe. Peter is our Yoda, the voice of reason.”

A Walk with Mary

Albert Cummings Is Good with his Hands