January 2023
Vol. 22, No. 4
Gypsy Jazz, Blues, Swing, and a Whole Lot More With the Garners by Paul HomiczJuly 2019
Back with a Bang! Java Joe's Reunion at San Diego Folk Heritage by J.T. MoringJuly 2019
Book Review: The Philosophy of Modern Song by Bob Dylan by Ted BurkeJuly 2019
Rick Nash: Bass Man in Demand by Wayne RikerJuly 2019
If Music Be the Food of Love, Play On: Dually Noted Pairs Fine Food and Fine Music by Paul HomiczJuly 2019
Mod Revivalists the Trebels to Reunite for 40th Anniversary Show by Jim TrageserJuly 2019
Harold in the Land of Jazz by Bart MendozaJuly 2019
Sephardic Dance and Music by Yale StromJuly 2019
Loretta Lynn: A Special Tribute to the Queen of Honky Tonk by Terry Paul RolandJuly 2019
Ben Grace Gilmore: It's All About Building Community by Sandé LollisJuly 2019
Advertisements 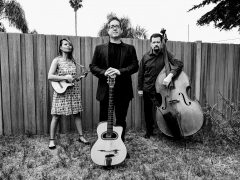 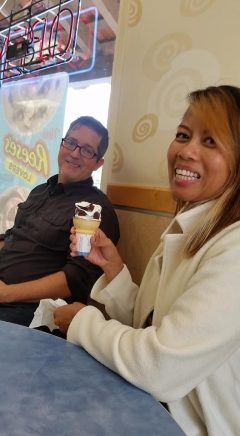 Jon Garner sits back in his chair. “Cowboy, bebop, Gypsy crawl, that’s us. That’s what is says on our website.” He speaks a bit on the slow side, as though he were explaining a chemical formula to a student.

Lorelei Garner chimes in, her brown eyes lighting up as she speaks. “We’re not contented to one thing. We just can’t do one genre of music, because we love the different genres so much. That’s how we play.”

Lorelei and Jon Garner are the husband wife musical team that is lighting up San Diego’s music scene with their particular brand of musical verve. And, as they explain, it is impossible to pigeonhole these performers into a genre or style. As a music writer, we often rely on shopworn terms and phrases—potpourri, eclectic spicy mix, etc.—that fall short when it comes to the Garners. Whereas bands might describe themselves as Armenian punk surf music, or countrybilly emo Latin jazz, where they mix up a dozen types of music for all their tunes, the Garners like to do a dozen different things from tune to tune.

At a recent performance by the Garners at Bar Pink, what I experienced will give you an idea of what this duo (sometimes trio) is all about. As I arrived at the North Park nightspot, a steady stream of folks made it through the door, and the micro-booths filled up pretty quickly. It was a mixed crowd: young, old, and in between. I recognized a bunch of folks from the local swing dance community. The pool table was quite active, and I took my position at the bar to be tempted by one of the 1.24 x 1018 microbrews available here in San Diego.

The Garners’ set began with “Douche Ambiance,” a classic Django Reinhardt tune and one of the most authentic Gypsy jazz standards. Jon plays a Selmer Maccaferri-style guitar, with the small sound hole and wide bridge, the kind that Reinhardt favored, and with its clear bright sound, the timbre is pure Gypsy jazz.

There is the swing, the bump-chuck, bump-chuck, so strong in Gypsy swing, and Jon’s solo has that Django Reinhardt Gypsy flair. This is Gypsy jazz. But Lorelei strums a ukulele, an instrument that was probably never seen around any Gypsy camp or been used at a Gypsy jazz festival.

The next tune was a bouncy rendition of “Boogie-Woogie Bugle Boy,” the World War II hit by the Lennon Sisters. The feel is more akin to what was on these shores decades ago. And the guitar solo is straight-ahead swing and jazz, with little trace of Reinhardt.

Soloing on almost every tune, not something bass players sign up for when they go to bass-playing school is Paul Tillery, the bassist they most rely on when the Garners perform as a trio.

The rest of the night was similarly unpredictable. There were songs that came out more country, with Jon laying out lines similar to what Don Rich had done standing next to Buck Owens. Then came a blues tune. As dancers danced, the rest of the evening was filled with more swing, more Django, some western swing, and a few surprises.

Days later I spent some time with Jon and Lorelei at their home. They direct me to their music room. Its spaciousness reminds me of some recording studios I’ve been in, with a couple of pianos and lots of sheet music resting on music stands. Guitar cases lay about as well. What distinguishes this from other music places I’ve been is a very large, curious, and friendly black cat. Jon sits back in his chair, resting his arms at his sides. Lorelei sits on a small chair facing me.

All these genres that the Garners mine go back a ways, way back to the 20th century; yet the pulse is anything but old-fashioned. “We’re not retro,” Jon explains. The music we do is still relevant. It’s grooving. And for young people these days, it’s a reaction to the machine culture. They seek out what’s more authentic.”

Jon started out as a punk rocker, at home with power chords played four to the measure and driven through amplifiers as loud as B-29 bombers. When he was around 15 or 16, a friend, a trombone player, lent him a Pat Metheny tape. “What the hell are they doing?” was his first reaction when he heard those minor seven flat five chords and polychord harmonies.

Before going off to school, Jon would tune his radio to the local college station, a progressive broadcaster whose playlist included some great jazz, and turn on the tape recorder. “I’d come home and see what I’d got,” Jon says. The Springfield, Massachusetts native threw himself into learning jazz, learning the phrases and inflections of the great jazz masters, particularly Lester Young. He majored in music and the University of Massachusetts and completed his master’s degree at San Diego State.

Lorelei swings and scats with the best of them, so it might be a surprise to learn that jazz came to her after she and Jon met. “I grew up very serious about church music,” the San Diego native says. “I had piano lessons, and I was really in love with musical theatre.” Among the productions Lorelei loved or was involved with were Phantom of the Opera, Singing in the Rain, and The Music Man.

The husband and wife team met through music, having music studios in the same building. Lorelei came to a few of Jon’s gigs, and as love will have it, one thing led to another. A musical turning point came when Jon invited Lorelei to sing a number or two with him. “Afterward Jon told me, ‘If you want to sing with me, you can’t sing like that!’”

The soprano, who had honed her skills singing parts in Oklahoma and The Sound of Music, lacked the phrasing of jazz singers, the way they will swing things a bit or sing phrases behind the beat. She was soon listening to Billie Holiday and other great jazz singers. “I fell in love with it,” Lorelei says. “I felt like I never could engage my voice the way I wanted it to, the way I could when I’m singing jazz.”

Lorelei currently supplies the ukulele backup but is working on guitar to give a fuller sound to the rhythm when the Garners perform as a duo. Jon and Lorelei are also working on incorporating more harmony vocals. “I’ve fronted bands for years, and as a lead singer you can take the vocal wherever you want,” Jon says. “You can’t do that when you’re doing harmonies. And when you’re doing harmonies your note has to be smaller.” Despite her extensive classical vocal training and work in musical theatre, Lorelei also has to rethink her approach to harmony when she’s singing in a jazz duo. “As a soprano, I always sang the melody, I have to think differently now,” she says.

As was mentioned above, the bassist most often contributing the bottom end for the Garners is Paul Tillery. Jon and Paul have known each other since they were both students at SDSU. “I had been doing a lot of solo guitar gigs, and I’d gotten used to just doing things any way I wanted,” Jon says. “If I wanted to modulate to another key or change the feel of the tune, I’d just do it. Well, I called Paul in to play as a duo, and when I’d try these things, he was right there with me.”

Tillery does not shy away from a challenge and enjoys the distinctiveness of performing with the Garners. He explains, “First, there are a lot of chord changes that are different from regular jazz. I also like the lighter swing feel and the art form in general. And I like the trio setting of the band.”

There was a time when record LPs and compact disks and even cassettes dominated the thinking of musicians when it came to releasing music. Songs were written and arranged, studio time was booked, a bunch of tunes were recorded, and then the record company or musician released the package to the world. The Garners are taking a different approach, releasing a tune at a time.

With their new releases, Jon and Lorelei will be busy for quite some time. “We have a lot of tunes written,” Jon says. And the couple believes that folks will eagerly check out their streaming or downloading or however music is distributed these days. “Our music is smart but not pretentious,” Jon says. “It will make you feel good.”

Spend a Dog Day Afternoon at a Free Concert Showcase