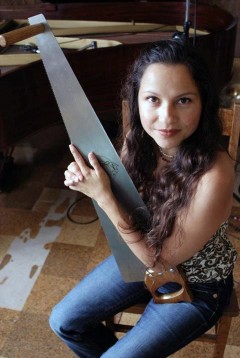 “I am a sawist, absolutely,” says Bianca Lara. Images of lumberjacks felling trees and carpenters slicing two-by-fours aside, Lara, a petite brunette, explains that just as there are pianists who play the piano and cellists who play the cello, sawists play the saw.

Yes, sawists play the saw. They make music with them.

Proving that this humble carpenter’s staple can evoke tones and tunes, Lara stands the handle of a saw against her leg and bends the blade into a sans serif S shaped curve. With a little rosin, actually a lot of rosin, she sweeps a bow across the blade as though it were a string of a violin. A haunting sound with loads of vibrato emerges, one that might be described as a cross between Yma Sumac and the soundtrack to The Day the Earth Stood Still. Admitting to its otherworldly sound, Lara says, “Yes, the saw is sort of the analog version of the Theremin.”

A preschool teacher by day, Lara is the sawist, as well as the vocalist, for Gypsy Groove, one of the newest Gypsy jazz ensembles in southern California. The band performs often in San Clemente, Oceanside, and Leucadia. “We started out as a Gypsy jazz jam in North County,” says Lara. “Just a lot of folks coming around to sit in and hang out and play Gypsy jazz.” The jam earned the moniker Gypsy Lube. Once they had more formally established themselves as a band and started playing publicly, Lara insisted on a name change, to Gypsy Groove, as she did not want the band to be confused with Jiffy Lube or other automotive oil change establishments.

Playing a large bodied guitar similar to the one played by Django Reinhardt, the guitarist whose music and fiery technique inspires the genre of Gypsy jazz, Jeffery P. Ross produces exceptionally crisp licks and lines, as well as the striking timbres, reminiscent of Reinhardt. Besides being a Gypsy jazz hotshot, Ross is also a top-notch performer of blues, country, and rockabilly. He has performed with the Hellcasters, spent some time around the Austin scene, and toured with the Bellamy Brothers.

Lara and Ross met at a blues jam. “I thought he was just a blues guy, a three-chord player, but he had a Django sticker on his guitar, so we started talking about Django. And it turned out that he’s a huge player when it comes to Django,” she says. Lara and Ross called up a few friends and put the word out that they were playing Reinhardt’s music, and the North County Gypsy Lube was born.

The band’s bassist moved on. Rather than replace him with another string bass player, which is the instrument usually chosen to hold down the bottom in Gypsy jazz, Gypsy Groove enlisted Bay Area transplant Tim Griffin on tuba. Many of the band’s arrangements come from guitarist Aaron Streate. Lara says, “It’s great having both Jeff and Aaron in the band. Their tone and note selections are quite different, but they are equally skilled musicians.” Cindy Nunag performs the violin in the ensemble, sometimes harmonizing her instrument with Lara’s saw.

Classical violin was Lara’s first instrument, which she started playing when she was eight or nine. While she was in fourth grade her family moved briefly to the Bay Area. Playing in the school orchestra, the music director included her in the school’s marching band. Lara laughs as she remembers being the only string player amid a sea of trumpets, saxophones, and tubas marching in parades and across football fields. “I was probably the only kid ever to play violin in a marching band, but wherever the band marched, I was there,” she says.

As a teen, her interest in the violin waned. But that great and joyous adolescent rite of passage, discovering your father’s CD collection, opened up the great vista of Gypsy jazz for Lara. “My dad had a lot of guitar CDs,” she says. “I played almost all of them, but when I played a disk of Django Reinhardt it was like a lighting bolt. I thought, ‘This is what I want to do, to make music like this.’” Lara started singing and hit the Los Angeles Gypsy jazz scene in 2000. Among the groups that she performed with was Swing Finger, a band that included the noteworthy Gypsy jazz guitarist Gonzalo Bergara.

“I believe that everyone in a band should play an instrument, even the singer,” says Lara. “But by the time I was thinking of taking up an instrument for the band, I realized that there were so many jazz violinists that I should play something else. It was Jeff to suggest that I switch to the saw.”

No one knows who the first person was to take a violin bow to the edge of a saw, but the practice has been around for generations. While it has not been a greatly popular instrument in recent times (A review of number one songs over the last 30 years that featured a musical saw yielded zero results.), the saw was at least a bit more common a few decades ago, with saw players earning spots on “Ted Mack’s Amateur Hour” and even prime time spots on “The Ed Sullivan Show.” Currently Lara believes that she holds a lonely distinction in the Gypsy jazz world. “I think I may be the only person playing saw in this type of music,” she says.

Lara plays a baritone as well as a tenor saw, the larger and longer of the two instruments producing the lower range. She says that any saw found at any hardware store can produce musical tones and can be played as an instrument. “I also have a custom-made saw, a custom-made instrument made by this man in France, Alexis Faucomprez. He calls his instruments scie musicales,” she adds. The Faucomprez saws have a metal blade and a handle, but there the similarities to an Ace Hardware saw end. The scie musicale blade is not angled. Faucomprez also includes a second handle at the blade’s end to facilitate its musical adaptation. Most conspicuously, for the safety and comfort of the sawist, the scie musicale has no teeth. “The tone and range are different as well,” says Lara. “My saw also has a cherry handle and F holes. Anybody who is serious about playing the saw has one of these Faucomprez instruments.”

Lara is almost completely self-taught on the saw. “There are a number of instructional materials on-line,” she says. “At first, instead of a bow, you start out with a spoon, striking the blade and trying to get a consistent tone. I’ve been at this for about two years now, and I spent at least a year just working the saw with a spoon.” Taking advantage of its shorter length, Lara uses a child-sized cello bow on her saw. It also has unbleached (black) horsehair. “And with a saw you use a lot of rosin. A lot,” she says. “The saw can be a very dirty instrument to play.”

“It’s interesting when we play. The saw produces a sound very close to a woman’s voice. Often, when I’m playing, the chefs will peek out from the kitchen to see if it’s me singing,” she says.

Besides singing and playing the saw, Lara has taken up the maracas, confessing, “it’s difficult to keep those Latin rhythms going and sing at the same time.” She also plays a small tambourine and a resonator steel ukulele. “I try to keep the rhythm going and play as solidly as the original Gypsy players. It’s good for some of the smaller venues when we have to pare down the band.”

This fall Gypsy Groove is planning a Kickstarter campaign to raise funds to produce a well-polished CD. They also anticipate more gigs around San Diego. “I just love playing this music,” says Lara. “There is so much going on with Django. There is the Djangofest every year in his honor. And there is so much enthusiasm for his music. It’s accessible and listenable, and it’s all about passion and feeling.”

For more info and where you can see the band live, go to: www.gyspygroove.net

The Cosmopolitan Hotel: A Full Calendar of Music in Old Town