July 2022
Vol. 21, No. 10
Getting to Know Lisa Sanders by Lisa M. CroweJanuary, 2013
The Return of IPO San Diego: After a Five-Year Local Hiatus, David Bash’s Unique Music Festival Makes a Much-Anticipated Return by Scott SamuelsJanuary, 2013
This Saw Is Not a Tool by Derek ShawJanuary, 2013
Our Redneck Poet, Merle Haggard by Mark PulliamJanuary, 2013
Linda Hoover: I Mean to Shine by Jon KanisJanuary, 2013
Tom Griesgraber: Now a Member of the California Guitar Trio by Paul HomiczJanuary, 2013
The San Diego International Fringe Festival is Back! by Laura PrebleJanuary, 2013
Mary Chapin Carpenter: We Remember Moments Not Days by Terry Paul RolandJanuary, 2013
Judy Henske: A Remembrance by Barry AlfonsoJanuary, 2013
KIDS THESE DAYS: Christone “Kingfish” Ingram, Eurovision, and the Aftermath of the Y2K Baby Boom by Raul SandelinJanuary, 2013
Advertisements 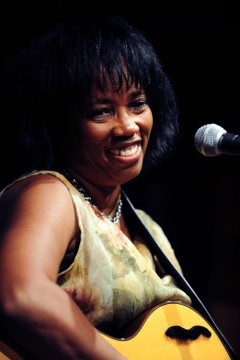 “I’m very satisfied when I sing, because I know it makes a difference.” Those are the words of Lisa Sanders, songwriter, vocalist, and musician. I had the pleasure of interviewing Sanders last month at Lestat’s, a cozy traditional European-style coffee house with an emphasis on supporting live entertainment in San Diego. Sanders has performed there many times, so it’s a familiar place. We ordered refreshments, located a quiet spot, got comfortable, and began to chat…

Sanders reminisced; she was born in Philadelphia but raised in a small California country town… She grew up listening to great singers like Nat King Cole and Ella Fitzgerald and some jazz and country music in general. She also enjoyed watching television shows like “Hee Haw” and Lawrence Welk as a child, which are significant musical influences. She currently resides here in San Diego and has become a local celebrity. Sanders won a Reader Poll Best Acoustic Artist Award, she’s a two-time San Diego Music Award winner, and is also a National Women Living Legacy Association award winner! She performs often in San Diego and in venues throughout the U.S.

Sander’s music has been dubbed “country soul.” Her guitar playing’s soulful style and poetic flair is excitingly eclectic with a subtle enticing tease. Her melodic warm voice embraces the heart of listeners as she delivers a country edge that captivates audiences everywhere she performs. So, when I asked Sanders, “How would you categorize your music?” her response seemed remote as she conveyed to me her belief that music is universal; she feels it’s a global language, a multi-cultural experience. She said, “I sing for everyone. God gave me a gift — my music, my voice; it moves people when I sing, and it isn’t confined to any particular category.”

Our candid conversation flowed effortlessly. I suppose we might have appeared to be close friends as we chatted and giggled sporadically, with nods of mutual approval during moments of insightful dialogue. So, I captured the opportunity to ask Sanders if ever she felt disillusioned concerning her career aspirations and, surprisingly without hesitation, she shared brief glimpses of her past… I surmised that she has experienced many disappointing and difficult challenges throughout her life time, personally and professionally. She said, “I’ve hit the wall a few times.” I asked, “How did you get through it, hitting the wall?” She responded, “Eventually, I pulled myself up by my boot straps, because I felt I had a spiritual calling to sing.”

Consequently, the many challenges of life has caused Sanders to become exceptionally resilient and resourceful, as she refuses to give up. She shared, “I’ve thought about quitting the business a few times, but I won’t quit, I can’t quit, I’m not a quitter.” Her courage is apparent, as it’s channeled through smooth confident vocals that consistently deliver emotionally compelling music without apology time and time again.

There’s no doubt that Sanders connects well with her fans, as she’s most engaging on stage! I asked her, “When did you know you wanted to be a professional singer?” And she replied, “I’m a songwriter first; singing is a vehicle to deliver my songs, you know, the message. I’m very satisfied when I sing, because I know it makes a difference.”

She then shared several experiences involving fans who have approached her with heartfelt appreciative thoughts of how her music has brought them great joy and/or how it’s helped them through difficult times. She says it’s those special moments with her fans, in addition to the love and support of her family and friends, that inspire her in times of doubt. She said, “Our relationship is reciprocal.”

I asked Sanders, “What’s your formula for maintaining your connection with your fan base?” She replied thoughtfully, “Authenticity.” Lisa Sanders is indeed authentic, as she’s an accomplished writer, singer, and musician on the acoustic guitar. Her sultry, melodic sound intrigues her audiences as she inspires, encourages, and embraces her listeners with her original tunes. She says, “My fans know that I’m sincere; I care about them and I care about my writing, the message, the music.” I then asked, “Is there anything you’d like to tell your fans?” She nodded yes and softly responded, “I’m very appreciative of their continued support and love for my music.”

Sanders has recorded six full-length albums with some of the world’s most renowned and respected studio and live musicians. Her recordings are available for purchase at lisasandersonline.com, cdbaby.com, and reverbnation.com. Sanders is currently working on a new CD and tour (untitled at this time), tentatively scheduled for release sometime in 2013!

Lisa Sanders, will no doubt continue to render the world a fascinating and most enjoyable musical experience, as Sanders has a way of rendering her listeners an intimate sense of openness for musically stimulating emotional exchange.

Jefferson Jay: Making the World a Better Place One Song at a Time

Gospel: From Africa to the Rest of the World, the Sound of Joy and Hope