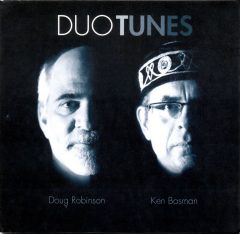 It is at times like these that I’m extremely glad that I did not follow the advice of Ms. Kemmer, my high school guidance counselor, that I did not go to med school and become a doctor, that law school and becoming a lawyer was left out of the picture for me, that I did not become a teacher or aircraft engineer, that I followed my heart and became the best thing possible: a music critic and reviewer of CDs, because right now I am celebrating one of the best moments in the life of a CD reviewer, and that is having in my CD player one of the most joyously creative disks I’ve had the pleasure to listen to, let alone review, in a long, long time.

That disk is Duotunes, a collaboration between pianist Doug Robinson and Ken Basman. Basman was a talented straight ahead/bop guitarist in the mold of Joe Pass, fluidly playing some great musical ideas. Sadly, we learn from the CD liner notes that Basman passed away in June of last year. We are lucky and thankful to have this disk as part of his musical
legacy.

Robinson is a jazz pianist who is uninhibited by traditional approaches, most notably in his use (or nonuse) of his left hand. Unlike many jazz pianists, he doesn’t feel obligated to always have his left hand holding down a chord. He thus leaves a lot of space for his right hand to fill up. He doesn’t abandon the bass clef. On the contrary, he realizes that a lot of music can happen below middle C and is unafraid to take the melody or improvisation way, way down to the left side of the piano.

Okay, two great musicians, but the thing that makes this recording so exciting, the real star of the show here, is the interplay between the Robinson and Basman. Particularly on the duo performances without bass and drums, such as “Turkey in the Straw” and the Beatles’ “Come Together,” the two eschew the traditional form of a single performer soloing while the other musician or musicians back him up. The pianist and guitarist merge and meld solos in something of a jazz masala. The moment-by-moment intuitive interplay is thrilling.

About half of the CD was culled from impromptu live recordings, with a couple of the selections suffering from limited fidelity. Drummer Victor Monterrubio and bassist Antonio Lozoya join Basman and Robinson on a few of these live recordings, reprising two of the previous duo selections, Pat Metheny’s “Soul Cowboy” and Robinson’s “Aldama Mama.” The band cooks.

Duotunes receives six bonus points for having 12 tunes that amount to more than an hour of music. I’ve never given out bonus points for CD covers, but this time I give one bonus point for the Meet the Beatles homage cover photography. I loved it. If you’re interested in some unpretentious, refreshing innovation in jazz, you have to check out Duotunes.