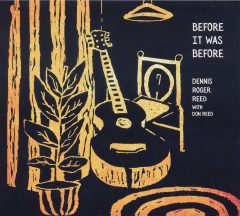 Local singer-songwriter hero, Dennis Roger Reed, has built a four-album series of American roots songs that covers the landscape of a varied genre that is hard to pin down in a way that is cohesive. Since 1998, he has taken us on a road trip through history, crossing the borders among folk, rock, jazz, country, and blues. The timeline roughly begins during the early stage of Americana music movement that included Reed’s friends and heroes, such as Steve Earle, Peter Case, and the Desert Rose Band. When the movement became a commercially established music category and moved to Nashville to be tamed, Reed kept exploring the roots of American music, mixing interpretations and originals into a series that plays like Nitty Gritty Dirt Bands’ early Uncle Charlie album in concept and execution. 2018’s Before It Was Before is the newest edition to Reed’s series of American songs-original and skilled interpretations.

To experience the Before It Was Before fully, a good sit-down-and-listen time should be spent with his first three releases: Little King of Dreams (1998), Cowboy Blues (2004), and Songs About Tractors and Stuff (2014) with Tim Horrigan. It is a front-porch album with a warmth that threads a diverse series of songs together into an enjoyable tapestry of American roots music. It has the feel of Reed’s own meditation on the music that has shaped his life and the lives of most of his listeners. In a diverse anthological fashion it aptly sums up the work Reed has done over the last 30 years. In that sense, this 21-song record ties together the past with the present.

The album’s instrumental flare is driven by brother Don Reed whose music weaves through every track with some fine dobro and strings, along with backing vocals. His fiddle on the instrumental “Corrina” serves as fitting bookends for the song-cycle that spans three decades. Reed’s vulnerability on “If Not For You,” gives some added depth to the familiar Dylan song. “Jesus Is on the Mainline” is a fine tribute to gospel quartets of the deep south and Ry Cooder, who covered the song early in his career. Other standouts include “Up to Now,” “Big Sister,” “Cuckoo,” and the beautifully vulnerable and sincere song “Reconciliation.”

Most striking about this album is how well Reed’s original stand alongside the skilled interpretations of classic songs. Before It Was Before is solid place to start if this is your first listen to Dennis Roger Reed. But, if you’re already initiated, it’s like walking into a familiar room warmed by a friendly musical fire.