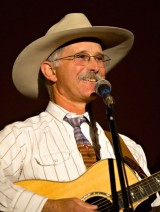 Dave Stamey represents a rare breed. Some think, like the genre of cowboy music itself, it’s a dying breed. He’s a singer-songwriter who also happens to be a cowboy and writes about what he knows. Born in Montana and raised in the ranch country of central California, he’s writes mostly original songs that sound like they could’ve been carved out of the side of some long lost California gold mine or in the ruins of the saloon in the famous ghost town of Bodie. He sings from the heart with a voice that echoes many of his heroes like Bob Nolan and Ian Tyson. But, it’s the presence he brings to his songs and the music that makes it real today. There’s no effort in the way he carries his cowboy culture; it’s just as real and American as the fields and ranches where he was raised. With his latest release, 12 Mile Highway, he continues to forge his legacy out ready to be appreciated by his loyal fans and discovered by folks new to the genre. If you thought Sons of the Pioneers said it all, think again. Davey Stamey still has a lot to say and to offer today’s often saccharine country music culture…

San Diego Troubadour: How did you get started in cowboy music?
Dave Stamey: I had no connection with mainstream country music. It just didn’t feel real to me. I’m a songwriter and I needed to write about what I know. Being a cowboy, I naturally drifted into what I know.

SDT: I was in Nashville a few months ago and had the pleasure of meeting Michael Martin Murphy. He had a lot of insight about cowboy music.
DS: He’s a large influence on the genre. He’s done a tremendous amount for this music along with folks like Ian Tyson. It’s to the point where being a solo cowboy performer is as close as you can get to being a troubadour. We tell the story of what it’s like to be a cowboy in the modern world.

SDT: Where are you from?
DS: I’m originally from Montana. I grew up in the ranching business. I was raised on the central California coast, the area south of Paso Robles around San Luis Obispo. I later started getting into packing mules for trail rides up round Bishop and Mammoth Lakes for a number of years. I’d take tourists into the back country with horses and mules. We do the same now. We do trips on trips into the Sierras.

SDT: I read that you have a trip planned to Bodie.
DS: Yeah. We do that trip once a year. I’ve got a small ranch in the foothills southeast of Fresno. But, I’m on the road at least 150 days a year.

SDT: What do you believe is the future for this art form…cowboy songs, poetry, storytelling?
DS: I can’t speak for the genre as a whole. I can say I’m heavily booked for the next year. I have bookings into 2013. That speaks to the fact that, like any business, it’s based on relationships we’ve developed over the years. I’ve been playing all over the western United States. Everything looks very promising for the next few years.

SDT: Why do you think people today respond to cowboy music and lifestyle?
DS: I think it speaks to two things: One, we live in a complicated world and people just get tired of it. Two, cowboy culture and especially the music and the art present simplicity….a simpler life style that causes people to gravitate toward that.

SDT: Do you think the public is hungry for a cowboy hero?
DS: I don’t know if there’s really a need for a cowboy hero today. I think it’s really more about the simpler lifestyle that appeals to folks. If you look at the media that celebrate urban culture, like the reality shows, they’re mean-spirited. The western lifestyle presents something warmer and more positive. They’re craving this, a connection to earthier things. I have the good fortune of appealing to the authentic ranching culture who tell me I sing about their lives. I have an incredible fan base. It’s a deep niche.

SDT: These are the folks who are helping to keep cowboy music alive as opposed to Nashville.
DS: A lot of what comes out of Nashville is over produced and formula. i don’t want to belittle what they do, but they write to their demographic. I understand that, but it doesn’t leave a lot of room for real people.

SDT: Are there any promising new artists in the cowboy genre today?
DS: Yes. There are a few. Carin Marie and the Pony Express are really good. She’s 19 and probably the finest female western performer out there now. She’s a great singer-songwriter and has a great deal of integrity. She’s not looking to be the next Taylor Swift. There’s also a gal out of Williams, California named Adrian Brannan. She also goes by the name, Adrian Buckaroo Girl. She’s 18 or 19 and writes all of her own music. It’s very centered on the buckaroo lifestyle. She’s the real deal. So, there’s some good stuff happening, but not as many kids as those who want to be Taylor Swift. But I see them out there and they get it. What bothers me is the audience is getting older and there aren’t a lot of younger audience members. I do see a big trend toward singer-songwriters as opposed to Sons of the Pioneers types of vocal groups.

SDT: Who are your influences?
DS: Marty Robbins was a fine cowboy singer. Also Ian Tyson. Burl Ives was a big influence on me even though he was a folk singer. Cowboy music is really considered folk music, but we’ve been disowned by most of the folk music world. As a writer my biggest influence is Steinbeck.

SDT: That would make sense, cowboy music being about the story and all.
DS: Yes. That’s really the difference in this kind of music. It’s a storytelling genre. These songs all tell stories. People like stories because they cut deep. You know, it all goes back to something primal. If you want to get that deep, it goes back to us all being in caves. So, we carry on with the cowboy songs. We don’t really any plan or idea where it’s all going, but we keep on.

SDT: Isn’t that what being in the West is all about?
DS: Yes! Exactly.

Whitney Shay: A Passion for the Stage