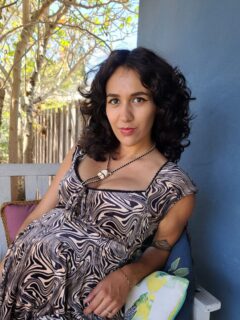 It’s hot. It’s August, and San Diego is unseasonably warm and humid and definitely not the place for a pregnant woman to be trying to create original music. But Dani Bell is doing it, has been doing it, and will most likely continue to do it in the future, well past her baby’s first birthday. Probably in a painted cat mask and black tights with a guitar across her slight body. This is because she is a creator of things, of beauty, of life.

Listening to Dani’s music is a bit like playing a guessing game. Who does she sound like? Her songs and vocals are at once familiar but unique to her. She cites David Bowie as a primary inspiration, but there are so many more colors to what she creates. There’s a tinge of Elle King’s softer stuff in her vocals; there’s a brightness shining over dark lyrics like Shirley Manson of Garbage fame. There’s even a little bit of a late-days Beatles and Across the Universe in her song “Tension.” In her softer, more intimate vocal moments she reminds me of Sophie Barker, a vocalist who performs often with the band Zero 7, or Portishead. 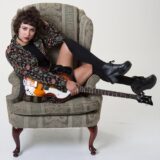 Dani Bell in 2014 from the “Chair Sessions” by John Hancock.

This is all to say that Dani Bell doesn’t really sound like anyone else. Pre-Covid, she was involved in several music projects, chiefly Dani Bell and the Tarantist. She was also part of Boychick, formed in 2014 and self-described as having a “groovy ’70s vibe.” She has also been part of Baby Bushka, the theatrical Kate Bush experience featuring eight incredibly talented women. Her projects share musical DNA, but one is not like the other.

It’s fitting that Dani is a chameleon when it comes to music. She can fit into whatever vibe a band is going for, but she has her own signature style in her own original work. But since it’s currently really hot and she’s going to have a baby, her creative energies are being directed elsewhere at the moment.

“So far I feel like I’ve been pretty worthless in the creative sense,” she says. “I’m just so tired, and it’s too hot. I’ve also been busy preparing the house for a new person, catching up on cleaning and what not. I’ve had a chance to sit and play some guitar or work on a few covers every once in a while, so I’ve really enjoyed when I have the energy to do that.” But with such great amounts of energy, Dani finds inspiration all around her. “It really could be anything; sometimes I’ll see something that sparks inspiration, other times I could just be sitting thinking to myself and come up a little idea that sparks something.”

Dani’s father was a worship leader at a church, so when she was four or five years old, she got to stand on the stage with her dad as he performed. She was given an unplugged microphone, but when she saw how many people were watching her, she says she got very nervous and embarrassed, so she didn’t consider performing until much later in life. “I’ve always loved writing songs, but I rarely shared them with anyone outside of my close-knit circle of friends,” she notes.

Curious about what a “tarantist” might be and priding myself on word-nerd knowledge, I had to look it up. According to the dictionary, tarantism is “a mania characterized by an uncontrollable impulse to dance, especially as prevalent in southern Italy from the 15th to the 17th century, popularly attributed to the bite of the tarantella.” Therefore, a Tarantist must be a person who is seized by this impulse to dance, either in Italy or elsewhere. While I am reasonably sure that neither Dani Bell nor her bandmates have been bitten by spiders, the urge to move and create and be a bit wild may be the metaphorical equivalent.

Certainly, Dani Bell and the Tarantist strive for an air of mystery. The band performs and records sessions wearing Commedia Dell’arte masks reminiscent of Italy, the home of that broad form of comic, physical acting. Another outlet for her immense creativity: Dani creates the masks herself. “I just love dressing up, and I love making things fun and interesting (even if it’s just for me) when I can. I think it’s also a way to exercise my other creative interests too.”

Dani dons a black and gold feline or deer half-mask that transforms her from alt singer to mysterious celebrant of all things creative. In a recent video, her drummer keeps the beat while wearing something like a bird beak or a plague doctor’s long conical nose piece, also black and gold. Whether it was prescient or it’s a response to the current plagues visiting humankind, that too is a mystery left to the audience to interpret. For a cinematic glimpse of this in action, check out the video for Mystery, a slow-paced alt rock gem from the 2019 Wide Eyed album. https://youtu.be/TBo_9hMxXas. Fun fact: the cover art was designed by a member of alt pop band Portugal. The Man, with whom they seem to share some musical DNA.

Reviews for Dani’s work have been universally good. “Dani Bell and the Tarantist capture a vibe that jaunts seamlessly between genres,” according to 1063 Radio Lafayette in Louisiana. “It’s a sonic journey where the light at the end of the tunnel is not quite as important as the tunnel itself.” 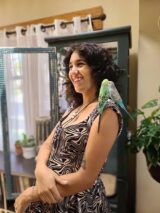 Dani at home with her birds. Photo by Julia Hall McMahon.

While described as “an American rock band,” by Pavement PR, that seems a reductive title since Dani’s original music pulls from so many different influences. It’s rock, certainly, with echoing guitar sounds, bright beats, and ear-catching melodies. The band self identifies as “inspired by early Motown, a modern style of dreamy, psychedelic pop.” As part of the Redwoods Music label, she joins a stable of creatives like Alfred Howard, a lyricist for many of the tunes and an artistic powerhouse in his own right, and Rebecca Jade, another of San Diego’s powerhouse vocal goddesses.

In addition to Dani Bell and the Tarantist, a big part of Dani’s performing life has been as a member of Baby Bushka, a San Diego-based, all-female performance group that does a memorable and emotional show around the music of Kate Bush. The death of co-founder Nina Deering devastated the group in 2020. While Dani was a large part of the band, she will not be part of it going forward.

“Now with a baby coming, I just don’t think I’ll have the time or energy to spend on that project,” she says. “I’d like to focus more on my own music, and of course, raising a human.”

The Bushies, as they affectionately call themselves, were a big part of Dani’s life for several years. “Baby Bushka was an amazing experience for me. Each of those women are so immensely talented and such amazing people. I feel very fortunate to have been a part of that project. Natasha Kozaily is the mastermind behind it all, and she’s wildly inspiring.”

Being part of something that she didn’t create was a different experience for Dani. “Everyone in that band put in a lot of time and energy to make it what it is. I’ve learned a lot from them. I went into that band without too much experience being in a group, especially not in a group of that size. It was great and I’ll always cherish my time with them.” 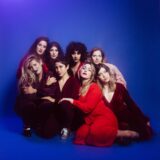 Natasha Kozaily, the founder of Baby Bushka (with Nina Deering), continues to help it evolve. But before the next incarnation, the Bushies did a UK tour this spring, and for one of the last times, performed the show that Nina and Natasha co-created. “It took a lot of energy to bring the band back together,” Natasha says from summer camp at her Kalabash School of Music and Arts in Bird Rock, near La Jolla. “We had a whole year of Patreon sponsoring, and we had to make good on those promises and commitments; we had to get new band members.”

Natasha is planning a Baby Bushka performance in December, and it will be the last time this particular theatrical piece will be performed. That doesn’t mean the Bushies are finished; she wants to create an entirely new performance piece to propel the band forward. Finishing the UK tour in the spring was an emotional endeavor. (Dani will not be performing with the Bushies in December, most likely; a new daughter is a lot of work.)

Baby Bushka recently toured the UK and Ireland, where they were received with open arms and glowing reviews. “Every night felt like that warm welcome. There were super mega fans who followed us to every show, Stuart Avon Arnold, one of Kate’s dancers for a lot of her career until 2015, he came to our show in Leeds, and Dale Palmer, who played bass on a lot of her records.” What about Kate herself? “She doesn’t do that…she’s kind of mysterious and private,” Natasha says.

“We had planned a memorial arc to perform with the band, which we performed in April, and at the Edinburgh show. It was an opportunity to honor her (Deering). It felt like going to church. When we did it for the first time in San Diego, the first time without Nina, it was really audible, the tears…you could hear in the audience. LA was the same. People connected to grief, and Nina became a symbol of loss. It was an opportunity to grieve the pandemic, and the things and people we lost.”

Although Dani was not on the UK tour, her original music shares some DNA with Kate Bush’s compositions; her songs explore the mysteries of love and human interaction, the frustration of losing yourself to the identity of another person. And despite a new human to care for, she continues to pursue her muse, in whatever form that takes.

“I plan to continue doing as much as I can musically without burning myself out,” she says. “I’ve never been a mom before, but I’ve heard it’s a full-time job. So, I’m just going to feel it out. I’d like to continue writing, recording, and eventually touring as soon as I’m able to.”

She’s already planting seeds to harvest when time and energy allow. “I have a few songs I’ve been working on with LA-based musician and producer Collin Desha, so I’m looking forward to releasing those sometime in the near future.”

Whenever these new creations take shape, Dani’s unique spin on her life experience will be a welcome addition to the local (and the global) music scene. And happy birthday to your newest muse!

NOTE: Dani welcomed her new daughter into the world on Saturday, August 13.