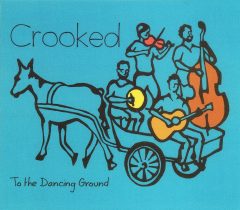 Crooked is an acoustic quartet that plays music best described as a hybrid of bluegrass, folk, Irish, and what might be called jug band without the jug. The band features Anna Levitt on fiddle; Michael Nieman on banjo, harp, and percussion (bones and bodhran); Chad Pittman on upright bass; and Nick Montemarano on tenor banjo, flute, guitars, and mandolin. All members sing, and all contributed to the writing of nine originals on their new CD, To the Dancing Ground.

The music here is a collection of ten friendly songs, several instrumental, that blend harmonies and wooden riffing drawn from traditional sources, but given a fresh spin. Some are fiddle tunes and folk songs that echo Irish and Appalachian roots–and then some that are more what you would expect from a bunch of acoustic folk players writing originals in 2016.

The lively opener is “Another Cuppa Joe,” a great song and a way of introducing the group’s sound, with Leavitt singing, it matches a catchy flute and fiddle melody with her lyrics about her family’s early days back East, enjoying the simple and good things in life, like enjoying blue jean overalls and watching people “on brand new tricycles.” “Black Whiskey Hill/Elzic’s Farewell” is a fiddle tune medley that pairs an original with a traditional reel, taking Montemorano’s guitar along through the paces; here and elsewhere, this band knows how to let these tasty toe-tappers settle in and work their magic.

The single from the disc is “Waitin’ Around for Townes,” which has thinking-person’s lyrics by Pittman as he sings a song dedicated to Townes Van Zandt about a town that has given in to despair: “Even Dylan’s been taken for the drive/This nihilistic thing that washes ghosts and their machines/Seems we’re all just waitin’ ’round to die.” It’s back to traditional feel for “The Fiddle and the Bow,” the disc highlight that Nieman sings about country folk getting together and dancing to fiddle music, done with an ear to the scales and harmonies that populate the Irish and bluegrass tunes that have come down from taverns and fairs. It is sharp and smoothly played, and the next tune, “Yorick’s Waltz,” is a stately instrumental that shows what their song about fiddle music is all about.

“Mama Put the Frango On” adds a taste of jug band sass to the set, with Leavitt at the mic and, though the band doesn’t list washboard on the artwork for this disc, it sounds like there is one being scratched to good effect. Another medley, “The Hornet’s Nest/Olives for the King,” has more yeoman work on the strings, with banjo joining as the players follow a dark minor chord exercise with a brighter major scale excursion. For good measure, the band wraps the disc with “Angeline the Baker,” a nifty traditional fiddle tune with lyrics handled by Leavitt, given a spirited reading, providing the perfect close to an album by Crooked of music that mixes old and new, doing both with smooth skill and great flair.

GRIFFIN HOUSE: So On and So Forth

DEBORA GALAN: All About Love