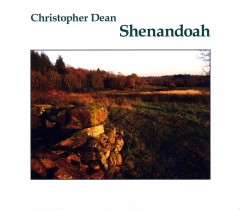 Christopher Dean has been a guitar slinger his entire life. Way back when, during the hippie days, he performed in rock bands that achieved some notoriety. Dean and his bands opened for the Doors, the Young Rascals, the Rolling Stones, and other headliner acts. A little over 30 years ago, however, he left behind the Stratocasters and Marshall amplifiers in favor of banjos and acoustic guitars.

In the early to mid-eighties he taught banjo and was a first-place winner, once for Intermediate Bluegrass Banjo and once for Advanced Bluegrass Banjo, at the bluegrass festival that is held up in Julian. For the last 20 years Dean has concentrated his efforts on the acoustic guitar, both the six and twelve-string. Following up on a number of previous CDs, Dean has released Shenandoah, a collection of instrumental interpretations of pop and folk hits from the sixties as well as American and Celtic traditional folk songs.

Dean chose well in picking the songs for this disk. All these chestnuts are great tunes with memorable melodies. He includes Tom Paxton’ sweet and mournful “The Last Thing on My Mind as well as “The Urge for Going,” Joni Mitchell’s complicated brooding on hesitant wanderlust. Other popular tunes include “If I Were a Carpenter” and Neil Diamond’s “Solitary Man.” He opens the disk with the movie theme from The Last of the Mohicans. Dean taps into traditional Celtic music with “Buachaill An Eirne.” He plays the American folk tune “Lily of the West” and, of course, the traditional song that has almost become our national hymn, “Shenandoah.”

All the tunes are performed at around the same tempo, which had my interest dropping off after the third or fourth selection. Once, when I had the CD in the disk player, a friend who used to be a massage therapist stopped by. She told me that Shenandoah is the kind of disk she would play while giving somebody a massage. Perhaps that is the intention of Dean, to create a mesmerizing sonic ambiance instead of giving us a collection of performances that contrast with one another.

Dean is obviously an able guitarist. He knows his way around a fretboard, whether it has six or twelve strings. And the guitars he has chosen to perform with are great instruments. To back him up and add to the guitars, sometimes doing way more than adding, Dean uses synthesizers to imitate the sounds of strings, flutes, and other instruments. Engineers and technicians have made great strides to make their electronic inventions sound like reeds, violas, and cellos. To me, however, they still sound way more like circuit boards and software than musical instruments. Overall, these electronics give the tunes a faux sweetness, a saccharine quality that turns these classic tunes into confections.

Christopher Dean’s new disc wound up being a little too sweet for my taste. On the other hand, Shenandoah might be what you want to listen to while you’re getting a massage.

CHRIS CARPENTER: Up All Night