Three and a half years ago, my good friend Charlie Loach (also a columnist in this magazine) and I are in my cozy little music room. We are discussing a weekly meetup as a way of keeping my hands on my guitar. The conversation has been encouraging, plus, I’m hangin’ with my buddy. Life is good.

“Why don’t we play something we both know well.” suggests Charlie.

“Cool.” I say, “How ‘bout this…” and we drop into something for a couple of minutes.

Charlie adjusts his guitar on his thigh as the last chord slowly fades away.

“Well,” he starts with a timbre that hints that he’s struggling to look on the bright side, “You’re definitely going to benefit from playing more regularly, because your playing’s pretty shitty right now.”

Your real friends tell you. Like it or not.

I’ve alluded to many of my life experiences in these pages. Knowledge and wisdom come from experience, after all. Same with humor; as Mel Brooks so eloquently put it: “Tragedy plus time equals comedy.”

Through a simple combination of luck and friendship, I have been a fly on the wall as some of music’s greatest names were interviewed by arguably one of the best music journalists ever. The most interesting thing I carried away from all of these encounters was the collective consistency and brevity of their answers to one question: “If you could travel back in time, what advice would you give to your younger self?”

Almost every one of them said exactly the same thing in the same way. There’s something to that…

Over the previous several years, my life sort of intervened upon my career plans. I stepped away from music to concentrate on raising my youngest son Miles, which included providing healthcare and child support. It’s a decision that was influenced in large part by the dearly recently departed blues and folksinger Judy Henske, who once set her career aside to concentrate fully upon raising her own daughter.

So I washed dishes for a couple years. I worked very long days as an MTS city bus driver for four more. 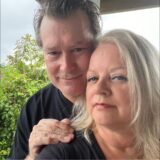 A little over a year ago I met Cookie Fortune. She told me that as a bus driver, I was a pretty good songwriter and that for the safety of all, she could show me how it was possible to return to music full-time, while continuing to meet my commitments. She did just that.

Now I have a new album coming out. I have single out. I have a gig and a great band to play it with. Tonight.

There are a lot of great reasons I can give for laying down my axe but really, I just didn’t enjoy it. Little did I realize, it was precisely because I wasn’t playing that my enthusiasm had waned. The less I played, the worse it felt and sounded the next time I did, which is not progress and not fun.

So, throughout the pandemic I didn’t write much or even play at all. I spent most of it in a depressed state, looping through traffic/Netflix/sleep/repeat.

I did continue to produce music and I shifted my off-hours focus on the music of others. I got really into watching online videos of new tools and techniques. These not only helped with learning new things, but inspired me to actually record music to try them out on in the first place.

Geza Keller put me on stage with him as a guitarist/backing vocalist following the production of his album Got Nothing to Lose, essentially throwing me into the deep end. I definitely had some memory issues having not exercised that particular muscle as much in recent years, but I was also given the opportunity to carry a lighter load as a sideman, a perspective I learned a great deal from.

Songs and recording snippets began to stack up and soon I noticed that I had at least kept up a pretty good vocal regimen. Consequently, it was more FUN to sing. So I began recording cover versions of favorite songs, which led to reviving some original songs and writing some new ones.

Which led to playing music more and eventually recording a full-length album.

Which led to me saying “yes” to a gig that came my way.

Which brings us back to “D’oh!”

I’ve got to run through the set, take a shower, and head out later to do what I most love to do.

Thank you, Charlie, Cookie, and Geza. My family. My friends.

On behalf of musicians everywhere, thank all of you supporters of music, local and otherwise.

Sven-Erik Seaholm has a new album, Oxford, Comma, to be released on October 24. The first single, “She Sends her Best,” and other full-length songs can be heard at his website www.SvenSounds.com

Time Away: The Musical That Happened Anyway