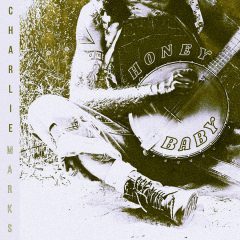 Charlie Marks has a new CD, Honey Baby, a collection of 13 traditional country blues and one original played by Marks live in the studio, just him and his banjo. This is old time music, and Marks’ presentation counts as an attempt to frame it old-fashioned style—his banjo playing is simultaneously raw and rustic and complex as he lays down the hook on these adaptations of traditional songs, adapted from earlier performances by artists such as Mississippi John Hurt, David Van Ronk (five tunes), Taj Mahal, and others. And he doubles down by singing in an affected drawl, loudly, driving home the lyrics in a manner not unlike those who sang field hollers of these and other songs back in days before amplifiers-when the music was played on guitars and fiddles on hot, dusty locations in the delta and Appalachian hills.

The hot mic vocals click on some tunes, and not so much on others. “Going Down the Road Feeling Bad” opens, and it works fine. “Shady Grove,” adapted from a Mahal version, is sung full bore and loses some impact by having the near-shouted words draw the listener away from the Marks’ very expert banjo accompaniment. The tale of John Henry is related on “Spike Driver Blues,” and here the overloud vocal doesn’t really mesh with the saga of his wife Pollyanne and her red hammer.

On “Please See That My Grave Is Kept Clean,” based on a Van Ronk arrangement of a Blind Lemon Jefferson chestnut, there is a better matchup between Marks’ vocal and his understated banjo accompaniment—it delivers the morose message of the original. “You can dig my grave with a silver spade/ And lower me down with a golden chain.” Another Van Ronk adaptation is “He Was a Friend of Mine,” which works well on a tune that has launched versions by a multitude of artists from Dylan to Wille Nelson to the Byrds.

The familiar melody of “Green Green Rocky Road” is nicely laid down by Marks on his banjo, then sung, in a bit more laid-back fashion, and the result is a disc highlight. Marks’ original “We’re Gonna Have It All” features some of the fanciest banjo playing on the entire project, as he sings, “Pretty as a rose, sharp as one too/ Better treat her right and she’ll make your dreams come true.” It fits right in on a disc of time-honored traditional tunes. “Tell Old Bill” and “Hang Me on Hang Me” are more old-fashioned standards inspired by earlier covers by Van Ronk, an important figure in the “Folk Scare” of the 1960s.

Leadbelly’s ¾ time “In the Pines” is nicely rendered, and the rough-cut presentation works to add oomph to it, and the closer is “Pretty Peggy-O.” The brisk country standard that Dylan and others have recorded is given a rousing version that deserves to be earlier in the program. Charlie Marks’ debut project Honey Baby is for fans of traditional, acoustic folk/country blues, and shows not only his talent but also his reverence for the forms.