January 2023
Vol. 22, No. 4
Catching Up with Michael Tiernan by Paul HormickMarch 2017
Back with a Bang! Java Joe's Reunion at San Diego Folk Heritage by J.T. MoringMarch 2017
Book Review: The Philosophy of Modern Song by Bob Dylan by Ted BurkeMarch 2017
Rick Nash: Bass Man in Demand by Wayne RikerMarch 2017
If Music Be the Food of Love, Play On: Dually Noted Pairs Fine Food and Fine Music by Paul HomiczMarch 2017
Mod Revivalists the Trebels to Reunite for 40th Anniversary Show by Jim TrageserMarch 2017
Harold in the Land of Jazz by Bart MendozaMarch 2017
Sephardic Dance and Music by Yale StromMarch 2017
Loretta Lynn: A Special Tribute to the Queen of Honky Tonk by Terry Paul RolandMarch 2017
Ben Grace Gilmore: It's All About Building Community by Sandé LollisMarch 2017
Advertisements 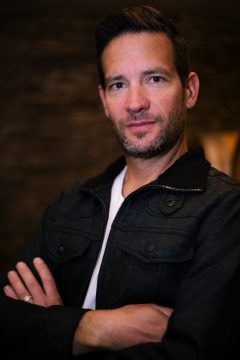 When people think of a singer/songwriter, they ought to think of Michael Tiernan. Gifted with a natural stage presence, his beautiful high tenor is the perfect vehicle for his songs, almost all of which touch on deep emotions. Charismatic, he easily connects with his audience.
And when they think of someone who keeps his nose to the grindstone, who works at his craft, they should think of Tiernan as well. His schedule is filled with performances throughout southern California. (Last month saw him performing at Mammoth Mountain.) He is always writing new songs, and this month Tiernan releases his sixth CD, Love and a Gun.

If the grist of a singer/songwriter is experience, then Tiernan certainly chose the right line of work to go into. Despite his youth, the Redlands native has lived several lifetimes. By the time he was in his mid teens he was already a cancer survivor. At 18, he was doing the equivalent of being a Dead Head for Jesus, travelling around the country in a van with a bunch of latter day Catholic hippies who offered spiritual retreats for young people. Guitar slung over his shoulder, he traveled around Europe and spent time with monks in desert monasteries.
He came back to the U.S., this time to the Midwest, where he attended and graduated from Franciscan University of Steubenville. He then entered the seminary in Denver and continued his studies for the priesthood in Rome. He left the seminary, fell in love, got married, and now has a family. While you can still hear influences of his earlier religious life in his music, family and raising children are now fodder for his tunes. “There is always new inspiration for songs, and I’m glad the material keeps coming,” he says.

Tiernan doesn’t get into specifics but he says that he eschews getting into political rants on social media. However, he says that a lot of his songs are inspired by how he sees things unfolding in the world. The title track to the new CD, “Love and a Gun,” was initially inspired by his reaction to the Paris attacks of 2015 that killed 130 individuals. “And I finished that song the day of the San Bernardino attacks, which is where I’m from,” says Tiernan. “The trajectory of the song is me processing all that.” The lead song, “Your Attention,” is a rock tune in which he critiques our addiction to our phones and other tech devices, as we constantly text, check for messages, and log on Facebook for the latest updates.

“I started the song “Tired Eyes” six years ago,” says Tiernan. “It’s been sitting on my desktop, and I just rediscovered it. I came back and finished it this past year.” At other times he writes quickly. His approach to putting a song together “depends on what tool is at hand.” The songwriting process could start with a pen in his hand or by strumming some chords on his guitar. “Some things come from journaling,” he says. “Everything I write is universal in its own way. Right now I get a lot of inspiration from my young family.”

For Tiernan there is a world of difference between Love and a Gun and the material that he first produced years ago. “I’m very pleased with the direction this disk took,” he says. “I think that the writing is better. There’s more soul to what I’m doing now. This CD and my last CD, Inside Your Head, I love how they came out sonically, too.” For both of the recordings he worked with veteran bassist/writer/producer Andre de Santanna, who has received Grammy nominations for his work with Herb Alpert and Ziggy Marley. Inside Your Head, which came out in 2014, was positively received, but Tiernan confesses that getting sidetracked on other projects, he did not promote his fifth CD as much as the music deserved.
When I spoke to Tiernan in last month, he was planning to head up to Los Angeles to start work on yet another EP. At the time, he had a handful of songs and was deciding which ones to record. He was also prepping for work on a video for “Tired Eyes.”

If that wasn’t enough, plans are in the works for yet another CD, this time a live one. Tiernan has been performing at En Fuego in Del Mar every week for the last ten years. The shows, which are called “Acoustic Wednesdays” are pretty exciting, and he wants to capture it all on a recording. Details will be firmed up, once a recording date is set.

The CD release of Love and a Gun happens on the 25th of this month at Brick 15, the intimate coffeehouse/music venue in Del Mar, although if you’re really eager for this one, purchase and downloads are available on the March 22.