January 2023
Vol. 22, No. 4
Becoming Jules Stewart by Lizzie WannMay 2021
Back with a Bang! Java Joe's Reunion at San Diego Folk Heritage by J.T. MoringMay 2021
Book Review: The Philosophy of Modern Song by Bob Dylan by Ted BurkeMay 2021
Rick Nash: Bass Man in Demand by Wayne RikerMay 2021
Mod Revivalists the Trebels to Reunite for 40th Anniversary Show by Jim TrageserMay 2021
If Music Be the Food of Love, Play On: Dually Noted Pairs Fine Food and Fine Music by Paul HomiczMay 2021
Harold in the Land of Jazz by Bart MendozaMay 2021
Sephardic Dance and Music by Yale StromMay 2021
Loretta Lynn: A Special Tribute to the Queen of Honky Tonk by Terry Paul RolandMay 2021
Ben Grace Gilmore: It's All About Building Community by Sandé LollisMay 2021
Advertisements 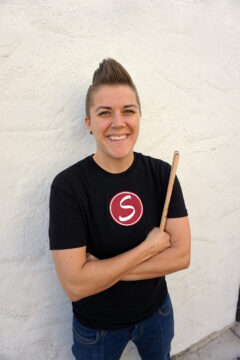 I follow drummer Jules Stewart on Instagram (@adventuresofjj). A few months ago, she asked people to tell her one of their favorite albums so she could expand her musical knowledge. She then posted her own little mini reviews of each album (captured as one of the highlights on her IG page). I remember thinking it was a cool idea and the fact that she actually did listen was equally cool. But she didn’t just listen, she took in the music and delivered generous praise and honest critiques. Her enthusiasm about discovering this new-to-her music was deliriously wholesome.
So, when I was interviewing her for this article, I was delighted to learn that she did the same thing to friends in high school. It was an insight to her personality that was echoed by a couple of her current bandmates: that she is always trying to find ways to grow and learn, to become a better version of herself.
From a Wee Bairn (Since She Was a Child)
The first thing you should probably know about Stewart is she comes from Scottish stock. And although you would have to “go back many generations” to find the last of her Stewarts that were born in Scotland, the heritage and the ancestry were very important to her father who made it important to his family, mostly by way of music. Stewart explains, “I was surrounded by Scottish music, went to the Scottish Highland Games, and listened to my dad practicing the bagpipes. My older brother and sister and I were encouraged to pick a Scottish activity to participate in. I started Scottish Highland dancing when I was four years old. When I was eight, I decided the Scottish snare drummers were really having more fun than I was, and I asked my parents if I could do that instead. I joined a kids’ pipe band and took some lessons and eventually made the switch to a drum set at about 12 years old.” 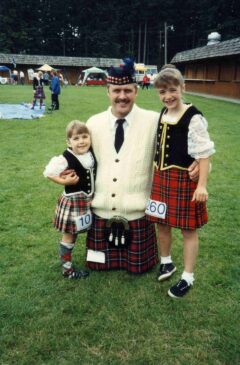 Jules and her sister with their dad at the Highland Games ca. 1991. 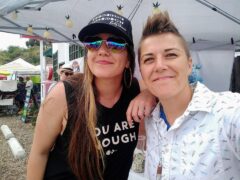 Jules with Lindsay White at the inaugural Lady Brain Festival in 2019. 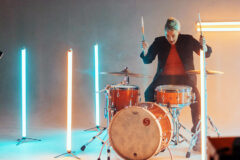 Against All Odds: Saying Good-bye to our Friend Mark