October 2022
Vol. 21, No. 13
Beatles Fair Returns to Queen Bee's by Bart MendozaMarch, 2022
Hemisphere: Positively Energized and Ready to Rock by Laura PrebleMarch, 2022
Albert Cummings Is Good with his Hands by T.E. MattoxMarch, 2022
Book Review: Mandolin Man, the Life of Roland White by John HighkinMarch, 2022
Farm Truck: Coming to a Venue Near You by Wayne RikerMarch, 2022
Songbirds Take Flight by Charlene PulsonettiMarch, 2022
Performers and Artists Contribute to the Audubon Society’s Birdsong Project by Paul HomiczMarch, 2022
Finding the Balance Between Science and Music: An Interview with Dr. Hima Joshi by Catherine BarnesMarch, 2022
Jazz 88's Joe Kocherhans Bids Farewell to a Long and Illustrious Career by Wayne RikerMarch, 2022
Tiki Oasis Celebrates 20 Years of Exotica Mayhem and Fun  by Andy RasmussenMarch, 2022
Advertisements 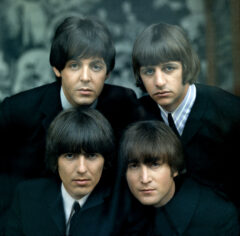 The 19th Annual San Diego Beatles Fair takes place on March 26 at Queen Bee’s in North Park. It’ll be a full day of Fab Four-inspired fun, with something for just about every musical taste. “We are so happy to be back!” said event producer Alma Rodriguez. “The Beatles music is all about love and positive things, all of which the world really needs right now,” she continued. “I’ve tried really hard to put together an event that will please diehard fans and also be a great, fun introduction to the Beatles songs for kids.”
This year’s Beatles Fair includes an outdoor vintage clothing and collectibles market as well as music both inside and outside Queen Bee. In addition to the mainstage, there will be an acoustic patio stage hosted by Nico Peters, as well as an outdoor rock ‘n’ roll stage hosted by Christopher Leyva. “It will be set up so that there will always be live music happening,” Rodriguez said. “When one stage is being set up for a performer, there will still be other stages to enjoy.”
Beatles Fair was founded in 1995 by San Diego’s Come Together fan club, with Rodriguez continuing the event post 2012. Over the years a who’s who of Beatles-related performers have played at the fair, many more than once, including former Beatles drummer Pete Best, Tony Sheridan, Billy Preston, Denny Laine (Wings/Moody Blues), Billy J Kramer, Joey Molland (Badfinger), Jackie Lomax, Gordon Waller (Peter and Gordon) and Liberty DeVitto. One of the few times that Pete Best and Tony Sheridan ever played together, post Hamburg days, was at Beatles Fair.
Meanwhile, a host of luminaries have also taken part, such as film producer Walter Shenson (A Hard Day’s Night, The Mouse That Roared), author Chuck Gunderson, Capitol Records exec Ken Mansfield, and early days Liverpool promoter Sam Leach. 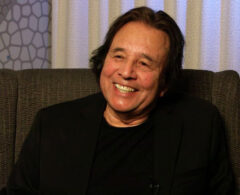 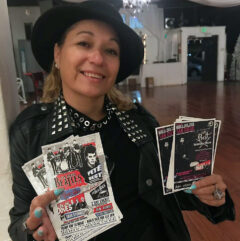 This year’s headliner is iconic Mexican-American rock ‘n’ roll pioneer, Chris Montez. Known for a string of hits in the 1960s that include such classics as “Some Kinda Fun,” “Call Me,” “The More I See You,” and, of course, “Let’s Dance,” Montez toured England with the Beatles and Tommy Roe in 1963. For the Beatles Fair he will tell stories about that legendary road trip and his amazing career in music. Montez cites “And I Love Her” as his favorite Beatles tune. “I’m looking forward to seeing all my fans and playing rock ‘n’ roll for everybody,” he said.
Numerous performers are making their first appearance at Beatles Fair. Particularly notable amongst them will be Gilbert Castellanos’ Young Lions Jazz Conservatory, featuring students from the acclaimed music school. “I’m really excited about this performance in particular,” Rodriguez said. “The Beatles music can be interpreted in different ways, in different genres, and this is the perfect example. It’ll be great to have kids showcasing their talent. It’s a wonderful addition to our event.”
March 26 will also see the Beatles Fair debut of veteran rock singer Laurie Beebe Lewis and her new band, the Electric Underground. Lewis was a member of both the Mamas and Papa’s and the Buckinghams and will perform songs from her days with both bands, as well as a selection of classic songs from the 1960s, including, of course, the Beatles. She thinks it’s only natural that new generations continue to discover their music. “Because their music never gets old,” she said. “There’s a phase of their career for whatever mood you’re in, and their influence is still being felt in music today.” Asked to pick a favorite Beatles song, she rattles off a long list of tunes. “I need to pick one song? Impossible!” she said. 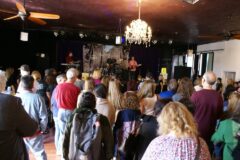 Attendees enjoy the music at a past Beatles Fair.

It’s also rock trio the 63eatles’ debut at the Beatles fair. “It’s our first invite, so we are incredibly honored and grateful,” said the band’s James Tuckwell. “We’re looking forward to meeting and hearing some great bands and hanging with everyone who attends.” He notes that the Beatles music “still sounds fresh, modern, and relevant,” Tuckwell said. “From “Please, Please Me,” to “The End,” the Beatles were enthusiastic and innovative on every recording. They had the added genius of the Abbey Road [studio] crew making them sound crisp—the perfect partnership.” His top song pick? “My favorite is “Yes It Is,” which I think was a B-side,” Tuckwell said. “Lennon hated it, but the angst in his voice resonated with me from the first time I heard it, young and in love, circa mid-1980s.
Author and musician John Borack (Goldmine magazine) will be at the Beatles Fair promoting his new book, The Beatles 100: One Hundred Pivotal Moments in Beatles History. For him, it’s clear why the Beatles’ songs are still so popular all these decades later. “I think their music still resonates so much because the songs are timeless,” he said. “Very little of the music or lyrics sound dated and, as Paul McCartney once said, they were generally singing about love and positive things everyone can relate to.” Borack’s favorite tune is “You Never Give Me Your Money” from Abbey Road. “To me, it includes a little bit of everything that made the Beatles great: Paul on the piano at the beginning as sort of a balladeer; pristine vocal harmonies; some cool lead guitar and amazing bass work; and Ringo’s always-inventive drumming as the song turns into a rocker.” 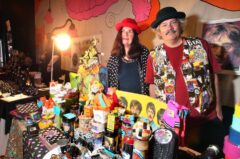 Chris Leyva of Falling Doves considers the Beatles to be an essential influence for today’s musicians. “The modern era of rock ‘n’ roll starts with them,” he said. “But it’s more than that; their songwriting works in all different styles and the message they send through their music is inspiring,” Leyva continued. “And it’s so much fun to play! My favorite song is “I Saw Her Standing There,” almost 60 years after it was released. It’s still a sure-fire way to get people on the dance floor.”
Other performers set to take part include John Lennon tribute artist John Leo, Courtney McKenna, Porcelain Hill, and Tijuana-based group, the Revolution Band. Also appearing will be True Stories, once again performing an exclusive themed set for Beatles Fair. In keeping with the Beatles 1963 tour motif, this year the group will include a few fab four-related songs from tour mate, Tommy Roe. The band’s lineup includes an all-star group of locals including Scott Mathiasen (S Mathias), Ron Silva (The Crawdaddys, The Nashville Ramblers), Greg Smith, Billy Tisch (The Footloose Band), and Alicia Previn.
“It’s a really nice mix of musicians,” Rodriguez said. “The bill has been curated, so you won’t be hearing the same songs over and over,” she noted. “It’s wonderful to blend classic and new, from a legendary performer such as Chris Montez, an icon in the Latin American community, to up-and-coming performers from the Young Lion’s Conservatory, and lots more of course, all brought together by the music of these four incredible musicians.”
Rodriguez acknowledges that putting together Beatles Fair is a hard job, but she’s more than happy to do it as a true labor of love. In fact, considerations are already under way for the 20th edition of Beatles Fair. “It is a lot of hard work,” she said. “There are times that make me doubt my sanity, but at the end of the day, when you see the results of the event and all the happy smiling faces, you know it’s all been worth it.”
www.sandiegobeatlesfair.com

Band of Brothers: The Liggins Brothers