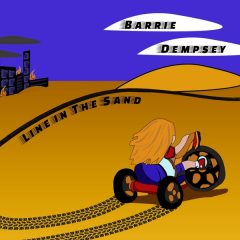 Line in the Sand is the new EP by Barrie Dempsey, a well-traveled singer-songwriter who started out in New Jersey and transplanted to the Left Coast in the seventies. He played locally while with the band Amber, getting recognition for his songwriting and gigging all over the country. His music is soft folk rock, playing guitar, harp, keyboards, and flute; the album shows the trademarks of an old pro who knows how to put together and arrange quiet, romantic and personal folk songs.

Nicely recorded in La Mesa at Track Star Studios, the set kicks off with “Open Mic,” the first of several folk ballads with lots of acoustic guitar, harmonies and stutter-step pacing as it relates the ins and outs of singing original in clubs on sign up and sing nights. The title tune has much the same musical feel, but is more personal, about regrets and a moral code, “you can take the easy road…throw away the rules, get over that line/ It’ll all come back to get you, it’s a matter of time.” Shannon Dempsey joins for some sweet harmonies above soft fingerpicked guitars on “I’ll Love You and You’ll Love Me,” a disc highlight.

“Draw Like Michelangelo” is a nicely rendered love song that also enlists Shannon, whimsical about lovers taking trips to Jupiter and drawing like the masters; another very strong tune that with “I’ll Love You” shows Dempsey to have a depth of talent for such romantic ballads. Folk fans should enjoy his new EP.