February 2023
Vol. 22, No. 5
Back with a Bang! Java Joe's Reunion at San Diego Folk Heritage by J.T. MoringJanuary 2023
Jeff Beck: A Tribute by Ted BurkeJanuary 2023
Marcus Petronius Bashore: The Best Seat in the House by T.E. MattoxJanuary 2023
Pacific Wave: A Surfin’ Safari January 2023
The Winter Dance Party 1959: The Night the Music Lived by Terry RolandJanuary 2023
Book Review: The Philosophy of Modern Song by Bob Dylan by Ted BurkeJanuary 2023
Rick Nash: Bass Man in Demand by Wayne RikerJanuary 2023
If Music Be the Food of Love, Play On: Dually Noted Pairs Fine Food and Fine Music by Paul HomiczJanuary 2023
Mod Revivalists the Trebels to Reunite for 40th Anniversary Show by Jim TrageserJanuary 2023
Harold in the Land of Jazz by Bart MendozaJanuary 2023
Advertisements 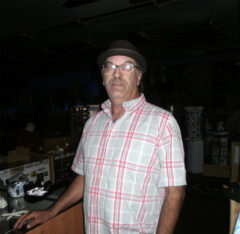 It was over 30 years ago that Java Joe Flammini opened the first incarnation of his legendary string of performance venues, lasting until the Old Town version closed four years ago. On Sunday January 8, Joe—in cooperation with San Diego Folk Heritage—presents a one-time reunion show, featuring some noteworthy hand-picked alumni of that venue. The show was originally scheduled for January 2022, but had to be postponed due to the Covid spike. Joe worked hard to get the same crew lined up this year. Most of the performers are long time SDFH favorites as well as Java Joe regulars. Here’s the lineup of the usual suspects.

Tim Flannery. Baseball star, band leader, and roots music revivalist, he’s back in the saddle, running full speed ahead as seen at his recent Star of India performance.
Billy Galewood. Musician, comic, and force of nature, formerly known as Bushwalla, is on tap to emcee the show, but no one (except maybe Billy) seems to have a good idea what that might look like. 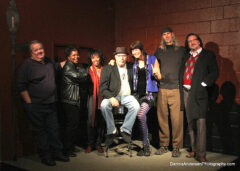 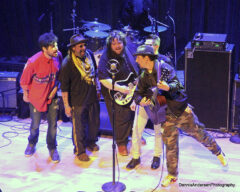 Berkley Hart. Maybe you caught their recent Christmas show or have seen Jeff playing out regularly with his new band, The Banned.
Gregory Page. Gregory played a fun show July for Folk Heritage with his buddy Jack Tempchin and has since done one of his European tours.
Lisa Sanders. These ladies are always a crowd favorite, as evidenced by her 2021 induction to the San Diego Music Hall of Fame.

This crew goes way back, so expect any number of combinations and permutations of performers.  The show is expected to sell out – please buy your tickets in advance!

Java Joe himself will, of course, be on hand, free from the duties of selling tickets, mixing drinks, and herding audience and band members. After serving up literally thousands of shows over the years, he can sit back and enjoy the show for once! All funds collected at the show go to Joe and the performers.

You can brush up on Java Joe’s history in this 2014 Troubadour profile, this 2016 Union-Tribune coverage of the 25th anniversary show, and this 2018 Reader article on the last days of the Old Town venue.

The Winter Dance Party 1959: The Night the Music Lived

Book Review: The Philosophy of Modern Song by Bob Dylan